This Video Of A Weapons Dump Exploding In Ukraine Is Insane 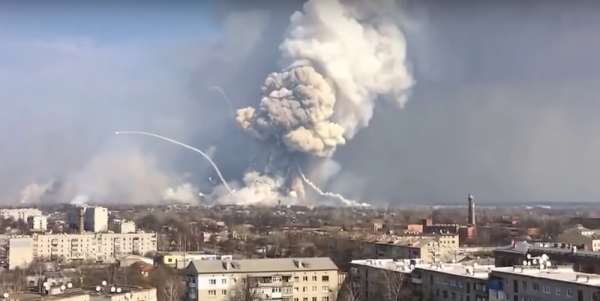 Amateur video footage out of Ukraine shows a military munitions depot exploding in dramatic fashion. The disaster occurred March 23 in the eastern Ukrainian town of Balakliya, and reportedly was the result of a fire started in an act of sabotage, according to Al Jazeera, citing Ukrainian military officials.

Ukrainian officials have linked the incident to Russian-backed separatists nearby.

“We have a 'friendly' country – the Russian Federation,” Ukrainian Defense Minister Stepan Poltorak told Reuters. “I think that first of all it could be representatives who help the (separatist) groups that carry out combat missions.”

The weapons depot was just 100 kilometers from territory held by the Russian-backed separatists who have been fighting Ukrainian government forces since 2014,according to the BBC. The weapons destroyed Thursday were used to support the Ukrainian military forces in that fight.

While investigators are looking into how the fire started, with sabotage being the most likely suspect, one official interviewed by the BBC said that the separatists could have used a drone to ignite the blaze. The use of a drone to destroy that same facility was reportedly attempted in December 2015.

No deaths have been reported by the government, which is remarkable considering the scale of the explosions, but roughly 20,000 residents of Balakliya had to be evacuated from the region.

The footage is insane, with subsequent secondary explosions stacking up and rockets cooking off and firing, some leaving smoke trails all over the city. According to the Al Jazeera report, the weapons dump held more than 10,000 tons of munitions and missiles.

Take a look below.