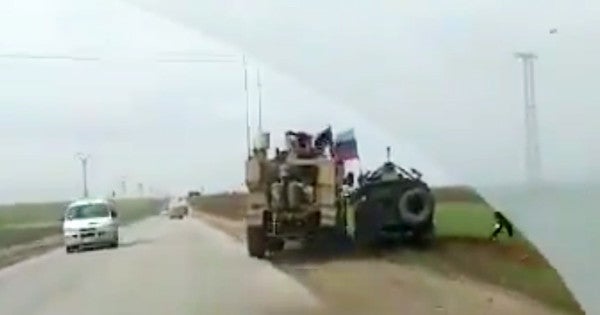 The Russian vehicle almost hits a civilian bystander who had been walking along the shoulder. It appears that the American and Russian truck also make contact at one point, before they both slow to a stop.

“We're aware of the video and we're looking into it at this point,” Navy Capt. William Urban, a spokesman for U.S. Central Command, told Task & Purpose.

As The War Zone notes:

Incidents between U.S. and Russian forces in northeastern Syria have been increasingly common for weeks now, though they have typically involved American troops block the movement of Russia's forces. There have been some reports of more physical altercations, including a fistfight in January.

This does appear to be the first known incident of Russian and American convoys actually duking it out on Syria's roadways, which points to a serious escalation in tensions. It's in some way reminiscent of a spate of aggressive altercations between Russia's combat jets and American planes in the skies over the country that seemed to subside two years ago.

Last week, American troops came under fire by pro-regime forces in the same area. A soldier on that patrol received a “superficial scratch” and has since returned to duty, a spokesman for Operation Inherent Resolve said.

A video of that incident showed Russian forces nearby just watching it happen.

~popular_source-pageview
How The Other Half Fights
news
Russia
syria