Frozen compass, frigid wind — How Green Berets would airdrop into the Arctic in a future war

The minus-100-degree Fahrenheit wind left each operator “to contemplate the finer points of frostbite and temperature at which eyeballs freeze.” 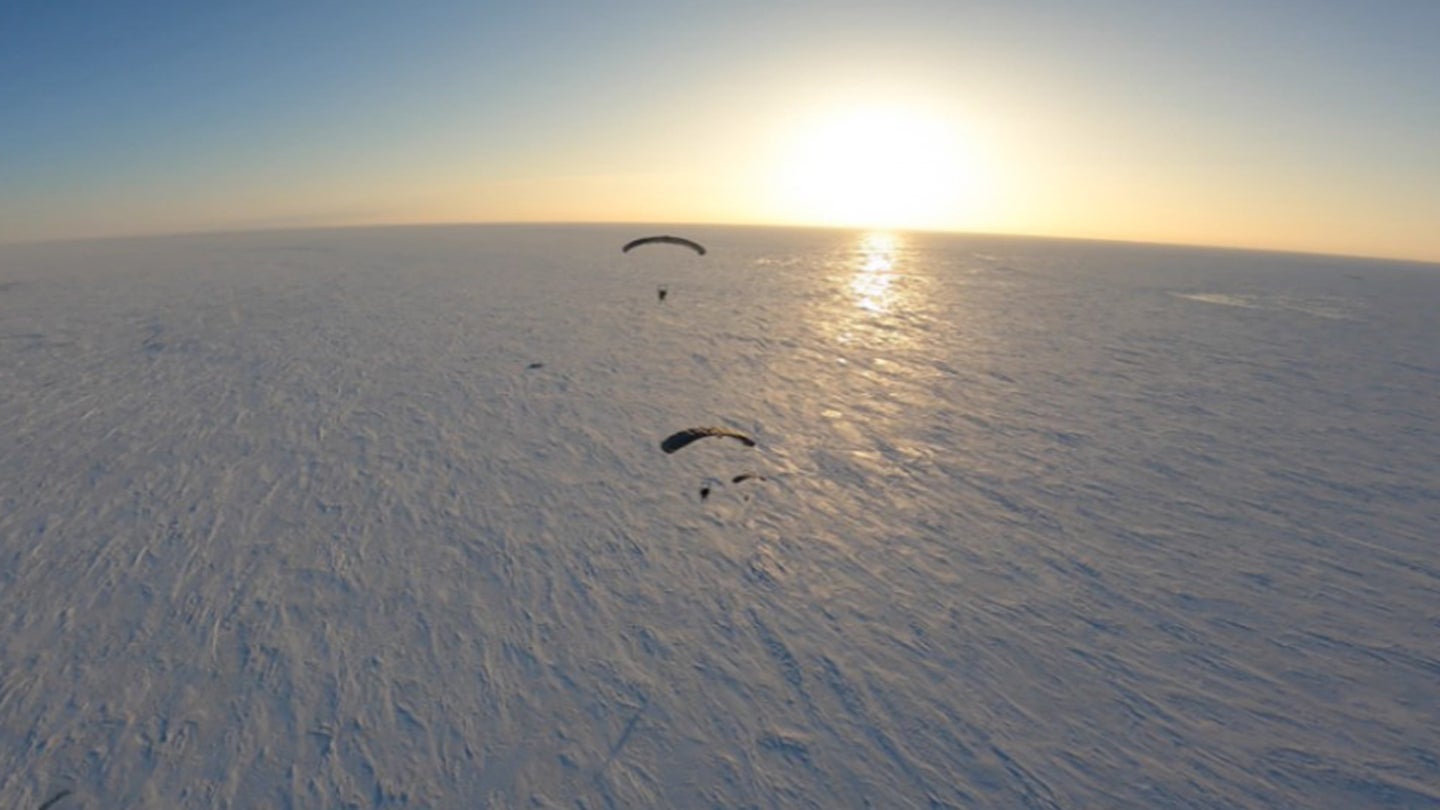 Everybody knows the Arctic is cold, but a new essay by two military officers reveals just how much the frigid weather there can complicate military operations like jumping out of an airplane.

It was April 2021, at the end of a six-hour flight from Colorado Springs, Colorado. The Green Berets were en route to practice military freefall and parachuting as part of the exercise Vigilant Shield, one of several training events the U.S. military holds with its allies to prepare for fighting in the frigid regions of the Arctic.

Satterfield and Jensen explained that the temperature in the C-17’s cargo compartment had been deliberately lowered to 32 degrees Fahrenheit so that the eight soldiers from 10th Special Forces Group (Airborne) could get used to the freezing weather they were about to jump into.

As it turns out, the outside air was a little colder than the Green Berets might have liked. When the green light came on and the soldiers leapt out over the white expanse of the Alaska North Slope, the minus 100-degree Fahrenheit wind ripped away the modified snowmobile face shields each had been wearing to protect against the cold, “leaving each operator to contemplate the finer points of frostbite and temperature at which eyeballs freeze,” the officers wrote.

After 40 seconds of freefall, the soldiers pulled their ripcords, where they discovered that it takes an additional two to three seconds for the canopy to fully deploy in the freezing cold. Even with the canopy open, the team’s troubles were not over: the temperature was around minus 45 degrees Fahrenheit, so cold that the batteries in their GPS and communication gear failed, and their oil-boat compasses designed to work in extreme temperatures were frozen. On top of that, the team also had trouble steering their canopies: the risers had frosted and their heated gloves were clumsy.

The soldiers managed to land safely, but the challenges illustrate just how much U.S. service members have to learn about operating on the northern borders of their home soil.

U.S. special operations forces’ ability to fight in the Arctic has atrophied over the last two decades, Satterfield and Jensen wrote, and troops need a refresher as adversarial nations like Russia and China seek to exploit new shipping routes, oil and natural gas deposits, and valuable metals made accessible by receding ice.

“Just surviving in the Arctic requires extensive training and appropriate equipment prior to being deployed to the region,” the two wrote. “However, to thrive in the Arctic, defined as the ability to conduct SOF’s core activities, requires consistent immersion and operational experience in this environment.”

U.S. Army Special Forces are not the only ones training at the top of the world. In 2021, a group of Air Force survival, evasion, resistance, and escape (SERE) specialists spent a week at the so-called “Cool School,” located well inside the Arctic Circle at the northernmost point of Alaska. Students contended with 50-mile-per-hour winds, negative 60-degree temperatures, and constant near-darkness as they learned how to build snow caves and igloos, signal for rescue, and learned from local Indigenous people how to find food and stay healthy.

“It doesn’t matter if you’ve got the best equipment or aircraft in the world,” said Maj. Tyler Williams, the commander of the instructors at the school, at the time. “If you don’t have the right training, the Arctic environment will kill you.”

With their small footprint and extensive training for long missions in tough or sensitive areas, special operations teams are an ideal force for the Arctic, Satterfield and Jensen wrote. The isolated indigenous communities living in the Arctic also make it an ideal place for modern Army Special Forces, which were established during the Cold War precisely for helping “indigenous guerrilla” forces fight America’s enemies.

As of 2018, there are 122,977 Alaskans living in subsistence areas, an area where use of fish and wildlife resources is a principal characteristic of the economy, culture and way of life, according to the Alaska state government. Between 2012 and 2016, about 55.3% of people living in those areas identified as Alaska Native. Members of those communities could provide essential lessons to U.S. service members who may have to fight in the Arctic, three Special Forces officers wrote in a separate essay published on Monday.

“Things as simple as how to conduct route planning, types of equipment to bring, movement over terrain, and medical care in the Arctic are things that indigenous communities have developed and mastered over centuries; yet, outside of individual efforts, that experience has not been translated into military … standard operating procedures,” wrote Army Majors W. Barrett Martin, Michael Tovo and Devin Kirkwood, all members of the 10th Special Forces Group. “Nor has it been widely integrated into the Alaskan National Guard, whose footprint has been reduced to a presence mostly concentrated around Anchorage and Juneau.”

The airmen who trained at the “Cool School” are also well aware of the importance of working with the locals.

“Before all of this modern equipment, it was the cultural values and practices that allowed them to thrive in this region,” said Williams. The school is located near Utqiaġvik, a city of about 4,400 people, 61 percent of whom are Iñupiat Eskimo, according to the city website.

“There’s a lot of people who live across the Arctic,” said Master Sgt. Garrett Wright, superintendent of the Arctic Survival School. “Students have to understand that they might not be picked up by American forces and they may not even be military.”

Not only could indigenous populations help teach U.S. troops how to operate in the Arctic, but they could also provide vital intelligence or logistics support in a fight in that region, the Green Berets wrote. The U.S. took advantage of this in World War II, when 6,300 Alaska Natives volunteered to serve in the Alaska Territorial Guard, where they conducted surveillance and support activities along the state’s remote coastlines, wrote the majors.
“Assembled to defend against potential Japanese invasion, the ‘Eskimo Scouts’ were the U.S. military’s eyes and ears along the territory’s 6,640-mile coastline,” wrote the National Museum of the American Indian on its website.

Though that outfit closed down after the war, Canada has a similar group called the Canadian Rangers, a reserve force of 5,000 people made up of “Inuit, First Nations, and Métis and non-Aboriginals, depending on each community’s local demographics” according to a Rangers website. In February, the Canadian Rangers traveled 150 miles through the Yukon with seven members of the U.S. 19th Special Forces Group (Airborne). This was a separate group of Green Berets from the ones in the 10th Special Forces Group who jumped out of the C-17 in April. But they too realized they had never experienced anything quite like the Arctic.

“During the operation, the team experienced temperatures as low as minus 58 degrees Fahrenheit, whiteout conditions with less than 10 feet visibility, and the new experience of ‘polar bear watch’ each evening,” Satterfield and Jensen wrote. “[T]hese valuable skills will atrophy unless they continue to train and exercise in this region/environment.”

Those skills have a particularly short shelf life because there are not many opportunities for U.S. troops to receive genuine Arctic survival training, which is not quite the same as cold weather training in upstate New York or alpine training in the Rocky Mountains, the three Special Forces majors wrote.

Even the most qualified mountain team in a Special Forces regiment would not be considered Arctic-capable, the majors said. What makes the Arctic unique is the “near-constant darkness and cold in the winter juxtaposed with near-constant light and impassable terrain in the summer months,” due to the swampy conditions caused by summer thaws, they wrote. Other unique characteristics of the Arctic include its lack of trees, the permanent snow and ice in some areas and the grasses, sedges, mosses and low shrubs in others, according to the University of California-Berkeley.

Sending Army Special Forces to the Arctic could solve two problems at once, the majors wrote. First, it could provide Green Berets with a valuable and consistent way to train for the unique Arctic environment. Second, by deepening their relationship with indigenous communities, the soldiers could help put more eyes on an isolated and possibly contested part of the world. However, the U.S. government needs to help indigenous communities if it hopes to be helped by them, the majors wrote.

Many Alaskan communities do not have the infrastructure to support food security, health care, education or commerce, Sen. Lisa Murkowski (R-Alaska) said in February. Examples include a lack of broadband internet, poor housing, and stressed supply chains that cannot deliver food, sanitation or medical equipment, she said. The Special Forces majors argued that if the U.S. government does not help those isolated communities, other countries like Russia or China might try to fill the void to gain influence there.

Both Satterfield and Jensen and the trio of majors seem to agree on one thing: the Arctic may be cold, but by using special operations to build relationships with the people living there, they might be able to get a warmer welcome.