Army Under Secretary Ryan McCarthy said the program is a way to "draw closer with local communities." 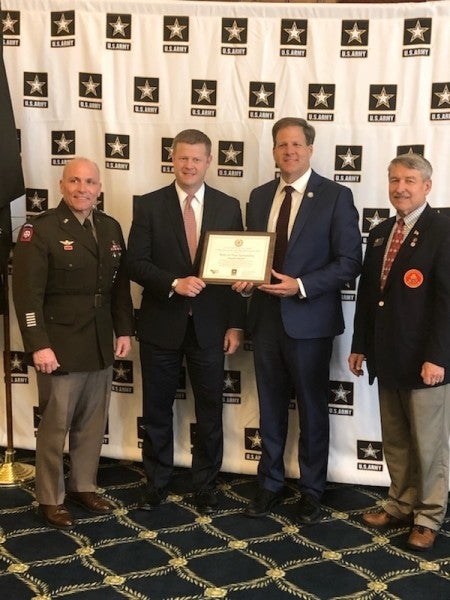 CONCORD, N.H. — The U.S. Army signed onto a partnership with the state of New Hampshire on Wednesday in the hopes of sharpening its recruiting edge.

Army Under Secretary Ryan McCarthy traveled to the state to sign the Partnership for Youth Success (PaYS) Program agreement with Gov. Chris Sununu, who called it a “great opportunity for the state of New Hampshire.” The agreement will guarantee soldiers who sign onto the program a job interview with the state when they complete their service.

PaYS isn't new — it launched in 2000 and has hundreds of partners, including Lockheed Martin, Kraft Foods, Southwest Airlines, dozens of city police departments and individual state agencies. But New Hampshire is the third state to sign onto the program, joining Hawaii and Wisconsin.

The Army is facing a number of recruitment hurdles of which Under Secretary Ryan McCarthy is well-aware. One of the biggest challenges in New Hampshire is the thriving economy — “one of the strongest in the country,” as McCarthy told Task & Purpose. Low unemployment historically translates to lower recruitment levels.

Maj. Gen. Frank Muth — the head of Army Recruiting Command, who attended the signing ceremony on Wednesday — told Task & Purpose that the biggest problem he consistently sees for recruiting is a lack of information. That is, of course, why the Army has renewed its recruitment push in 22 selected cities outside the service's typical comfort zone.

The challenges the Army faces in New Hampshire are reflected in the numbers — in fiscal year 2018, the active duty Army aimed to have 311 recruits, but came about 100 short in recruiting only 212, according to Army Recruiting Command spokesperson Lisa Ferguson. Army reserves had the same problem, with a goal of 95 recruits, but only getting 44.

PaYS is just one way that the Army is hoping to make itself more appealing to potential soldiers, by giving them employment opportunities for when they leave the service.

By partnering with the state, soldiers would have a guaranteed job interviews with a state agency or department. There's no guarantee of a job, of course — that's on the individual soldiers — but the opportunity is there.

At the signing ceremony, McCarthy said the program is a way for the Army to “draw closer with local communities, a way in which young men and women can have a bridge to the work force and opportunity to serve in the U.S. Army, whether that's three or five years, or 33 years.”

SEE ALSO: How To Fix The Army's Recruiting Crisis