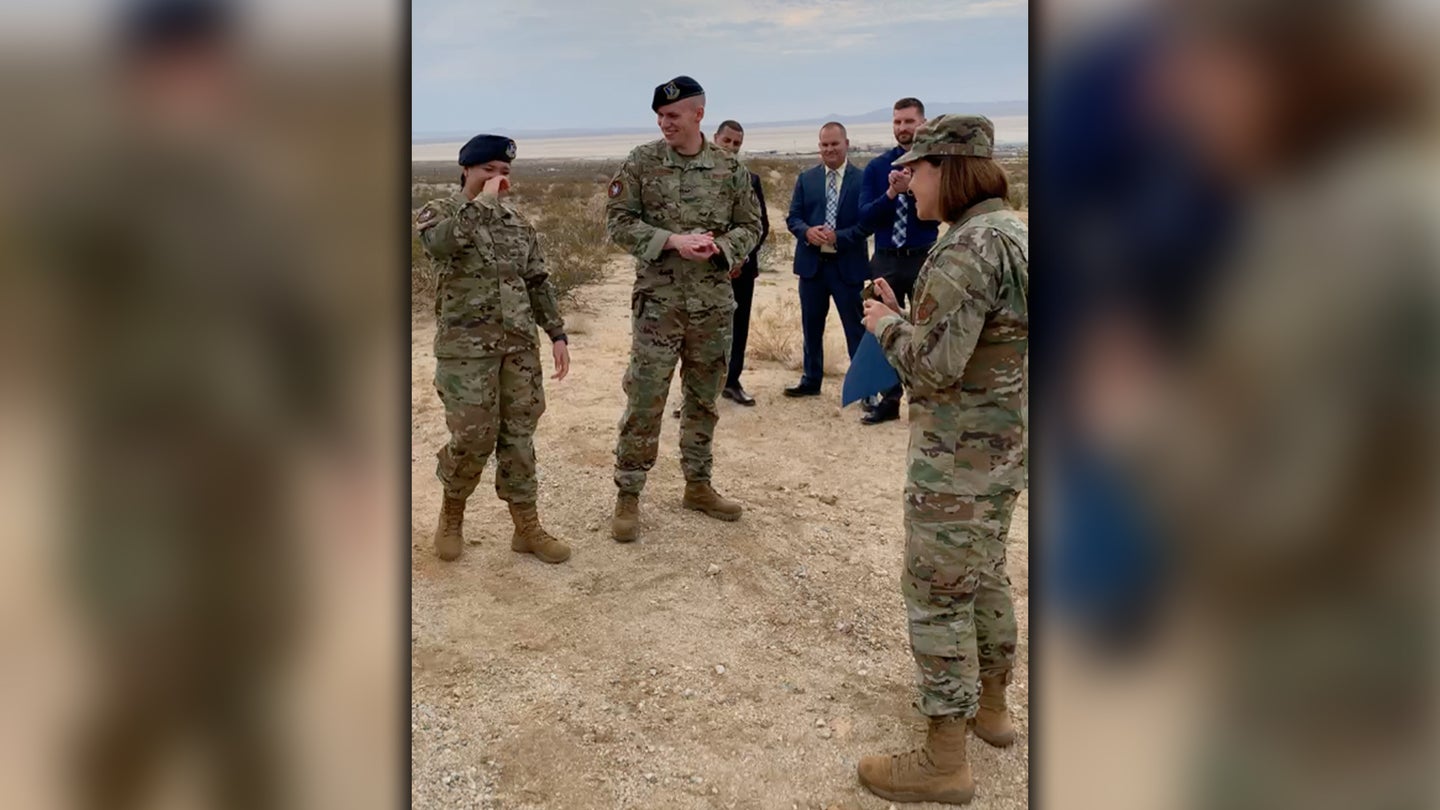 Chief Master Sergeant of the Air Force JoAnne Bass surprised an airman with an on-the-spot promotion ceremony on Tuesday, but not before having a little harmless fun with her first.

“Jenkins, did you know you’re out of uniform?” Bass asked then-Airman 1st Class Ivanna Jenkins, of the 412th Security Forces Squadron at Edwards Air Force Base in California, according to a video posted to Bass’ Facebook page.

Like any junior airman caught in a uniform goof by a superior, Jenkins must have had a minor panic, looking around her uniform for signs that she was not up to regs. “What?” she asked, finding none.

“Yeah,” said Bass, before opening up a folder she was carrying that held the promotion certificate. “You are our newest BTZ Senior Airman.”

In the Air Force, BTZ stands for below-the-zone, an early promotion program where an airman first class like Jenkins can be promoted to the E-4 rank of senior airman six months earlier than they normally might have been. Airmen generally have to be studs at what they do to make BTZ, so the promotion is an official acknowledgement of that skill.

“It gives leaders an opportunity to recognize those airmen who go above and beyond,” said Command Chief Master Sgt. Trae King in a 2014 statement. “When you make BTZ, you’re almost a noncommissioned officer so there are more responsibilities and opportunities available.”

The significance of the promotion was apparent on Jenkins’ face on Tuesday. The airman teared up as Bass ripped off her old two-stripe airman first class rank patch and applied her new three-stripe senior airman patch.

“Listen, all that hard work, everything that you go through, is all about today,” Bass said with a hug. “Keep a good tribe around you and make us proud.”

Being the top enlisted leader in the Air Force, Bass has performed similar ceremonies for many airmen over her career. But it never gets old.

“Teammates – this is one of the best parts of my job, hands down,” she wrote on Facebook.

“She’ll remember that promotion forever,” wrote one commenter. “How amazing!”

It’s a sweet video, in part because of its many features that show how different today’s Air Force is from the service that existed just last year.

Most notably, Bass is the first female senior enlisted service member of any U.S. military branch, and several changes to make the Air Force more welcoming to women have occurred under her watch. You can see one right in the video, where Senior Airman Jenkins is sporting a braid beneath her black security forces beret (Air Force security forces are the equivalent of military police in other branches).

Jenkins would not have been allowed to wear a braid until Air Force grooming regulations were changed in January to allow braids, ponytails and bangs. Women across the service celebrated the change, especially because the tightly-pulled bun that they had to wear beforehand often caused migraine and irreversible hair loss.

“She went to town to allow us to wear it down! Yes!!!!” one airman on Facebook said about Bass in response to the change in regulations.

Bass has also been scrutinized online, particularly on Facebook, where flash storms of comment wars erupted over her unknowingly highlighting intermarital problems between an Air Force couple in January and roasting an airman on Facebook for making fun of her last name in October. But those comment storms have not discouraged her from continuing to be active on social media, as was evident on Tuesday.

“Of course it was presented to a woman by a woman and was recorded,” said one commenter. “That’s the PC Air Force.”