A top-level Pentagon official has accused a senior mortuary employee at Dover Air Force Base in Delaware of twice offering... 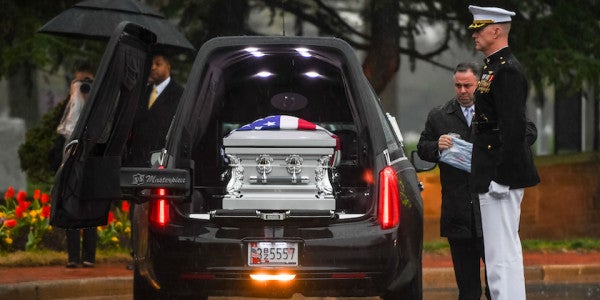 A top-level Pentagon official has accused a senior mortuary employee at Dover Air Force Base in Delaware of twice offering a group of inspectors a peek at the dead body of famed astronaut and Marine Corps aviator John Glenn as the American hero awaited burial earlier this year, according to a memo obtained by Military Times.

The memo was written by Deborah Skillman, the DoD’s director of casualty and mortuary affairs, who was among the inspectors at Dover both times the alleged misconduct occurred. Dated May 11, the document states that, on February 28 and March 2, mortuary branch chief William Zwicharowski offered Skillman and her colleagues a chance to “view the deceased.”

“Moreover,” Skillman wrote, “this offer to view the remains was also made in the presence of, and observed by, junior personnel on the Dover Mortuary Branch staff.”

Ironically, Zwicharowski, a former Marine himself, was awarded the Public Servant of the Year in 2013 after he and two other mortuary employees circumvented their chain of command to expose the Dover mortuary mishandling of the remains of service members killed in Iraq and Afghanistan.

“I want to guarantee the families of our fallen, in the past and in the future, that they’re treated with honor dignity and respect here at Dover,” Zwicharowski told a reporter in 2013. “As long as I’m here, they’ll be treated that way.”

Skillman wrote that Zwicharowski made comments suggesting he thought that the inspection was being conducted in reprisal for his involvement in the whistleblower scandal. However, Skillman insisted that wasn’t the case, writing, “it is important to note that this inspection was pursuant to a new DoD inspection policy, and three other sites had been inspected prior to the team’s inspection of Dover.”

In her memo, Skillman alleged that Zwicharowski had been “counseled by his chain of command the regarding the inappropriate nature” of his first offer, but then repeated it.

Officials told Military Times that the inspectors declined Zwicharowski’s offer and “at no time viewed the remains.

Glenn, a combat-decorated Marine and the first American to orbit Earth, died on December 8, and was buried with full military honors at Arlington National Cemetery several months later on April 6, his wedding anniversary.

The U.S. Air Force assumed responsibility for safeguarding Glenn’s body in the interim at the request of his family to “ensure an increased level of privacy and security for a renowned public servant, Marine Corps officer, and pioneer of space exploration,” according to Skillman’s memo.

“At the conclusion of the investigation, the Air Force will determine what further corrective actions, if any, may be necessary and appropriate,” Ryder told Military Times. “If any allegations of misconduct are substantiated, those involved will be held accountable.”

Ryder also noted that, despite Zwicharowski’s breach of protocol, the Dover mortuary passed its inspection with a score of 94 percent.