Buried in the Department of Defense’s fiscal year 2018 budget request released in May was deadly surprise for U.S. troops... 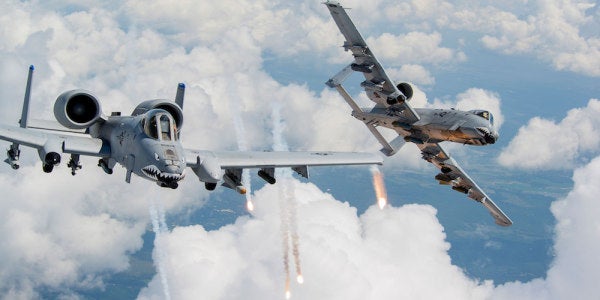 Buried in the Department of Defense’s fiscal year 2018 budget request released in May was deadly surprise for U.S. troops downrange: After years of debate, the Air Force called on Congress to “fully fund the entire fleet” of 283 A-10 Thunderbolt IIs, including $17.5 million in investment funding to help modernize the Air Force’s squadrons of the beloved Warthog attack aircraft.

But the future of everyone’s favorite close air support craft isn’t as set as it may seem.

During a House Armed Service Committee hearing on combat air modernization programs on June 7, Air Force R&D; Chief Lt. General Arnold Bunch testified that the service “is committed to maintaining a minimum of six A-10 combat squadrons flying and contributing to the fight through 2030 additional A-10 force structure is contingent on future budget levels and force structure requirements.”

No bored civilian watching C-SPAN would’ve noticed Bunch’s slip, but luckily Republican Rep. Martha McSally did. The Arizona congresswoman and first female Air Force fighter pilot flew the A-10 herself in Iraq and Afghanistan and has fought to stave off the fleet’s retirement for years. (In April, McSally claimed that she described the A-10 to President Trump as “a badass airplane with a big gun on it.”)

“It's the first time you've publicly said that you are going to go down to six squadrons,” McSally told her fellow HASC lawmakers, pushing Bunch to clarify exactly how many of the 283 Warthogs would see combat in the coming years. “I'd really like to know what those planning assumptions are of the six squadrons.”

It’s a much-needed question from a woman who has first-hand experience with both the awesome power of the A-10 and the political gymnastics of the clods in Congress. The A-10’s future status has vacillated wildly in recent years not just over the aircraft’s long-term combat effectiveness, but thanks to the defense spending cuts that came out of the debt-ceiling crisis of 2011.

Unfortunately, McSally never got an answer because the hearing was coming to an end; however, she posed her questions under the terms that the Air Force would submit written a response on the record.

Bunch and McSally’s did not immediately respond to request for comment from Task & Purpose, but this likely won’t be the last conversation lawmakers have about the future of the A-10 — and hopefully the beloved Warthog will live to brrrt! another day.