They will, however, give you cash. 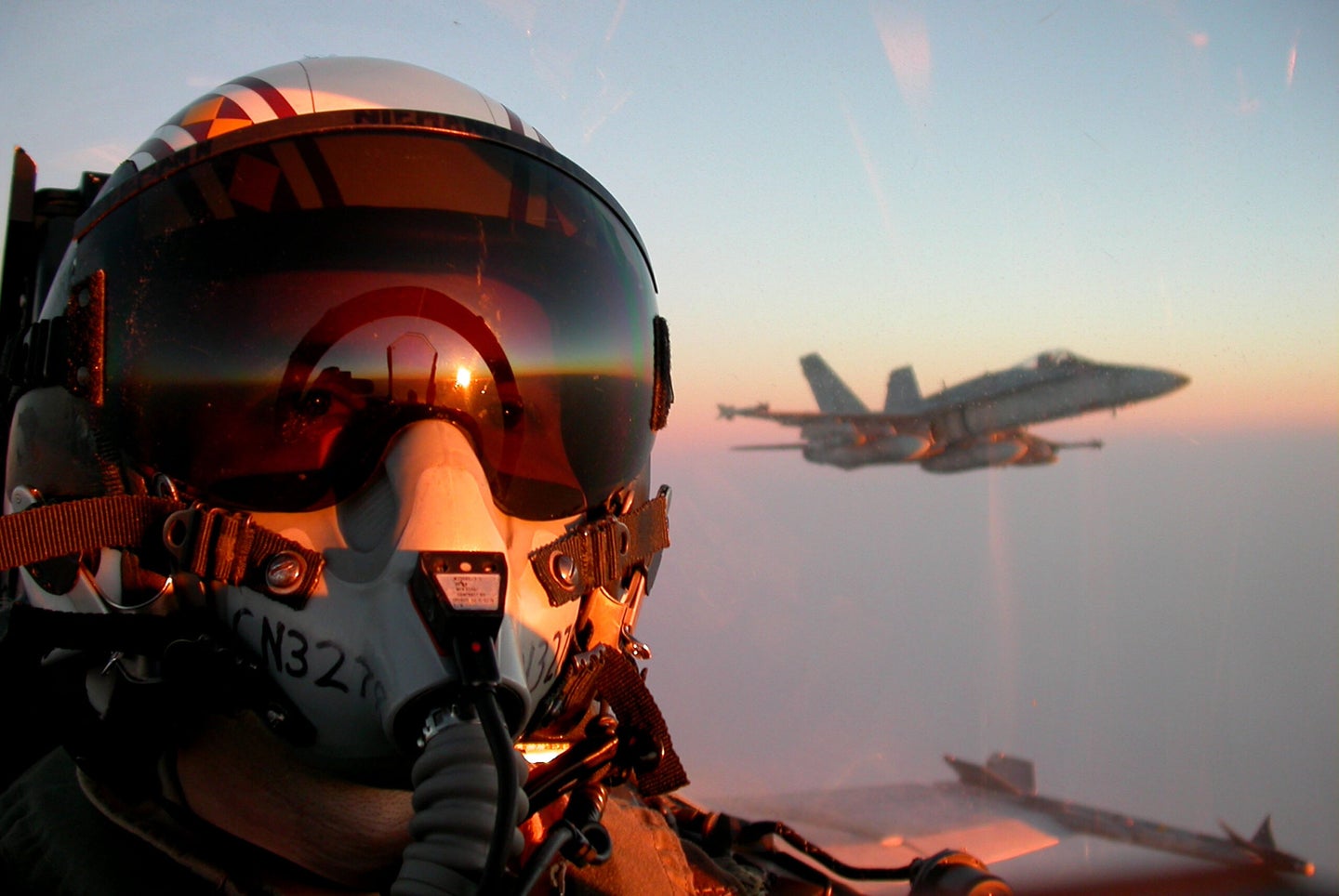 IN FLIGHT - MARCH 27: U.S. Marine Captain Christopher Niemann of the VMFA-323 "Death Rattlers" squadron flies his F/A-18 Hornet over Kuwait March 27, 2003 as he returns to the USS Constellation from a mission over Baghdad. War planes from the Constellation continue to carry out bombing missions in support Operation Iraqi Freedom. (Photo by Christopher Niemann/USMC/Getty Images).
SHARE

The Marine Corps is willing to give Marines thousands in cash to incentivize them to stay in for a few more years, but backseat rides in fighter jets are sadly out of the question.

Marines browsing Instagram in the past week or so may have noticed a post from @dd214memes, a Marine-centric account with nearly 30,000 followers, suggesting that a ride in the backseat of a F/A-18 Hornet was a possibility for Marines on their first enlistment. The post ended up being re-shared by the larger account @notinregz, and showed a purported text message saying that an unnamed commanding officer had offered “a back seat ride” in a Hornet for Marines who were “on the fence” about reenlisting in the Corps.

“Good evening gentlemen: because Marines rate!” the supposed text message read. “The CO has offered up a back seat ride on an F18 flight for any FTAP Marine that is on the fence on deciding on reenlistment. With the honor code, that the Marine will reenlist with the flight as the pre-incentive. Can you please ask ur Marines if they would be willing to reenlist for an F18 back seat ride?”

The nation’s first all-weather fighter and attack aircraft, the F/A-18 has been in service with the Marine Corps since 1983. The twin-engine aircraft can fly as high as 50,000 feet and reach a speed of Mach 1.7+ (about 1,300 mph). But securing a backseat ride in a Hornet is far more difficult than military meme pages suggest.

“We are unable to verify the veracity of the referenced post,” said Capt. Ryan Bruce, a Marine Corps spokesman, when asked about the Instagram posts. “The closest official terminology we have for a ‘backseat ride’ is an Orientation and Indoctrination Flight.”

An orientation and indoctrination flight introduces nonpilots to a particular aircraft’s capabilities. For example, Lt. Gen. Duane Thiessen and Maj. Gen. Thomas Conant flew on orientation and indoctrination flights in November 2011 so they could learn about the aircraft’s capabilities and how to use them effectively. Indeed, Marine Corps Aviation’s template for requesting these types of flights assumes that the backseat rider will have stars on their collar: “General Marine is the deputy commander and senior Marine in a key position to influence MV-22 operations in Japan … this flight will give him a broader understanding of the opportunities and challenges of operating the MV-22 in Okinawa and mainland Japan.”

In other words, the Marines are not interested in putting lance corporals in a supersonic multirole fighter and making them pull barrel rolls before signing on the dotted line again. “All requests for orientation and indoctrination flights in tactical aircraft are ultimately approved by the Deputy Commandant for Aviation,” said Bruce. “Historically, they have not been approved as an incentive for re-enlistment.”

Still, the Corps is offering reenlisting Marines something tangible in exchange for a few more years of service: Money. The service has a number of incentives for Marines to stay in particular specialties, including $50,000 for qualified aircraft maintainers and nearly $40,000 for experienced infantry squad leaders. But the Marine Corps may want to consider fighter jet rides in the future since they seem to be very effective retention tools.

“Let me fly an F-22 for an hour and I’ll sign my life away,” noted one popular comment.