The Marine Corps Uniform Board Just Unveiled A Few Changes

Tired of donning a duty belt and cammie blouse only to have the bottom half of the shirt puff out... 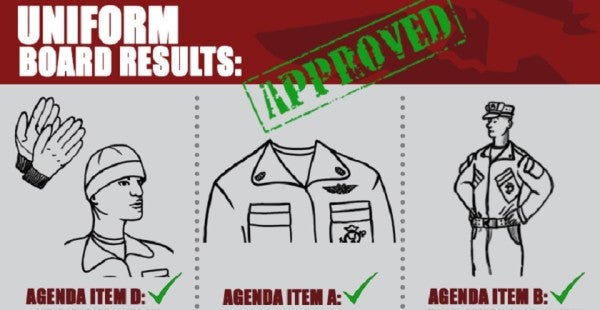 Tired of donning a duty belt and cammie blouse only to have the bottom half of the shirt puff out like a MARPAT mini-skirt as you patrol the barracks? Well, you’re in luck: The results of the Marine Corps’s latest uniform board review are here, and now you can tuck in that blouse (sometimes), hold on to your issued gloves and beanie, and if you spend the workday behind a console controlling a UAV — you can let everyone know with a new badge.

Devil dogs are now authorized to tuck in their Marine Corps Combat Utility Uniform blouses under certain conditions, according to to the results of a recent Marine Corps uniform board, published on Nov. 27. Commanders are now authorized to “direct the MCCUU blouse be tucked into the MCCUU trousers in a neat manner, when doing so will enable Marines to deploy and employ mission critical equipment” — like, say, a duty belt, or pistol belt.

“As for the tucked-in blouse decision, the Flame Resistant Organizational Gear (FROG) uniform was designed to have the blouse tucked in for a flame/fire threat environment,” Capt Christopher Harrison, a Marine Corps spokesman, told Task & Purpose. “The Marine Corps Combat Utility Uniform (MCCUU) blouse was not authorized for such wear until the release of this uniform board.”

The wording of the Corps announcement makes it pretty clear that you can only get away with tucking in your blouse under those conditions if, and only if, the unit commander deems it appropriate. That said, Marines on the range or deployed overseas have been tucking in their tops for years, so this feels like less of a new rule and more of along the lines of: The commandant just approved this because we all know you’re gonna do it anyway.

In addition to tucked-in cammies, enlisted and officer unmanned aircraft system operators will be getting a new breast insignia they can rock on their uniforms. Details on the badge, its placement, and arrival date, will be provided in a separate update, as the design is still under review. A Marine Corps official did confirm to Task & Purpose that of the proposed badges, one looks similar to the UAS insignia of other services, but with the gold flight wings of Marine aviators.

But wait, there’s more! If you’re getting close to getting out or transferring to a new duty station and are dreading the prospect of cleaning your soiled beanie and gloves — you don’t have to now! Those moondust-covered gloves and dandruff-filled caps are now “personally owned and maintained items, vice organizationally issued items,” the statement notes — just like your olive-green seabag. Because everybody wants a beanie that’s so caked in sweat and dirt it can hold it’s shape when you take it off.

Finally, the update contains additional guidance on the position and placement of rank for company grade officers up to full bird colonels, which amounts to: Get rank, grab a protractor, and try to remember the difference between “perpendicular” and “parallel.”

Unsurprisingly, the rank guidance was restricted to butter bars on to full-bird colonels and warrant officers. I’ll go out on a limb and say this was intentional: Even if you wanted to issue new rank guidance to general officers, who other than a general would even know those orders, or have enough clout, and guts, to correct a misplaced star on that constellation of a collar?

UPDATE: This article was updated after publication with additional information from Headquarters Marine Corps. (11/30/17; 2:20 p.m. EST)

CORRECTION: An earlier version of this article incorrectly stated that Warrant Officers were not issued new guidance on rank placement. (12/1/2017; 8:53 a.m. EST)