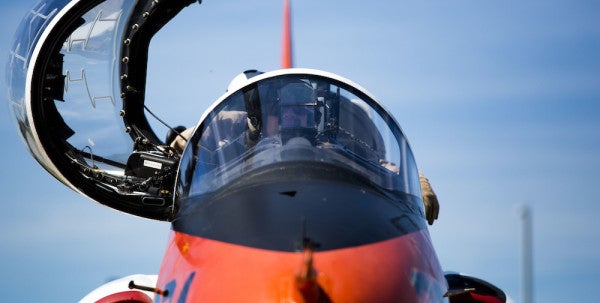 The cause is being investigated, but the incident raises questions about the T-45’s recent history with hypoxia: a “physiological episode” (as the Navy calls it) triggered by a deficiency in the amount of oxygen delivered to a person’s cells. In some cases, it can be deadly.

Last April, more than 100 naval instructor pilots essentially went on strike rather than fly their T-45 Goshawk planes after a string of scary oxygen-related in-flight incidents. Similar hypoxia problems have plagued the service’s F/A-18 Super Hornet and E/A-18 Growler platforms and have been cited in four pilot deaths in the past decade. (The Air Force’s F-35 and F-22 fighters have also struggled recently with critical oxygen-supply issues.)

A June 15 Navy report evaluating hypoxia claims in the T-45 and F-18 conceded that “finding a solution to the U.S. Navy and U.S. Marine Corps’ high performance jet aircraft challenge has proved elusive,” but added that “the number and severity” of those incidents “can and must be dramatically reduced with a unified, systematic approach.”

The next month, the Navy announced that the T-45 would return to the skies after an “air supply fix” and the addition of an oxygen monitoring system. That fix, according to Navy spokesperson Lt. Cdr. Leslie Hubbell, would eliminate moisture from the aircraft’s on-board oxygen generation systems — a component previously missing from the T-45.

In addition, the Navy installed CRU-123 monitoring systems to track oxygen levels and alert pilots if they changed.

By this month, 113 of the Navy’s 170 T-45s were equipped with the CRU-123, spokesperson Lt. Elizabeth Feaster told WBIR, a Tennessee local NBC affiliate.

The Tennessee crash remains under investigation; follow Task & Purpose for updates as the story develops.