Since last week, more than 100 instructor pilots in multiple squadrons throughout the Navy’s aviation pipeline have refused to fly... 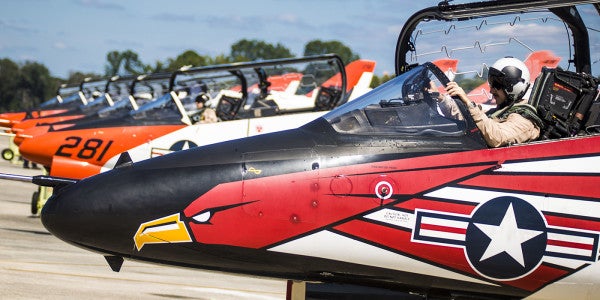 Since last week, more than 100 instructor pilots in multiple squadrons throughout the Navy’s aviation pipeline have refused to fly their T-45 trainer jets until the service addresses rampant problems with the aircraft’s life-support system that can cause oxygen poisoning, Fox News reports.

“It’s the admirals… the people that have the power to fix it that aren’t doing a damn thing,” one instructor pilot told the network.

Hundreds of student naval aviators from the Navy, Marine Corps, and Coast Guard — including 1st Lt. Michael Pence, the son of Vice President Mike Pence — have had training flights scrubbed as a result of the instructors’ strike at the Navy’s T-45 Goshawk squadrons, based in Meridian, Mississippi; Kingsville, Texas; and Pensacola, Florida.

A Navy representative told Fox News that “40 percent of instructor pilots refused to fly their training flights Friday,” but “a flight instructor said the number was closer to 75 percent, because the Navy reduced the flight schedule knowing more than half the pilots would refuse to fly.”

At issue is a series of incidents in which Goshawk pilots experienced a special form of hypoxia, in which the blood can’t get enough oxygen. That can result in disorientation, incapacitation and death. Such incidents have quadrupled in the last five years, according to Fox News:

Last week, a student from training squadron VT-86 in Pensacola, Fla., had to be “dragged out” of his jet because he became “incapacitated” from the faulty oxygen system, according to two flight instructors.

In March, a British exchange instructor pilot with thousands of hours in the cockpit had to conduct an emergency landing during a training flight near Meridian, Miss., after both he and his student experienced hypoxic symptoms.

In August, a flight instructor and his student were forced to eject near Kingsville, Texas, when they felt symptoms of hypoxia, crashing the multi-million dollar jet. Both pilots ejected safely and were not seriously injured.

To its credit, striking pilots say, the Navy has been generally sympathetic to their cause, with most commanders “telling their instructors to follow their instincts — and not forcing them to fly,” Fox News reports.

Nevertheless, politicians want a fix, fast — “There are problems that are being covered up,” Republican Rep. Mac Thornberry of Texas, the House Armed Services Committee chairman, told Fox News — and Navy and civilian researchers haven’t yet figured out how to stop the problems. “We have been working this for five, six years now to try to get to the bottom of this,” a Navy official told Fox News.

Meanwhile, similar oxygen-deprivation “physiological episodes” have also exploded in pilots of the Navy’s keystone fighter aircraft, the F-18 Super Hornet. In congressional hearings last week, Navy officials revealed that the Hornet and its electronic-warfare counterpart, the EA-18G Growler, had had nearly 400 critical incidents in recent years, most involving oxygen contamination or cabin-pressure problems.

The Air Force’s newest air-superiority fighter, the F-22 Raptor, has experienced similar problems for years, grounding the entire fleet for five months and being blamed in at least one pilot’s death.

Hopefully, the U.S. won't end up in any (more) wars soon — at least not until the Pentagon develops a fix, or fighter pilots who don't breathe oxygen.