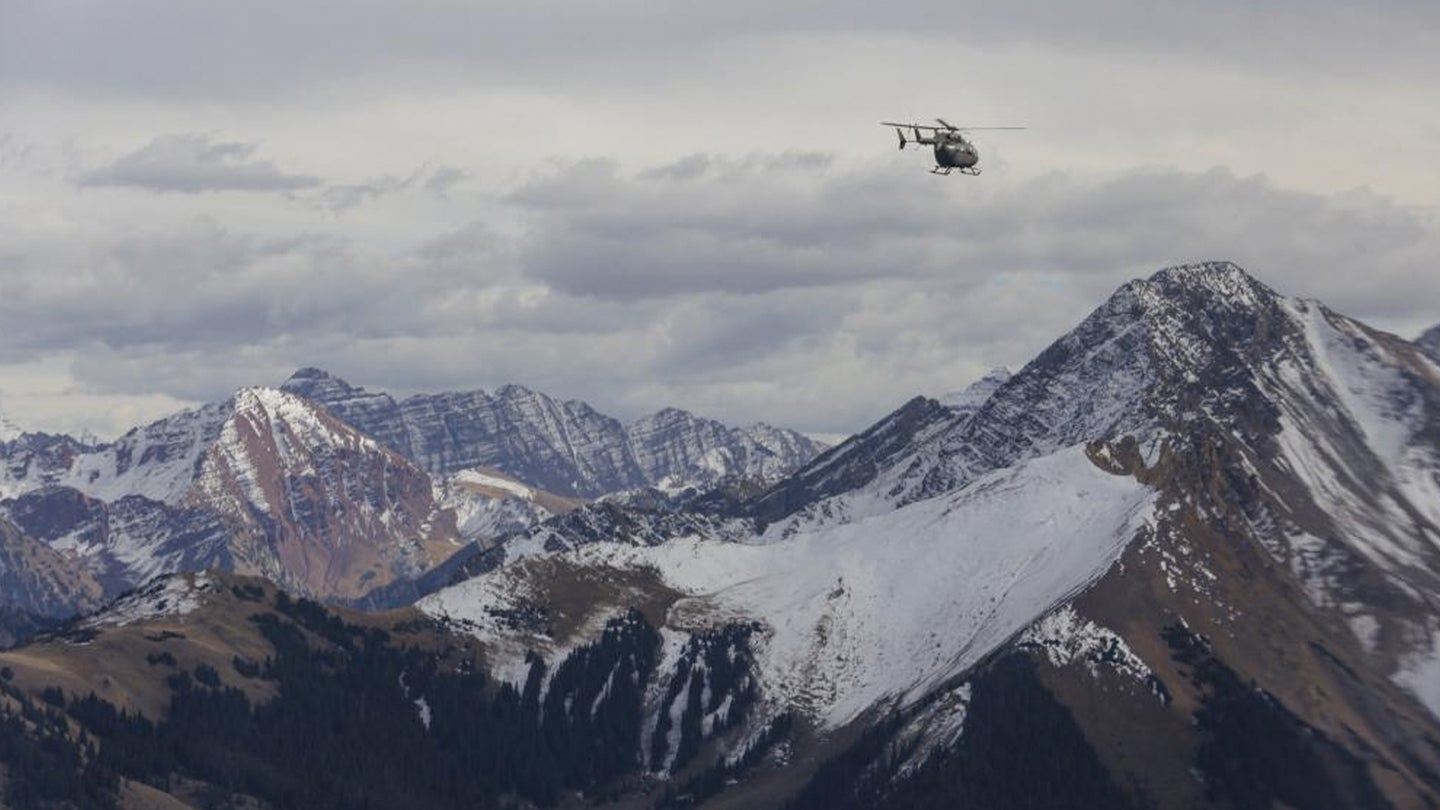 At one point or another, fans of military aviation will eventually encounter a nail-biting image of a U.S. military helicopter flying through a craggy mountain range, approaching the edge of a cliff or a knife-edge ridge and somehow landing one or two wheels on it to pick up or drop off passengers before taking off again into the chasm between peaks.

There are three good reasons why the U.S. military is able to safely execute such dicey-looking operations: training, training, and more training. But not all of the continental United States is covered in mountains, so where does that training occur? In Eagle County, Colorado, home of the Colorado National Guard’s High-Altitude Army National Guard Aviation Training Site, also called HAATS.

The huge peaks and varied terrain of the Rocky Mountains surrounding HAATS make for a perfect place for U.S. and international helicopter pilots to not only practice the art of high-altitude mountain flight but also perform it in real-world missions to rescue stranded or injured hikers.

“Welcome to HAATS,” reads a sign at the school, according to a National Guard press release written about the facility on Tuesday. “Lives saved this year: 16. Lives saved since 1986: 510.”

At high altitudes, there is not much air to feed a helicopter’s turbine engines, which means the aircraft’s performance takes a hit. It also means rotor blades have less air to bite into, so they cannot generate as much lift as they can at lower altitudes. The windy conditions found in mountainous terrain also make it more difficult to hold the aircraft steady.

“All landings in high altitudes are challenging all the time,” Chief Warrant Officer 3 Charlie Mock, a Black Hawk pilot from the 25th Combat Aviation Brigade, said in 2012. “Throw a gust of wind in during a one or two-wheeled landing at 8,000 feet and things tend to become complicated.”

When it comes to helicopters, it’s always a question of power, and those questions become more difficult to answer at higher altitudes where it takes more power to stay aloft.

The art and science of managing power is the essence of the week-long HAATS course, which starts off with one day in the classroom to learn “the intricacies of power management in high-altitude mountainous terrain,” according to the press release. The other four days are spent flying through the mountains, “with altitudes ranging from the airport at 6,500 feet to peaks of 14,000 feet,” which is equal to about 2.7 miles straight up. It’s not quite as high as Mt. Everest, which is 29,000 feet tall, but it’s well above the 8,000-foot mark, which is where many people start to feel the effects of altitude sickness.

“They teach hoist operations, how to land in small areas, how to operate at altitude, and how to take advantage of the winds and terrain to get more performance out of your helicopter than you might normally be able to,” said Army Gen. Daniel Hokanson, the chief of the National Guard Bureau and the Army Guard’s senior aviator, in the press release.

Hokanson visited the school recently and shared his own experience flying rescue missions with the Oregon National Guard.

“It’s all about your ability to manage the power to do the mission, and during a rescue, to keep the aircraft stable,” he said in the press release. “But if you don’t have the basic skills to adjust to the environment, you’re not going to be successful. The key is to train pilots in the most difficult surroundings that we can find.”

“Due to a combination of these environmental factors, helicopters are going to be very limited up here, from a power perspective,” he said in the press release. “Therefore, the skill and forethought that goes into forming approaches take practice that you can’t necessarily replicate elsewhere.”

HAATS is not the only place where military helicopter aviators learn how to operate in the mountains. Another Oregon Army National Guard pilot, Chief Warrant Officer 3 Michael Newgard, attended the Marine Corps Mountain Warfare training site near Bridgeport, California, but he told Task & Purpose that other senior aviators in his unit had gone to HAATS. In particular, Newgard noticed that the aviators who he sees attend HAATS are instructor pilots, who can then spread their knowledge to other pilots back home.

“They’re excellent schools that teach and preach power management,” said Newgard, who performed a hairy mountain landing of his own while rescuing an injured hiker on a snowy ridge on the slopes of Mt. Hood, Oregon in July.

“The training really pays off safety-wise for our folks in Oregon, given that we have five 10,000-foot peaks in Oregon in addition to a lot of other mountain ranges that we perform civilian rescues on regularly,” he said.

The schools also offer advanced training on how pilots can manage the aircraft’s weight, balance, and mountain wind pattern, Newgard explained. But the most important part is learning how to think on your feet.

“The greatest lessons are how to recover the aircraft when an emergency develops due to environmental factors,” he said, pointing out that many active duty pilots who deployed to Afghanistan were also trained at HAATS. “Learning how to avoid getting in trouble at high altitudes is incredibly valuable.”

That lesson is so valuable that Army pilots are not the only ones who train at HAATS. Though Air Force Lt. Col. Brough McDonald has never attended the school, but most of his crews have, and after hearing their feedback and observing their performance in high altitude he has concluded that HAATS “is invaluable to the vertical lift community,” he told Task & Purpose.

Mountainous, high-altitude environments represent the limit of some aircraft’s performance, McDonald explained, which is where the skills and principles taught at HAATS make all the difference. Those skills include learning how to assess the changing winds and environmental conditions; reading the topography to deliberately choose an approach path and escape route; and “instill the patience in the crews to get the assessment right before committing to the zone,” he said.

McDonald pointed out that the Air Force values HAATS so much it has an HH-60 helicopter pilot and an enlisted special mission aviator permanently assigned there as instructors.

Besides the high altitude and difficult terrain, there is one more element at HAATS that makes it an ideal school: real-world practice. Near the school stands Capitol Peak, one of 58 summits in Colorado taller than 14,000 feet, known collectively as “fourteeners.” The fourteeners attract hikers statewide, but Capitol Peak is among the most difficult, in particular, because of its Knife Edge, a short ridge with steep slopes on either side. The peak and other stretches of rough terrain nearby leave some hikers injured or stranded in areas where only a helicopter can rescue them, the press release explained.

The Colorado National Guard works with state and local authorities and civilian first responders to source out search and rescue operations. Army Chief Warrant Officer 5 Pat Gates has participated in a dozen or more rescue missions, several of which took place near or on Capitol Peak.

“You’re identifying the landing zone, looking at power requirements, monitoring winds and fuel levels,” he said in the press release. “You’re looking at routes in and out and making decisions in high-pressure situations. That’s also the mindset we try to teach our students.”

All of this seems to validate a quote McDonald mentioned, which is often attributed to helicopter pioneer Igor Sikorsky: “If you are in trouble anywhere in the world, an airplane can fly over and drop flowers, but a helicopter can land and save your life.”

But the helicopter needs a trained pilot to do so safely, and hats off to HAATS for churning out people who are ready to take on the challenge.