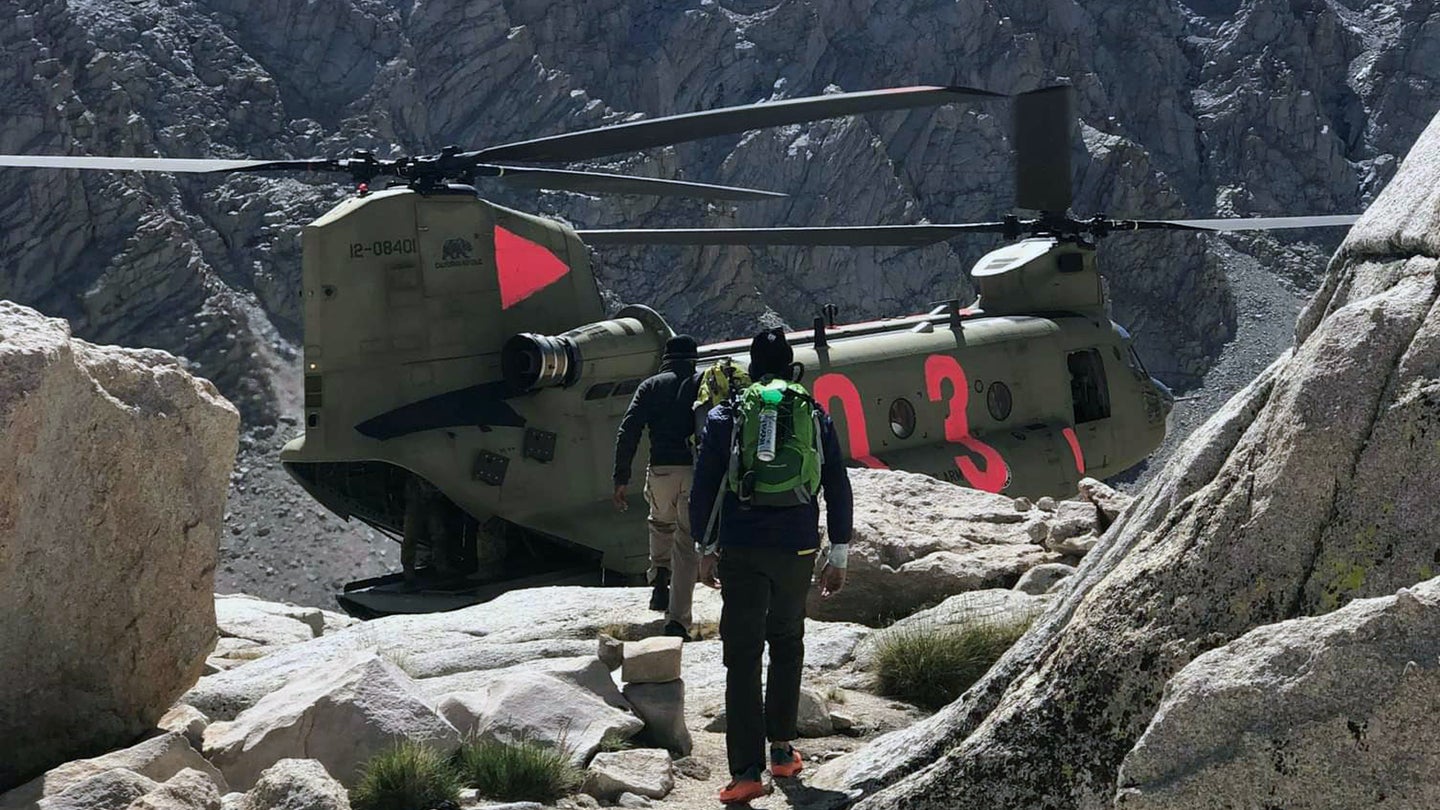 The five crew members from the California Army National Guard conducted the rescue mission on July 29 in support of the Inyo County Sheriff’s Office, according to a California National Guard press release. Because of the clouds surrounding the mountain, the crew had to readjust how they were flying in to pick up the hikers, who’d been stranded overnight in the cold with “limited supplies.”

The high altitude of the flight “required supplemental oxygen for the crew,” the release said. They found the hikers near Mt. Whitney’s 14,505-foot summit.

“The people we were looking for were ambulatory, not very well, but other hikers were helping them,” Army Chief Warrant Officer 3 Aaron Mello said in the release, adding that they “hovered around a little bit” because they couldn’t see a flat area to land their aircraft. “It was real rocky, real steep and uneven.”

The crew determined there were two options: dropping off a search and rescue team to get the hikers to a landing zone down the mountain, where they’d be able to land the helicopter easier, or “perform a riskier two-wheeled landing” to get the hikers on board quickly.

They agreed on the latter.

The crew prepared to perform a “pinnacle landing,” which is when the Chinook balances on its back two wheels and the crew drops its ramp to have people climb aboard. Mello said they practice the move often for real-world scenarios just like this.

Mello said the crew worked together for a few minutes “to even find a spot where we could safely get both wheels on the ground without a rock punching a hole in the aircraft or popping a tire.” He couldn’t see what he was landing the two back wheels on and was depending entirely on the instruction from the flight engineer and two crew chiefs who were coaching him and the other pilot, Chief Warrant Officer 3 Craig Hannon.

“They’re my eyes in the back,” Mello said. “You have to trust them completely.”

The first attempt didn’t go so smoothly. According to the release, as the wheels lowered onto a “slightly sloped rock,” the helicopter “started to roll,” forcing the crew to call the maneuver off. One of the two crew chiefs, Sgt. Kyle Reeves, saw a flatter rock roughly 25 feet away; he “hung out of the cabin door” and worked to help Mello guide the helicopter onto the rock.

“From the pilot’s perspective, he’s backing up blind,” Reeves said. “There is no backup camera or anything. We are the backup camera.”

Ultimately, Reeves was able to help Mello touch down one of the Chinook’s tires “into a stone indentation roughly the size of the basketball.” The crew put the ramp down while Mello and Hannon kept the Chinook flying on the front half and worked to keep the helicopter “perfectly stable” as the crew worked to get the hikers on board.

It was a race against the clock — Mello likened the balancing act to “riding a unicycle and trying to juggle.” Staff Sgt. George Esquivel, the flight engineer, added that the second they landed, “we had very limited time.”

“Our pilot on the controls was fighting all the terrain, the wind, and rotor wash,” he said. “We wanted to make sure he was comfortable the whole time during that situation, so we just sped up the process as much as we could.”

Esquivel said they “kind of rushed” the hikers onto the aircraft, knowing how delicate the situation was. While the hikers “looked very tired and withered,” according to Esquivel, they were able to move without limping. With everyone back on board, Mello and Hannon flew them to Bishop Airport in the Owens Valley.

“It feels great to rescue people who are alive,” Mello said.

Lucky for us, there’s video of the Chinook’s landing that you absolutely have to see. You’ll need to disable ad-blocking to view the video below: