13 essential pieces of gear for the War on Christmas

The war for the soul of America is upon us. Dress accordingly. 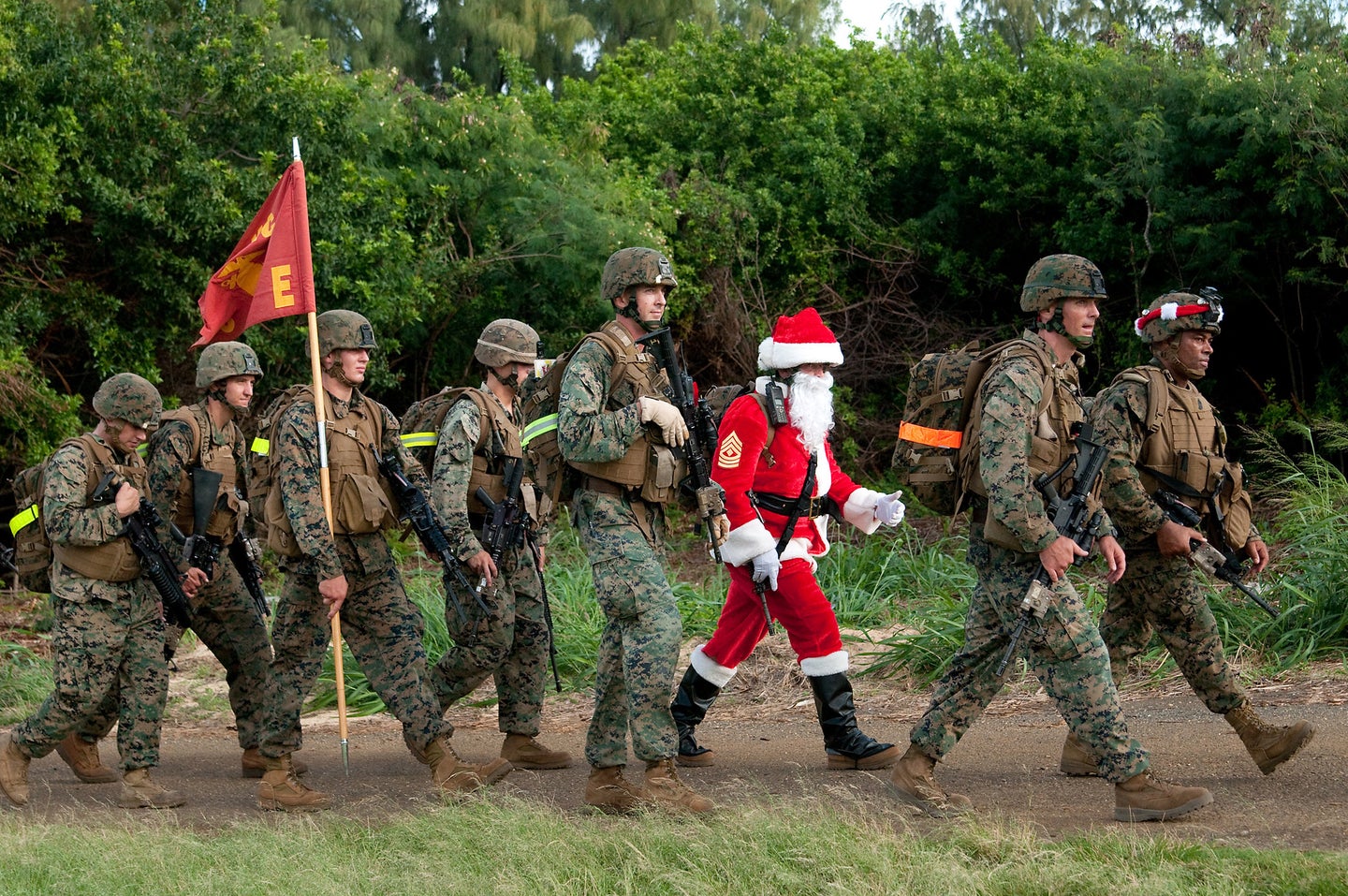 Ah, the War on Christmas, an American tradition as beloved and time-honored baseball, apple pie, and arguing over whether Die Hard is in fact a holiday film.

While the original campaign to ban Christmas traces its roots to the asshole Massachusetts Puritans of the mid-17th century, the modern freakout over the supposed campaign against yuletide cheer has little to do with the contents of the Bible and more over whether we’re forced to greet each other with “happy holidays” or not. Indeed, the War on Christmas isn’t truly a war, but a border skirmish in our broader cultural conflict over whether America is a righteous Christian nation or not, with an insurgency waged over the airwaves from Fox News and its ilk to reinstate Santa at the center of every piddling American holiday tradition. It is, like lukewarm eggnog and itchy sweaters, the most tired, hackneyed, exhausting annual squabble wedged between Thanksgiving dinner table politics and New Year’s Eve over-anticipation. Even Pope Francis thinks the War on Christmas bullshit.

I, for one, demand some sort of ceasefire, at least for a fictional game of soccer in some godforsaken suburban No-Man’s Land somewhere, but in the meantime, Santa better stay strapped. Here is the Task & Purpose guide to staying kitted out this holiday season and defending yourself against hordes of godforsaken heathens on a crazed quest to suck all holiday cheer out of the world. Go forth, and stay vigilant: who knows what lurks behind each snowy vignette this holiday season.

Did you Army? Do you Army? Have you thought about Armying? Finally, there’s a piece of apparel (outside of a gray T-shirt) with your name on it. This remarkably warm and hilariously on point holiday sweatshirt also doubles as a thoughtful gift for the soldier in your life who doesn’t already have a bad haircut and an ASVAB waiver to point to as proof of their service to America’s Army. Hooah!

Eighty rounds. Fifteen meters in range. Two firing modes. A hybrid scope. Slam these things together and you absolutely get a Nerf-style version of the legendary Ma Deuce .50 caliber machine gun, ready and willing to provide suppressive fire during your next engagement with the heathens next door. Just don’t forget to do your best Audie Murphy impression the next time you find yourself surrounded.

For fun! And intimidation!

Facing down atheists and Antifa is thirsty work, so why not lug around a ton of beer in your own personal GrowlerWerks 64oz personal keg? Nothing says “I love Jesus Christ” like blowing a .389 while yelling at neighborhood kids to get off your lawn.

Just in case you’re not a beer man, this American flag-themed flask from Home Aggressive offers an extra level of protection for that sweet, sweet booze with several layers of stainless steel and leather.

Why settle for a furtive gulp of hooch from a discreet flask when you can whip up a delicious cocktail with some class and style? Enter the Mixology & Craft bar set, a slick bartender kit bag that will have you pounding potent potables like Ernest Shackleton in no time at all. Best of all, this bar kit is totally mobile and ready for the road ahead: for what you’d spend on a nice bottle of single-malt, you can equip yourself to be a bartender without borders.

You want your friends and Santa to know you’re no punk civilian, even if you did get out after one enlistment seventeen years ago, andthis tactical stocking shows everyone who they’re dealing with. It comes complete with MOLLE straps, extra tough tactical zippers, Velcro hook and loop fasteners, and a big, tan plastic clip! Not just tan…Coyote Tan!

If your everyday carry loadout doesn’t include some sort of handy pocket knife for utility and self-defense, you’re doing something wrong — and this especially applies during the holidays, when the process of shopping and gift-giving devolves into absolute anarchy at the local Wal-Mart. Cut boxes! Slice wrapping paper! Threaten other shoppers! For the purposes of this list, we’ll go with one of out best pocket knives of the year and suggest the Benchmade Bugout — you know, just in case.

Finally, a survival kit designed to almost certainly ensure that you’ll die alone in the wilderness somewhere. Tactical pen? Check. Tactical spork? ‘Snowflake’ multitool? Check. Overwhelming sense that you’re compensating for something? Check check check. Look, there are plenty of decent survival kits on the market, so don’t just go all-in on something that screams overkill. Otherwise you might end up a cautionary tale on some SERE school PowerPoint somewhere.

The Casio G-Shock is the workhorse of modern tactical watches. Simple, practical, and ubiquitous, it keeps ticking in a sandstorm or after slogging through mud or water, all qualities that make it a must-have accessory for the modern warfighter alongside the M4 carbine and the reflective belt. Just try to hold onto it long enough when negotiating with the locals as part of your mission to liberate your local godless stronghold on the coasts.

As any veteran of Afghanistan or Iraq will tell you, an active war zone is no excuse for not shitting the right way. Luckily, Squatty Potty’s handy footstool is perfect for helping you boot your own stool from the poorly designed comfort of your porcelain throne.

If you know, you know.

Yes, this is a summer purchase, but you know that the real War on Christmas is fought year-round, in the hearts and minds of children everywhere. Might as well come packing some heavy armor if you’re planning on getting down and dirty on the next big front: summer vacation.