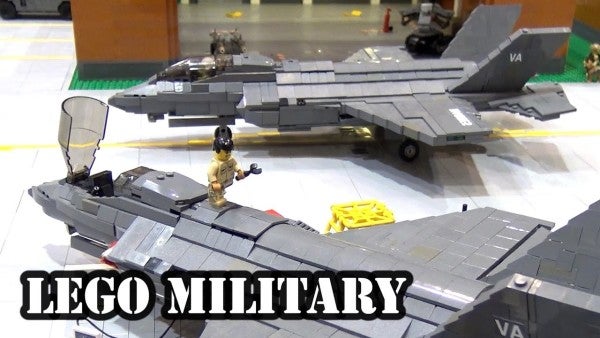 If you’re like me, then you might have memories of walking through toy stores as a kid and going ape shit over those massive box sets of Legos — you know, the ones that cost as much as a car payment and require half a kitchen table to stage — before your parent drags you to the other end of the aisle, and (if you’re lucky) buys you off with the cheapest Lego kit there. Usually Jar Jar Binks or a train conductor, instead of the X-Wing or sci-fi battle tank you really wanted.

Such is life. Legos are designed to drive children into chaotic building frenzies that deplete their parents’ bank accounts.

Then we grow up and forget about those little multicolored cubes, and their sharp corners (unless we step on one of those deadly caltrops). That is, until someone makes this:

Seriously the best thing to ever come out of Twentynine Palms.Beyond the Brick

This 75-square foot Lego Marine Corps Air Station was constructed by Paul Thomas and shown at Bricks by the Bay, an annual exhibition for Lego aficionados and fans in Santa Clara, California. The massive set, which was uploaded to Beyond the Brick and reported on by The Aviationist’s David Cenciotti, was inspired by Marine Corps Air Ground Combat Center Twentynine Palms, California, and is probably the only good thing to have ever come out of one of the Corps’ most reviled duty stations.

Screw it, this thing is never getting off the ground, let’s go grab a beer at the Blockstripes NCO club.Beyond the Brick

The diorama is 10 by 7.5 feet, and includes a small squadron of Lego F-35B Lightning IIs (no word on whether these Lego variants are combat ready); three MV-22 Ospreys; a CH-53E Super Stallion; an attack helicopter that appears to be an AH-1Z Viper based on four rotor blades; and a host of support and logistic vehicles.

And of course, since it’s a Marine Corps Lego base, there are, well, jarheads — or would they be blockheads?

Even Lego Marines routinely show up wearing the wrong uniform of the day.Beyond the Brick

There’s Lego Marines loading into Lego Ospreys, doing repairs on aircraft, and based on that tiny blue portajohn on the set’s edge, drawing Lego dicks with tiny Lego markers. For added realism, the set also includes a Lego Humvee towing a water buffalo, because you know 1st Sgt. Brick gave his Marines a hearty peptalk about passing out during formation that included the words: “Hydrate or die.”

Even in Lego land, duty has no friends.Beyond the Brick

Unfortunately, the diorama doesn’t appear to be for sale, so instead, we here at Task & Purpose strongly encourage any E-3s reading this to save the money they’re about to blow on a new lifted pickup and go broke buying Lego kits instead. (If you do, take some photos and send them our way.)