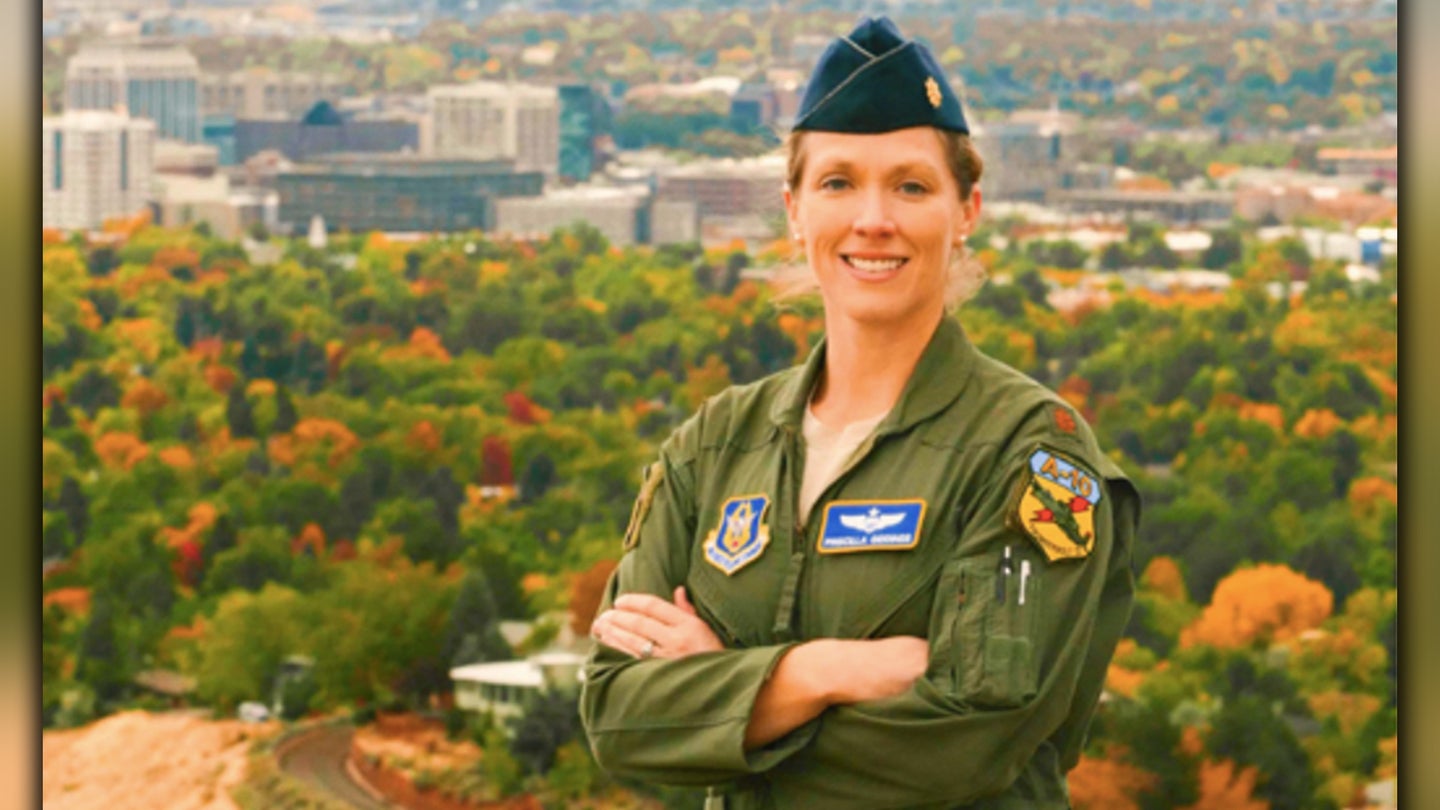 The Air Force promoted a major in the Air Force Reserves who posted the personal information of an alleged sexual assault survivor to social media and to her official newsletter, then denied posting that information before an ethics committee, and was recently censured by the Idaho House of Representatives.

A member of the Idaho House of Representatives, Lt. Col. Priscilla Giddings was still a major this spring when she shared an article from a far-right news outlet listing the name and photo of a 19-year-old legislative intern who had accused former Idaho representative Aaron von Ehlinger of raping her, according to the Idaho Statesman.

During an ethics hearing in April, Giddings initially denied sharing the photo and information, then later said she had not “thoroughly examined” what she had posted. The intern’s photo was in the thumbnail of the article and her name was repeated several times throughout the article, according to Idaho news station KTVB-7.

Giddings’ conduct is commonly referred to as “doxing.” The Department of Homeland Security defines the term as disclosing or posting an individual’s personally identifiable information publicly, “usually for malicious purposes such as public humiliation, stalking, identity theft, or targeting an individual for harassment.” Sexual assault survivors are often doxed as a means of intimidating or silencing them.

Still, the lawmaker pushed back on the ethics committee, denying all of the allegations made against her at a hearing in August.

“These accusations are unfounded, biased attacks driven by partisan political goals,” she said in the hearing, where she was accused of “conduct unbecoming a Representative which is detrimental to the integrity of the House as a legislative body,” according to KTVB-7.

The committee recommended she be censured by the full House, meaning the body would express severe disapproval of Gidding’s actions. The House voted to censure Giddings and remove her from the House Commerce and Human Resources Committee at a hearing on Nov. 15.

“Censoring me for forwarding an already widely-available news article is nothing more than a political ploy,” Giddings said in a statement sent to Task & Purpose. The lawmaker accused Idaho House Speaker Scott Bedke, who is running against Giddings in a race for state lieutenant governor, of using the censure to benefit his own campaign.

“Stopping this kind of unabashed corruption is exactly why I serve in the legislature, and it’s exactly why I’m running for Lt. Governor,” she said.

None of these events seem to have dissuaded the Air Force from promoting Giddings from major to lieutenant colonel on October 14.

“It was great to reaffirm my oath to support and defend the Constitution of the United States,” Giddings wrote on Facebook after her promotion, which was overseen by Air Force Academy superintendent Lt. Gen. Richard Clark. “My daughters were able to pin on my new rank. I hope that is just one of many experiences that will kindle a patriotic spirit within them.”

A 2005 graduate of the Air Force Academy, Giddings flew the A-10 Thunderbolt II attack plane, commanded MC-12 Liberty observation plane flights, and deployed three times in support of Operation Enduring Freedom, according to a profile on the Air Force Reserves website. She is currently assigned to the Air Force Academy as an admissions liaison officer, said Dean Miller, the chief of media relations at the academy. Giddings was elected to the Idaho House of Representatives in 2016.

After the allegations against Giddings first came to light, the Air Force conducted an “assessment” of the officer “and took appropriate action” after it was completed, Miller told Task & Purpose. Ann Stefanek, the chief of media operations for the Department of the Air Force, also said that the service “completed its assessment and appropriate action was taken,” but neither Miller nor Stefanek could provide more specifics, citing privacy laws.

“After an investigation was completed, it was determined that Maj. Giddings was eligible for promotion to Lt Col” based on Air Force regulations for the promotion of reserve officers Miller said.

Gidding’s promotion comes at a pivotal time for the Air Force. The branch, like the rest of the military, is struggling to cut down on rampant sexual assault and harassment within its ranks. In September, the Air Force released a report showing that one out of three military women who responded to a survey said they experienced sexual harassment during their Air Force career, while one out of four female civilians also experienced sexual harassment in the branch. The top Air Force officer, Chief of Staff Gen. Charles “CQ” Brown Jr. emphasized the importance of holding leaders accountable as a means of preventing further harassment.

“This is what goes back to developing those leaders that hold all of our airmen accountable on what we expect in accordance with our core values,” Brown said in July when asked by the Military Officers Association of America about what the branch is doing to reduce sexual assault and harassment. “That, to me, is the most important thing we can do in addition to the programs we lay out.”

Brown also emphasized the importance of treating victims of assault and harassment with respect.

“At the same time, we’ve got to support those that become victims of sexual assault, sexual harassment, or any other interpersonal violence or harassment,” he said.

The Air Force Academy in particular is trying to cut down on sexual assault and harassment on its campus. An inspection of the academy’s Sexual Assault Prevention and Response program from December 2018 to January 2019 found that the program “does not comply with key elements of governing directives,” according to Air Force Magazine.

The Academy had replaced its entire SAPR staff in the spring of 2018 after a 2017 report found the office was “derelict in its duties.” In February, the academy was found to have the highest number of reports of sexual assault and harassment among the service academies during the 2019 to 2020 school year, according to the Colorado Springs Gazette. The number that year was 41, compared to 30 at West Point and 34 at the Naval Academy.

“As a commander and 35-year member of our Air Force, I simply will not accept a culture and climate on our campus, in our campus community, or in our Air and Space Forces, that tolerates any prevalence of sexual violence, sexual harassment, or degrading behavior of any kind,” said Lt. Gen. Richard Clark, the Air Force Academy superintendent, in a statement for Congress on March 2. A 1986 academy graduate himself, Clark has served as superintendent since September, 2020.

In his statement, Clark emphasized the need to respect the privacy of sexual assault survivors. He pointed out the academy’s “Safe-to-Report” policy, which “grants amnesty to victims for certain minor, collateral misconduct, in order to encourage reporting.” Various programs and feedback forms were also built to protect the anonymity of victims, the statement read.

While the 19-year-old legislative intern who Giddings doxed was not a member of the Air Force, airmen and veterans expressed their disapproval of the officer’s actions.

“It is heartbreaking to us that an Air Force officer took it upon herself to release the personal information of an alleged sexual assault victim,” wrote the Idaho Female Veterans Network in a Facebook post in May. “The military has a reputation of intimidating and bullying service men and women who bring forth their sexual assault allegations and the recent actions of Major Giddings shed no hope on this.”

The network pointed out the disappearance and murder of Army Spc. Vanessa Guillén, whose death led to an investigation that revealed reporting assault and harassment was “greatly inhibited for fear of embarrassment and possible reprisal,” an Army report wrote.

“We understand that the victim in this case is not military, however, the person who shared her information publicly is,” the Idaho Female Veterans Network wrote. “It is imperative that a soldier can report their assaults without the fear of retaliation and unfortunately, a lot of leaders like Major Giddings have not made that a possibility.”

At least one airman filed an Inspector General complaint about Giddings.

“Major Giddings’ conduct is unbecoming of an officer and a leader,” one airman said in their complaint. “Regardless if the behavior occurred during her civilian position, her behavior has an effect on current and future members of our Air Force. She should be immediately removed from her position as Idaho State director of admissions for the Air Force Academy and ROTC.”

When asked about whether that airman’s inspector general complaint or any others had been investigated, academy spokesman Dean Miller reiterated that “the Air Force completed its assessment and took appropriate action.”

While the Air Force will not say what it has done regarding Lt. Col. Giddings, the Idaho House of Representatives has been more transparent. On Nov. 15, the House voted 49-19 to censure Giddings. Lawmakers also decided to remove her from the House Commerce and Human Resources Committee. At the hearing preceding the decision, Giddings pushed back and said she had no regrets.

“I would not have done anything differently. I think my intention is pure,” Giddings said on the floor, according to the Idaho Statesman. “I know that nothing I said here today … is going to change your mind. So vote your conscience and we will move forward, and I will continue to fight for freedom.”

Even one of Giddings’ Republican colleagues voiced his disapproval of her actions.

“Candidly, it pains me to have to punish you,” State Rep. Brent Crane, an ethics committee member, said in August, according to the Statesman. “But current and future legislators will look at the actions of this committee, and I hope our action will serve as a guideline as to what conduct is expected of legislators.”