"Wow...let's place all the blame on a man who is biologically designed to act that way ... and not the woman who wanted to do it." 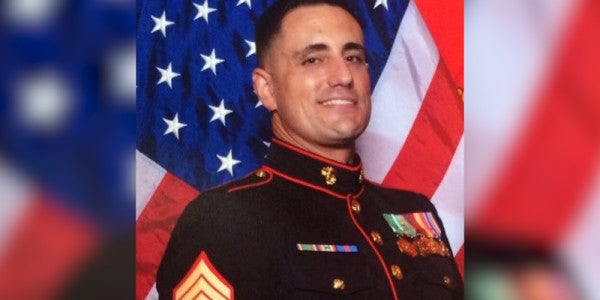 Another Marine is in trouble for his comments on social media blaming an underage girl for allegedly having sex with an older man.

Gunnery Sgt. Nicolas Russo wrote on Facebook recently that men are biologically attracted to young girls and blamed former singer Aaliyah for allegedly getting pregnant when she was an adolescent.

“We are currently looking into this matter regarding alleged social media misconduct,” Marine Training Command said in a statement to Task & Purpose. “The Marine Corps takes every allegation of social media misconduct seriously and does not condone any behavior that does not align with our core values. No additional information is available at this time.”

Russo was recently reassigned to Headquarters and Headquarters Squadron, Marine Corps Air Station Miramar, California, “for reasons unrelated to the social media comments,” said base spokesman Capt. Matthew Gregory. His billet with the squadron has not been determined yet.

He previously served as staff noncommissioned officer in charge of the Marine Detachment at the Center for Naval Aviation Technical Training in San Diego, Gregory told Task & Purpose.

A recent documentary about rap artist R. Kelly claims that he married Aaliyah and got her pregnant when she was only 15 years old. Aaliyah later died in an August 2001 plane crash.

During a Jan. 10 Facebook discussion, one user accused Aaliyah of being a “hoe” for allegedly getting pregnant so young. Another user replied that it was unfair to blame a young girl and not an older man in such a situation.

“Wow…let’s place all the blame on a man who is biologically designed to act that way … and not the woman who wanted to do it,” Russo responded. “And I do believe she was 16.”

“Quite frankly if she pursues it then let her,” Russo continued. “Stop prosecuting adults when this happens. Now if an adult is pursuing then that’s a different story.”

Russo could not be reached for comment on Sunday. During a brief phone call with Task & Purpose, Russo either hung up or the call dropped. Subsequent phone calls went unanswered, and attempts to reach him by email were unsuccessful.

Separately, a senior noncommissioned officer with the 2nd Marine Logistics Group is being investigated by the Naval Criminal Investigative Service after making comments and a live video on Facebook claiming that not all girls who have sexual relationships with men are victims.

“I am not talking about who were manipulated and the individuals who were victims like they didn’t know what the hell was going on,” Master Sgt. Mark McBride said in a Jan. 6 live video. “No, I’m talking about these individuals who are purposely going after older men and trying to have relationships with them for some type of monetary gain. And I’ll represent that to the death.”

Between Jan. 3 and Jan. 5, the Lifetime documentary “Surviving R. Kelly” examined allegations that the singer has committed acts of sexual abuse and pedophilia for decades.

The documentary has sparked a noticeable increase of service members — particularly Marines — making comments on social media that blame sexual assault victims for the behavior of predators, said former Marine Sgt. Erin Kirk-Cuomo, co-founder of the group “Not In My Marine Corps,” which was founded after the 2017 Marines United Facebook page scandal.

“During our work to combat assault and harassment in the military we are consistently struggling with senior enlisted Marines,” Kirk-Cuomo told Task & Purpose. “The R. Kelly documentary has served as an uncovering of many Marines beliefs towards the victims of assault and harassment: Blaming victims for their own assault.

“It’s frustrating to see this openly in the Corps and from leaders who are responsible to support other Marines who have been assaulted or harassed. It is even more upsetting to see this from a gunnery sergeant who is responsible for the safety and training of young Marines. The Marines engaging in the perpetuation of victim shaming and blaming have NO place in our Corps and are not Marines.”

UPDATE: A previous version of this story reported that Russo is assigned to the Center for Naval Aviation Technical Training in San Diego.