This is the most 'Marine Corps' story I've heard in a long, long time. 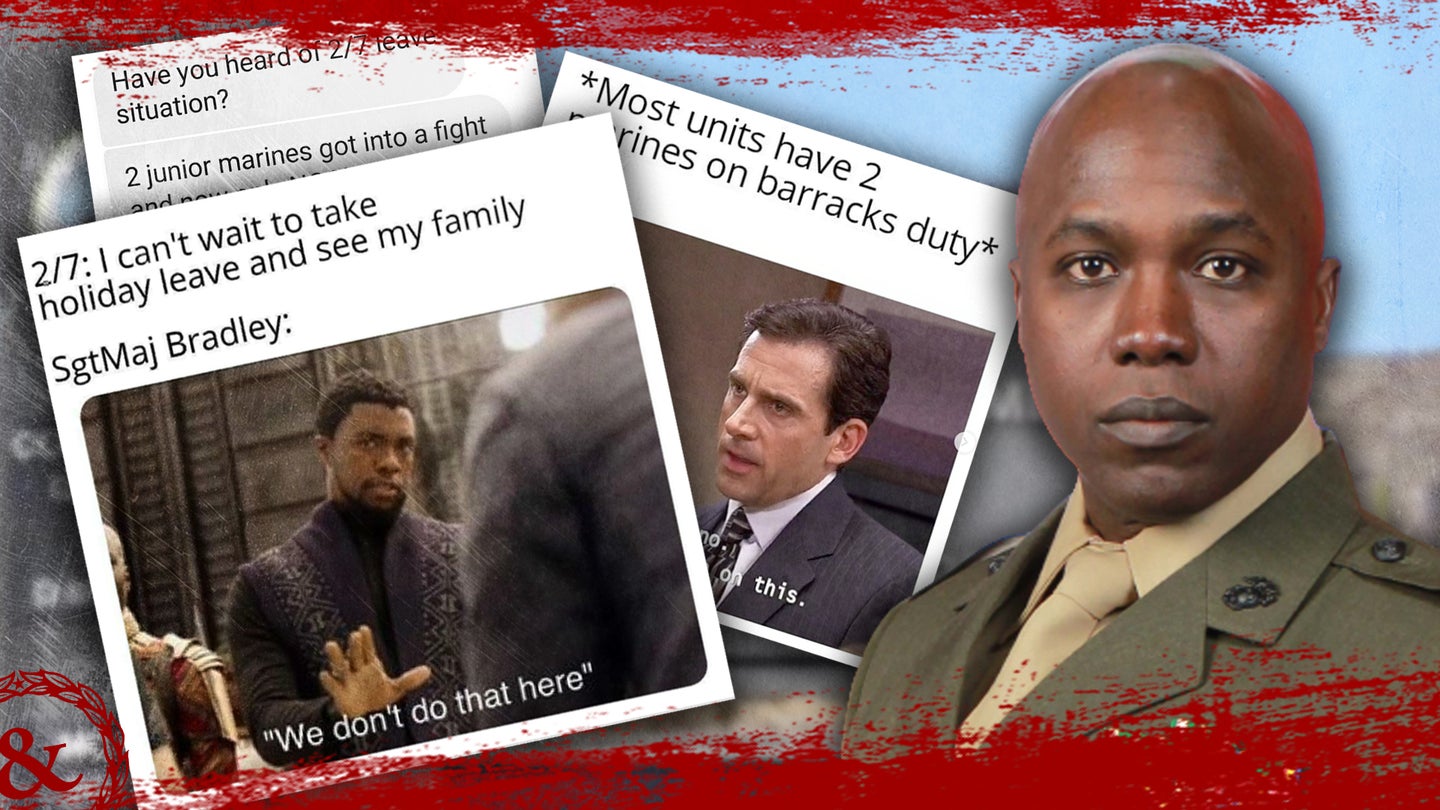 The sergeant major of a Marine infantry battalion at Twentynine Palms, California — the least happy place on earth — is getting absolutely wrecked on social media over claims that the battalion’s noncommissioned officers will be missing out on holiday leave so they can stand extra duty this month as a form of mass punishment.

Now if that’s not the most Marine Corps story you’ve ever heard, I don’t know what is.

This story was first surfaced by Marine-centric social media pages, like DD_214 Memes, which shared a series of messages with Task & Purpose that they claimed came from Marines with 2nd Battalion, 7th Marine Regiment. Based on these accounts, and reporting by Philip Athey with Marine Corps Times, here’s what went down: After two Marines allegedly got into a fight over the Thanksgiving holiday, the duty roster was changed and the battalion’s NCOs were placed on duty for December’s leave block, purportedly at the direction of 2nd Battalion, 7th Marine Regiment’s Sgt. Maj. Nathaniel Bradley.

It appears that the battalion’s NCOs were ordered to fill every duty billet over the leave period, from duty noncommissioned officer to assistant duty, down to sentries, and rovers. These positions are typically divvied up by rank, with lance corporals and below, who outnumber NCOs, standing a larger share of shorter shifts, while one corporal or sergeant at a time might serve as the barracks’ Duty NCO. The abrupt change stoked fears that the unit’s corporals and sergeants would inevitably have to stand watch multiple days, and would likely have to cancel their vacation plans as a result.

On top of all that, the battalion recently returned from an overseas deployment just in time for two weeks of quarantine owing to the ongoing novel coronavirus (COVID-19) pandemic, which means that they already had their post-deployment leave delayed, and now some of them might be getting screwed out of holiday leave as well.

Over the past several days a flood of memes have appeared on Marine-centric social media pages, which paint a rather unflattering picture of the battalion sergeant major in particular, and the command more generally.

Related: I went down a rabbit hole chasing a rumor about a Marine who tried to set the battalion HQ on fire. Here’s what I found out

A Marine spokeswoman denied that Marine NCOs were being directed to stand all duty billets as a form of punishment.

“The non-commissioned officers of 2nd Battalion, 7th Marines are not forced to stand duty as punishment,” Maj. Kendra Motz, a spokeswoman with the 1st Marine Division, told Task & Purpose. “In fact, there has been no increase in the overall number of Marines standing duty. Rather, the command has sought to responsibly bolster the presence of duty non-commissioned officers in the barracks to ensure good order and discipline and the safety of the Marines. Holiday leave will take effect as scheduled, and any suggestion to the contrary is ill-informed.”

Now, there are a few things here that merit a closer look. For starters, the Marine Corps is not outright denying that only NCOs with 2/7 are being directed to stand duty. In fact, they’re tacitly admitting it by acknowledging that the unit sought to “responsibly bolster the presence of duty non-commissioned officers.” Additionally, saying that there has been “no increase in the overall number of Marines standing duty” serves to underscore the problem — that a smaller pool of Marines is being forced to stand the same number of duty positions.

Despite the Corps’ attempts at linguistic ninjutsu, it didn’t seem to work:

In addition to the service’s official statement, a message was reportedly sent to the DD_214 Memes Instagram page from Sgt. Maj. Anthony Pompos, the 7th Regiment sergeant major, and appeared to make the argument that the increase in duty hours was a justified response to a discipline problem in the barracks.

“Bottom line is that they introduced a new policy putting NCOs on duty in the barracks due to a number of issues, not just one fight. They have had hazing investigations, assaults in the barracks, and IG complaints all in the past couple of months. That’s what drove this.”

But then, the message pivots to claim that it was all just a big old misunderstanding after Bradley informed the battalion’s staff noncommissioned officers that the Christmas holiday would have a larger duty roster than Thanksgiving:

“That got interpreted into no NCOs get to go home by some immature SSgts that in turn passed the wrong word down to the ranks.”

The Marine Corps did not respond to repeated questions about the alleged fight that precipitated the change in the duty roster, nor did Pompos respond to Task & Purpose’s request for comment when contacted on Instagram.

As for what’s next, that remains unclear. While Marine Corps Times reported that some Marines reached out to their congressional representatives, others have entertained the idea of requesting mast — a formal process for filing a grievance with the highest levels of one’s chain of command.

“We are committed to ensuring the well-being of the Marines who fill our ranks, and we recognize the right that Marines retain to request mast as a means of directly communicating grievances to, or seeking assistance from, their Commanding Officer(s),” Motz told Task & Purpose.

That said, dropping a bunch of belligerent memes on the internet and flagging down passing reporters does seem to work. So, if any Marines with 2/7 are reading this and have any updates, please reach out to us at tips@taskandpurpose.com or email me directly at James@taskandpurpose.com.

This article was updated on Dec. 16 with additional information after publication.