Photos: Check Out The Army’s New Handgun In Action

On Wednesday, the U.S. Army released the first photos of its new Modular Handgun System taken during U.S. Army Operational... 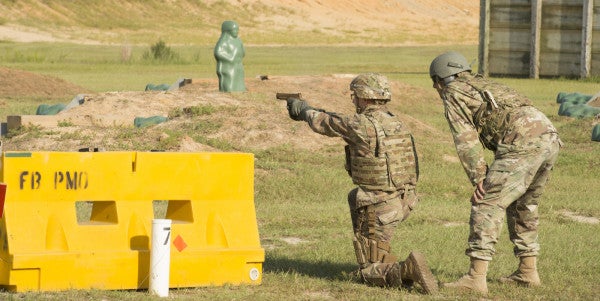 “We wanted to make sure that we have a huge sample to make sure that we've got this right — that the Army has it right,” said OTC's Col. Brian McHugh in an Army release, to ensure the program is pulling personnel from across the service. These include soldiers from the Special Operations Aviation Regiment, the 3rd Infantry Division, 16th Military Police Brigade, and the 508th Parachute Infantry Regiment. OTC is looking to span not just units but also military occupational specialities too, including police, pilots, infantry, and crew chiefs.

“These are the Soldiers who would be using the weapon every day,” explained OTC testing officer Maj. Mindy Brown, “so getting their feedback on the pistol is really what is important for operational testing.”

The Army noted that personnel from other services will also be testing the new pistol as part of the OTC's test program, however, the other major military branches have not yet committed to the new sidearm.

The photos arrive in the wake of controversy surrounding the commercial P320, which the MHS is based on, when rumors erupted that the firearm may not be drop-safe. Despite criticisms Sig Sauer were quick to state that the pistol was rigorously tested and that the MHS did not suffer from the problem. Despite this, Sig Sauer has launched a voluntary upgrade program.

The Army is expecting to begin fielding the M17 in the fall, perhaps as early as October.