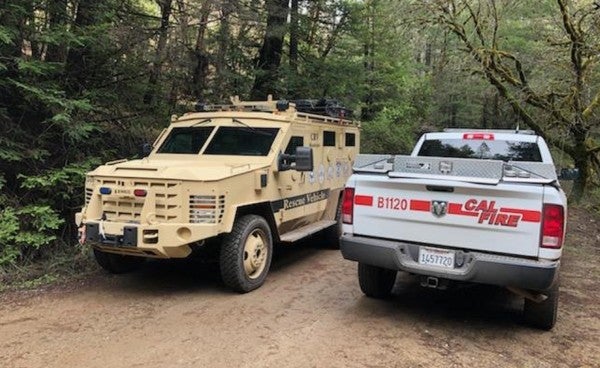 The incident unfolded after the service member, who was identified by the Mendocino County Sheriff's Department as Kevin A. Larson, fled a court-martial hearing two days earlier.

Larson reportedly absconded neighboring Nellis Air Force Base on Jan. 17 prior to the sentencing phase of his court-martial proceedings. An arrest warrant was issued for desertion, according to the sheriff department's statement.

A captain in the Air Force, Larson was convicted on charges of drug possession, drug use, drug distribution, assault, false official statement, and conduct unbecoming of an officer, according to Lt. Scarlet Trujillo, an Air Force spokeswoman. Larson was assigned to the 867th Attack Squadron, a unit belonging to the 432nd Wing, based at Creech.

The following day, an officer with California Highway Patrol attempted to stop Larson on the road, but the airman fled in a 2018 Jeep Wrangler, resulting in a police chase along Highway 101 until Larson turned off the highway onto Reeves Canyon Road, a small back road off the main highway, eluding police.

Special agents with the Air Force's Office of Special Investigations stationed at Beale Air Force Base in Marysville, California, were called in to assist with the search, conducting overnight surveillance along Highway 101, and Reeves Canyon Road.

The next morning law, enforcement searched the area, where they found the Jeep Wrangler parked on a secluded fire trail, roughly eight miles from the Highway intersection Larson had turned off earlier.

As deputies planned to approach the vehicle, they became aware that Larson had “communicated suicidal statements with a friend after his desertion,” according to the sheriff department's statement, and the department brought in a UAV to get a closer look of the area where the jeep was parked.

From the sheriff's department statement:

The UAV was deployed and conducted an aerial viewing of the Jeep Wrangler but the operator was unable to see (with attached video transmitting camera) inside the vehicle as its windows were foggy. The UAV had to return to the staging area because the UAV's battery was almost exhausted.

A short time later the UAV was redeployed and a further viewing of the Jeep Wrangler was conducted. This time there was an object, similar to a person, noted inside the vehicle.

Shortly after that, a single shot was heard, at which point a SWAT team was called in.

At around 1:30 p.m., law enforcement found Larson's body roughly 30 yards from the vehicle. According to the Sheriff department's statement “initial scene investigation suggested the wanted service member had committed suicide by use of a high powered rifle.”

A forensic autopsy is scheduled for Jan. 22.

Larson's death is currently under investigation by the Air Force Office of Special Investigations.

“I extend my deepest sympathies to Kevin's friends and family as they come to terms with this loss,” Col. Stephen Jones, the commander of the 432nd Wing, said in a statement provided to Task & Purpose. “His death was an unexpected tragedy. No matter what his situation or actions, he was a member of our Air Force family.”

UPDATE: This article has been updated with additional information about Kevin A. Larson's court martial proceedings and a statement from the 432nd Wing commander, Col. Stephen Jones.