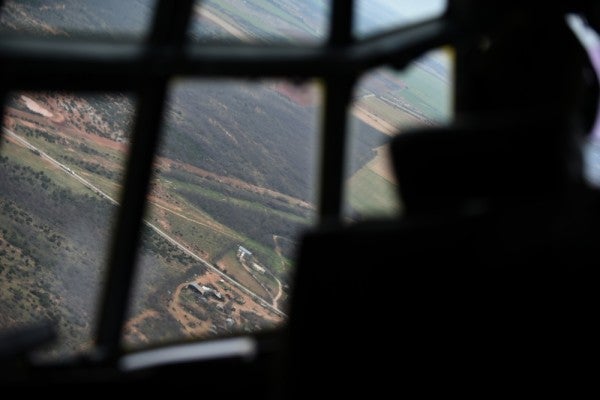 Air Force security forces and local police are searching for an armed airman who fled Dyess Air Force Base on Wednesday after a confrontation with security forces, the Abilene Police Department and Air Force said in separate news releases on Thursday.

“Team Dyess, please remain vigilant for an individual who is considered armed and dangerous,” the base wrote on its Facebook page on Thursday. “The person is described as a white male, short/shaved brown hair, approximately 5'8”, last seen wearing a long sleeve black shirt with blue jeans.”

According to the Abilene Police Department, Air Force security forces met with the airman at his home on the base Wednesday afternoon “regarding a personnel matter,” but during the course of the interaction, the airman assaulted other airmen and retreated inside the house.

“The male suspect was armed with at least one weapon and had barricaded himself inside the home,” the department wrote, prompting Air Force defenders to call in police assistance. But the airman was one step ahead of them, police said, because he then proceeded to kick out a window of his home, scale the base’s southernmost fence, and flee on foot into a heavily wooded area on the other side.

“Numerous law enforcement agencies assisted in trying to locate him,” police said, including a helicopter crew dispatched from Lubbock, a city about 140 miles northwest of Dyess.

But the airman evaded capture in the difficult and wooded terrain, police said.

Fox West Texas reported late Wednesday night that the Abilene Police Department had called off the search, and that a heavy police presence would remain at Dyess through the evening. However, an APD release on its website dated April 23 said that the investigation is ongoing.

In a post on its Facebook page on Thursday, Dyess Air Force Base said base security forces were still working with APD on the search.