Air Force staff sergeant to be indicted over alleged theft of $30,000 in government property from hurricane-ravaged base

Staff Sgt. Dairian D. James of Panama City hasn’t been indicted yet because legal proceedings were delayed due to the novel coronavirus. 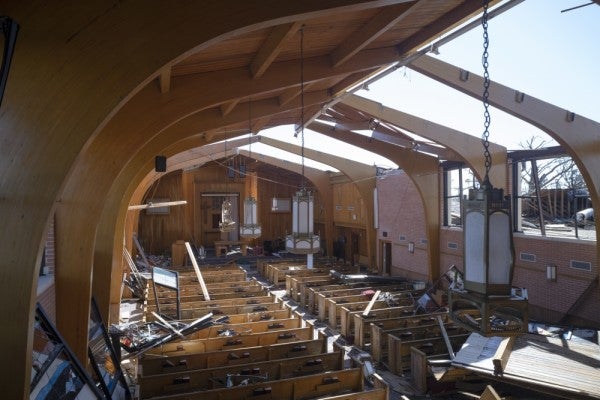 An Air Force staff sergeant in Florida is due to be indicted on criminal charges of stealing more than $30,000 worth of government property from Tyndall Air Force Base, according to court documents and reporting from Fresh Take Florida on Monday.

The only reason Staff Sgt. Dairian D. James of Panama City hasn’t already been indicted is because legal proceedings were delayed due to the novel coronavirus (COVID-19) pandemic, Linda Card, the spokeswoman for the Air Force Office of Special Investigations, told Fresh Take Florida, a news service operated by University of Florida College of Journalism and Communication.

It could still be weeks before James is formally charged, she said.

The investigation kicked off in February when $40,000 in government industrial cabinets were reported missing from a building on the base which suffered severe damage from Hurricane Michael in October 2018. Nearly two years later, the base is still working on getting the clearance to finish demolishing damaged buildings and start the rebuild process, which is estimated to cost $4.25 billion.

Specifically, an officer at the base said five cabinets and three end tables were missing, and the total value of the goods was later estimated at $33,181, according to an affidavit for a search warrant first obtained by Fresh Take Florida.

The Air Force investigated James after surveillance footage spotted a grey Toyota Tundra belonging to his father, Steffron James, leaving the base towing a trailer loaded with the stolen items on January 25 of this year.

When questioned by Air Force investigators at his home in Tennessee, the elder James said he and his son “had taken the cabinets and other property because they thought it was garbage and not worth anything,” according to the affidavit.

The cabinets weren’t the only items missing from the base. The day before the cabinets were stolen, surveillance cameras also picked up Steffron James’ truck pulling a trailer loaded with a green felt top pool table, a foosball table and something that looked like a ping-pong table away from the base.

Two days later, airmen noticed that a ping-pong table, foosball table and green-colored felt pool table had gone missing from the base. When shown security footage by investigators, they said the items in the back of the Steffron James’ truck looked identical to the missing tables.

A complicating factor is that base staff couldn’t locate receipts of purchase for the foosball or pool tables, and the tables weren’t marked to indicate they were Air Force property.

However, once investigators received a search warrant for James’ home in Panama City, they found 56 items including a foosball table, a pool table, patio furniture, bicycles, desks, tools, rifle and pistol magazines, bar stools and cabinets.

It was not clear what the value of the items were, or if they accounted for the total $30,000 worth of property of which James may be charged with stealing. When investigators tried to question James about the theft, the airman requested a lawyer and did not discuss the matter, according to the affidavit.