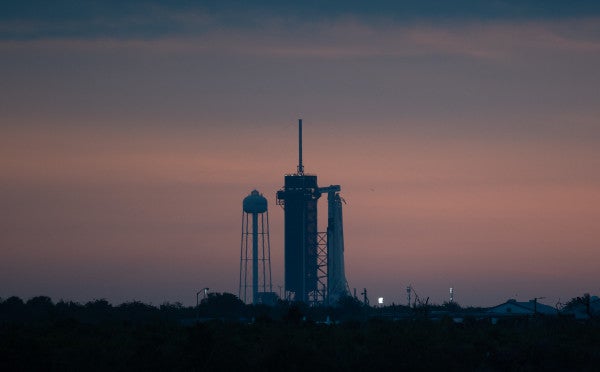 America is sending up its first manned space launch in nine years today, and there is a galaxy of options out there for you to watch it live.

Wait, you ask, there’s a space launch going on today? That’s right, if all goes according to plan, today at 4:33 p.m., two best buddies: former Marine Corps pilot Doug Hurley and Air Force Col. Bob Behnken, will become the first NASA astronauts to launch into space from U.S. soil since the last space shuttle launch in 2011.

Since then, American astronauts have launched to space from Russia, at great expense to American taxpayers, according to CNN. But what’s even crazier about today’s launch is that it marks the first time for NASA to outsource the development of a manned spacecraft to the private sector.

SpaceX, the space transportation company founded by aerial reconnaissance-fan Elon Musk, built the Crew Dragon spacecraft in whose seats Hurley and Behnken will ride up towards the International Space Station today.

“The thinking was that commercial companies could drive down costs and spur innovation, and NASA would have more time and resources to focus on exploring deeper into the solar system,” CNN reported.

The mission, called Demo-2, is meant to be the final test for the Crew Dragon spacecraft. If all goes well, the ship will dock with the ISS in about 24 hours, NASA said. Behnken and Hurley will perform tests and conduct research with the two Russians and one American currently aboard the station, NASA said. While it’s not clear yet how long Behnken and Hurley will stay up there, when they come back to Earth they will splashdown off the coast of Florida.

Ok, so now that you know all the backstory, here’s how to tune in!

NASA webcast. America’s favorite space agency will begin covering the launch at 12:15 p.m. EST and continue coverage through Demo-2’s scheduled arrival at ISS on Thursday, May 28, according to Space.com.

According to Space.com, you can also tune in through NASA’s apps on iOS and Android, or through Roku, Pluto TV, Hulu, DirectTV, DISH Network, Google Fiber and NASA TV on Satellite Galaxy 13.

Below is also a complete schedule for NASA’s webcast, according to Space.com:

SpaceX is also streaming the event on its YouTube page. But that’s not all, ABC News and the National Geographic Channel also teamed up to cover the launch, as well as the Discovery and Science Channels.

Celebrity physicist Neil deGrasse Tyson and his employer, the American Museum of Natural History, are also launching a SpaceFest at Home celebration which should have plenty of mind-blowing science facts.

And once all that’s over, be sure to check out Netflix’s new comedy Space Force, which we’ve given two space-suited thumbs up!