Why the Pentagon is fanboying over Elon Musk’s space company

“Following a commercial approach, just like SpaceX, allowed me to accomplish a number of ‘firsts.'" 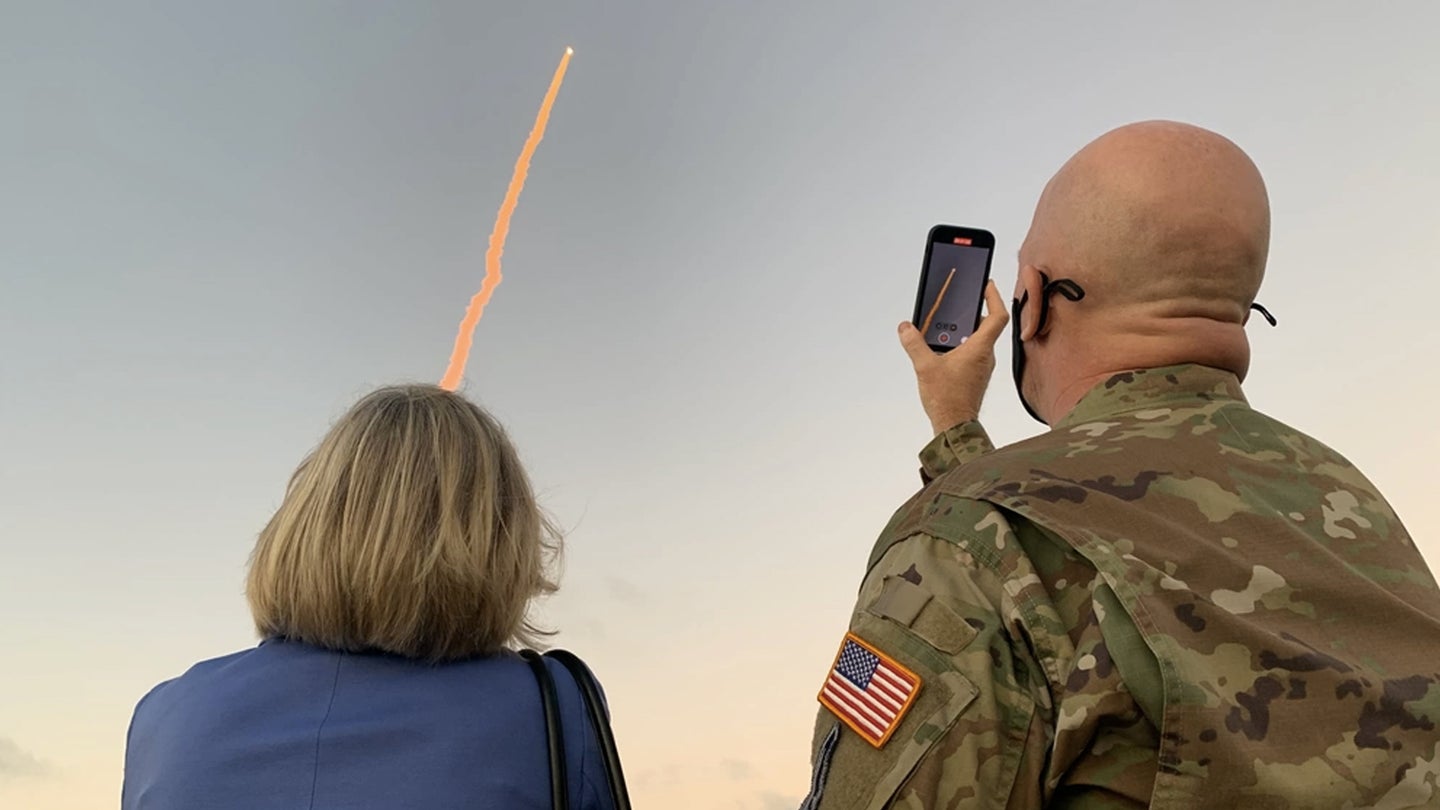 Members of the military often serve as role models for men, women, boys and girls across the country. But who serves as a role model for people in the military? Often these days, the answer seems to be SpaceX, the private aerospace company founded by entrepreneur Elon Musk. Just this week, two senior Pentagon officials have stated that they wish the Department of Defense worked more like the 20-year-old aerospace company hoping to one day spur the colonization of Mars.

“By the time the government manages to produce something, it’s too often obsolete; no business would ever survive this way, nor should it,” wrote Preston Dunlap, the chief architect officer for the Air Force, in a memo announcing his pending resignation on Tuesday. In the letter, Dunlap offered advice for how innovators can overcome Pentagon bureaucracy to develop new technologies. A good role model for doing that? SpaceX.

“Following a commercial approach, just like SpaceX, allowed me to accomplish a number of ‘firsts’ in DoD in under two years,” Dunlap wrote.

Military officials also admire SpaceX’s sheer technological abilities. On Thursday, Dave Tremper, the director of electronic warfare at the Office of the Secretary of Defense, praised SpaceX for reportedly beating back Russian attempts to break up internet access in Ukraine.

“From an EW technologist perspective, that is fantastic. That paradigm and how they did that is kind of eye-watering to me,” Tremper told Breaking Defense. “The way that Starlink was able to upgrade when a threat showed up, we need to be able to have that ability.”

The officials’ comments come at a time when many uniformed and civilian members of the military are calling for the Department of Defense to undergo radical change in order to maintain its technological advantage over the Chinese People’s Liberation Army, which has undertaken a massive modernization effort in recent years. Specific areas of modernization include artificial intelligence, drone swarms, hypersonic weapons and cyber warfare. However, some critics say that America’s military-industrial-congressional complex, with its oligarchy of large defense companies; byzantine acquisitions and requirements processes; and entrenched Congressional interests, does not move fast enough to keep up with rapid change.

“DoD suffers from an acquisition ‘blue screen of death’ that requires more of a repair of the proverbial DoD hard drive, not simply a rebooting,” Dunlap said. “Much more must be done if DoD is going to regrow its thinning technological edge.”

By contrast, SpaceX seems like it is operating on a different planet. In just two decades, the California-based company developed reusable rockets for sending missions into space at much lower cost; became the first private company to deliver NASA astronauts to the International Space Station; and has won a long list of military contracts to launch satellites into space; build missile-tracking satellites; and develop rocket-delivered transport and weapons systems.

“Look at SpaceX in this country,” said then-Vice Chairman of the Joint Chiefs of Staff, Air Force Gen. John Hyten, in a 2020 interview with the Center for Strategic & International Studies.

“There were some pretty spectacular failures. Did they stop? No. … They learned from the failures,” he said. “They launched rapidly again. They changed systems. They changed subsystems. They’d go in a completely different direction.”

Even this agility was nearly incompatible with Department of Defense bureaucracy, which is so dense that many critics say it drives away companies who want to work with them.

“What SpaceX had to do to effectively do business with the United States Air Force is embarrass us in public,” Hyten said. The general may have been referring to SpaceX filing a lawsuit against the Air Force in 2014 during a years-long process to get its Falcon 9 rocket certified for military launches.

“No service secretary likes to be embarrassed in public,” Hyten said. “But that turned into a mutually beneficial partnership.”

SpaceX is not the only private company building space rockets, and not the only technology company that defense officials are looking to for guidance. Hyten said he was amazed by watching the way tech companies in Silicon Valley, Los Angeles and Cambridge, Massachusetts do business. As former congressional staffer Christian Brose wrote in his influential book “The Kill Chain,” those companies have heaps of private capital and have worked extensively on the same problems of connectivity and computing that the military is struggling with today. However, a gulf exists between the two communities because the military is a difficult partner to work with.

“Senior leaders in the Department of Defense and Congress have a tendency to talk a big game about the importance of new technologies for the U.S. military,” wrote Brose, who is now chief strategy officer for the venture capital-backed defense start-up Anduril Industries. “But when push comes to shove, most of the biggest contracts continue to flow by the billions to legacy military platforms and the traditional defense companies that manufacture them.”

The military’s problem is how to compete with China, and many officials think that working with Silicon Valley companies like SpaceX and emulating their practices is the way to solve it. However, some experts think that the boogeyman of Pentagon bureaucracy, while slow and onerous, is more valuable than many technologists believe.

“Brose correctly diagnoses the ills of the defense acquisition bureaucracy, but its goals [of fairness and cost-effectiveness] are still worthwhile,” wrote RAND researcher Jonathan Wong in a 2020 review of The Kill Chain.

“Brose is right that mindless adherence to acquisition rules without considering the wider context wastes time and effort,” Wong wrote. “One might be better served by continuing the hard work of reforming the bureaucracy — not sidestepping it.”

Adapting commercial solutions such as Apple’s iCloud for targeting data for airstrikes may not even be desirable, Wong said. After all, it’s not clear if any such technology will work when an enemy tries “to disrupt that network and turn its advantage into a liability,” the researcher said.

Despite the Silicon Valley-esque vision of warfare being determined by networks of connected devices, nobody knows how a future war will play out, Wong wrote. The researcher advocated for increased reform of acquisition regulations and the military requirements process, which would better allow the military to adapt to changes in general, and not just gamble all on iCloud warfare.

“Richard Danzig observed that predictions about the future of war are consistently wrong,” Wong said. “It is better to be circumspect about the nature of future conflicts and prepare for predictive failures.”

Beyond the economic and political considerations of emulating companies such as SpaceX, there are also ethical complications. Elon Musk, the founder of SpaceX, has spread misinformation about the COVID-19 pandemic and mocked the use of gender pronouns. The companies he founded, Tesla and SpaceX, have been investigated for workplace safety violations; harassment; and underpaying their employees. The U.S. military is also rife with discrimination, harassment and unfair treatment of its employees, and perhaps ethical considerations are not as significant when national security is on the line and the military’s purpose is to destroy America’s enemies. That tension is portrayed well in a recent WIRED review of “Return to Space” — a Netflix documentary about the rise of SpaceX — which was critical of the movie for seeming like an advertisement for the company.

“Musk’s rhetoric might make it seem like SpaceX will usher in a new era of spaceflight and save humanity by building colonies on Mars and other inhospitable worlds, but his company, and others like it, wouldn’t exist without NASA and NASA contracts,” WIRED wrote.

About midway through the film, a stirring scene shows SpaceX’s first successful landing of a Falcon 9 rocket and cuts to former NASA deputy administrator Lori Garver, who says Elon Musk and SpaceX have changed the space industry by making “everything” reusable at a tenth of the cost.

“That may be true,” wrote WIRED, “but NASA’s still footing the bill.”