The Brilliance Behind Los Angeles’ Plan To Find Jobs For 10,000 Veterans 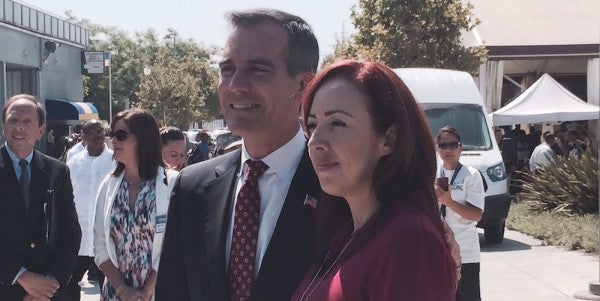 Garcetti’s veterans hiring initiative, called 10,000 Strong, began a year ago. On Tuesday, the city observed the program’s first anniversary since its launch.

However, you could say the seed was planted with his grandfather's service in World War II. Earning U.S. citizenship by way of his military service, Garcetti’s Mexican-born grandfather's time in the military earned him a trade as a barber in a south Los Angeles shop near the University of Southern California.

Garcetti's father, Gil Garcetti, attended University of Southern California on a scholarship, facilitated by the professors who got their hair cut a short walk from campus by his father. Eric Garcetti, a Rhodes Scholar, began his career in public policy teaching at USC.

For Lopez, the journey to Tuesday’s career summit — a job fair on a massive scale — was rockier and more daunting.

As an Army sergeant, she worked as an chemical, biological, radiological, and nuclear specialist. But like many veterans, she failed to secure employment in the months after she left the military.

“With her two sons, and her two dogs, she found herself living on the streets,” Garcetti told a crowd of hundreds of veterans and prospective employees gathered Tuesday at the veterans career summit, held at Los Angeles Trade Technical College.

Lopez was one of the first veterans hired last year as a result of the 10,000 Strong campaign.

She used the last bit of money she had on hand to buy some expensive resume paper. Then she circulated her career bona fides at the inaugural summit.

The small but vital investment paid off. Lopez was hired by Goodwill Industries, a major non-profit, as a veteran readjustment specialist.

“The Goodwill veteran employment project is awesome,” Lopez said at the event.

Of her brush with homelessness, she said, “It almost feels like this was something I had to go through in order to know what I know to assist the veterans.”

More than 100 major employers, service providers, and non-profits in the initiative are enrolled in the 10,000 Strong program including Elon Musk’s SpaceX corporation, Coca Cola, Bank of America, Deloitte, and NBCUniversal Television.

With a goal to hire 10,000 veterans by 2017, Garcetti announced that 4,535 have already found employment so far, with tracking to see another 5,000 hires this year, keeping the program ahead of schedule.

Aggressive recruitment and veteran hiring constitutes one of the most effective strategies for meeting the goal of eliminating veteran homelessness, Garcetti said.

Los Angeles’ hiring efforts have received national attention as cities across the nation grapple with eliminating veteran homelessness and unemployment. A study released last year by the USC Center for Innovation and Research on Veterans & Military Families found that 80% of post-9/11 veterans leave the military without a job lined up.

“Eighty percent is an astounding statistic,” Garcetti said. “No veteran should have to face the search for a job alone. Not in my city. Not in my state. Not in this nation.”

Garcetti related that when the first 10,000 Strong career summit launched in 2014, among the lessons learned was that there were a lot of companies reaching out to veterans for interviews, but the vets weren’t closing the deal.

Some of this had to do with the culture and information gaps that divide the military and veteran communities and the private sector. Veterans are usually not informed about how the skills they acquired in service might be useful and transfer to the civilian job market.

Dick Gray, a Vietnam War veteran and executive who mentors in the Wounded Warrior program, said that an infantry soldier often is not aware how vital his teamwork and communications skills can be in a civilian workplace.

The USC study found also that 50% of respondents in the study reported a lack of knowledge of how to locate job-search resources. To that end, the 10,000 Strong program is innovating technology to enhance the ease of access for veterans.

One such innovation is Vet2Text, a new text message service Garcetti announced on Tuesday to connect veterans on the job hunt with fellow veteran volunteers who can help.

“Not a call center operator,” Garcetti said. “A peer. Vet2Text is the first program of its kind in the country.”

The system, which connects the veteran to the city’s 211 job and service hotline, was developed by Volunteers of America and the USC Veterans Collaborative.

“It isn’t just about workforce development,” Garcetti said. “It's about human development.”

CORRECTION: This article was updated to reflect that Vanessa Lopez was a chemical, biological, radiological, and nuclear specialist in the U.S. Army. (7/21/2015; 8:53 am)