Trump On His High School Experience: “I Always Felt That I Was In The Military”

In a forthcoming biography “Never Enough: Donald Trump and The Pursuit of Success,” by Michael D’Antonio, a Pulitzer Prize-winning reporter,... 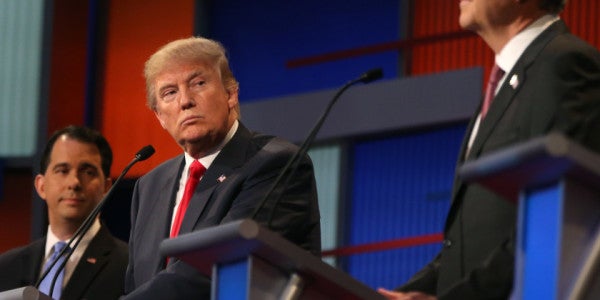 In a forthcoming biography “Never Enough: Donald Trump and The Pursuit of Success,” by Michael D’Antonio, a Pulitzer Prize-winning reporter, Trump equates his time at the New York Military Academy to military service, saying that he had “more training militarily than a lot of the guys that go into the military.”

Trump said that even though he never served, the would-be commander in chief “always felt that I was in the military” because of his five years at a military-themed boarding school. Trump graduated in 1964, and his time at the New York Military Academy represents his only flirtation with military service, as he received medical deferments and then was ultimately not drafted.

“My number was so incredible and it was a very high draft number,” Trump said, referring to his high draft lottery number, 356 out of 366. He also received multiple draft deferments due to “heel spurs,” on “both feet.”

“Anyway so I never had to do that, but I felt that I was in the military in the true sense because I dealt with those people,” Trump reportedly said.