“It’s a horrific murder ... There are people out there that know what happened.” 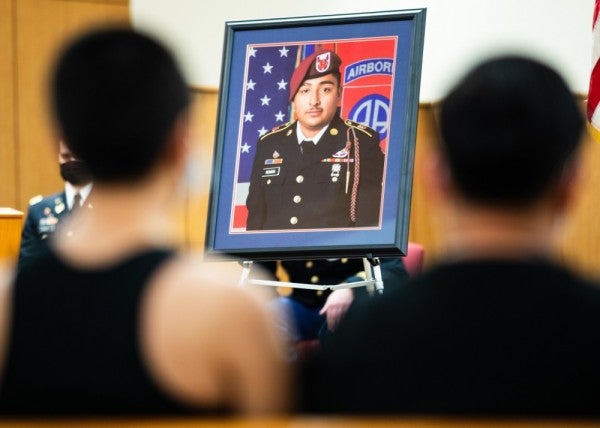 A chorus of All-American paratroopers put on a stunning tribute for a fallen soldier at Fort Bragg, North Carolina on Wednesday with a powerful rendition of “Amazing Grace.”

The performance was in honor of Spc. Enrique Roman-Martinez, whose remains washed ashore at a national park on May 29. An investigation into the paratrooper’s death is ongoing.

The @82ndABNDiv Chorus sings "Amazing Grace" during a memorial service for Spc. Enrique Roman-Martinez on @FtBraggNC.

The 21-year-old paratrooper's remains washed up on Cape Lookout National Seashore on May 29th.

A 21-year-old human resource specialist, Roman-Martinez was last seen on May 22 at a campsite at Cape Lookout National Seashore, a remote national park that’s about a five hour drive east of Fort Bragg, where Roman-Martinez and the rest of the 82nd is based.

When the paratrooper’s partial remains were found a week later, the Army ruled the death a homicide and put out a $15,000 reward for information. The Army's Criminal Investigation Command is leading the investigation in his death and has since upped the reward to $25,000, The Fayetteville Observer reported July 30.

Nearly three months after his death, the family of Roman-Martinez still has few answers about what happened. His sister, Griselda Martinez, told The Observer in July that there were inconsistencies in what was known about her brother’s death.

Other soldiers said they saw Roman-Martinez last about midnight, but he wouldn't have gone for a walk in the dark and wasn't a good enough swimmer to go into the ocean at night, she told the Observer.

Meanwhile, the Army has told the family very little for fear that it might “impede the investigation,” she said.

“Someone has to know something,” Martinez said, adding that her mother “stays up all night thinking about what might have happened.”

On July 30, the Observer reported that the FBI was helping the Army with the investigation along with state and local law enforcement agencies.

A Chino, California native, Roman-Martinez was honored back home at a vigil on Saturday, where his family again called for answers.

“We want these people that went along with my brother to know that it hurts us, and we want to know what’s going on,” said one of his other sisters, Veronica Martinez, according to Los Angeles news station KTLA.

“It’s a horrific murder,” said Rep. Norma Torres (D-Calif.) at the vigil. “There are people out there that know what happened.”

Those with tips can reach Army CID Special Agents at 910-396-8777 or the Military Police Desk at 910-396-1179. A GoFundMe page “Justice For Roman” has been set up for the Martinez family to pay for a lawyer and a memorial service, KTLA reported.

At the memorial ceremony in Fort Bragg, soldiers affirmed their commitment to the investigation.

“Losing a Paratrooper is heartbreaking, but the effects of that loss are exponentially greater when caused by an act of senseless violence,” the 82nd wrote on its Facebook page in a post about the ceremony. “Even as we mourn, we will not stop in our pursuit of justice until it is served.”

Fellow paratroopers were distraught over their comrade's death.

“Spc. Roman was, and forever will be, a Paratrooper, and someone I will always have in my heart,” said Sgt. 1st Class Amos Stevenson, the human resources NCO in charge of Roman-Martinez' unit, at the Fort Bragg memorial ceremony.

“He had aspirations of being more than a Paratrooper,” Stevenson said. “For the paratroopers here who didn't fully know Spc. Roman, I can tell you he was an amazing person and an amazing paratrooper who positively affected everyone he encountered.”

At the end of their performance on Wednesday, the 82nd Airborne chorus fell back into formation. The only sound was their boots as they marched off the stage.