"It has been a privilege to serve alongside our airmen over the past two years and I am proud of the progress that we have made restoring our nation's defense." 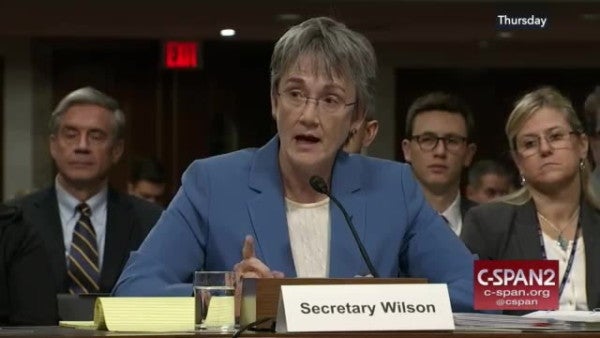 Air Force Secretary Heather Wilson has resigned after being selected as the “sole finalist” to become president of the University of Texas at El Paso, the service confirmed on Friday.

If she is formally appointed as university president, Wilson will step down on May 31 to allow for a smooth transition, said Air Force spokeswoman Ann Stefanek.

“It has been a privilege to serve alongside our airmen over the past two years and I am proud of the progress that we have made restoring our nation's defense,” Wilson said in a statement.

“We have improved the readiness of the force; we have cut years out of acquisition schedules and gotten better prices through competition; we have repealed hundreds of superfluous regulations; and we have strengthened our ability to deter and dominate in space.”

Rumored to be a possible nominee for defense secretary, Wilson was confirmed as Air Force secretary on May 8, 2017. She graduated from the Air Force Academy in 1982 as part of the third class to accept women and went on to represent New Mexico as a Congresswoman from 1998 until 2009.

“Secretary Wilson has had a remarkable career of firsts in education and national service, and it's easy to understand why the search advisory committee and the board have been so impressed,” University of Texas System Chancellor James Milliken said in a statement. “She has the experience, talent and leadership to build on UTEP's exceptional momentum.”

SEE ALSO: 'Captain Marvel' is here to punch you in the face and energy blast your ass right into the nearest Air Force recruiting office

WATCH NEXT: Stopping The Next Texas Church Shooting