The Air Force Academy’s falcon mascot should fully recover from injuries that she suffered from a prank by West Point... 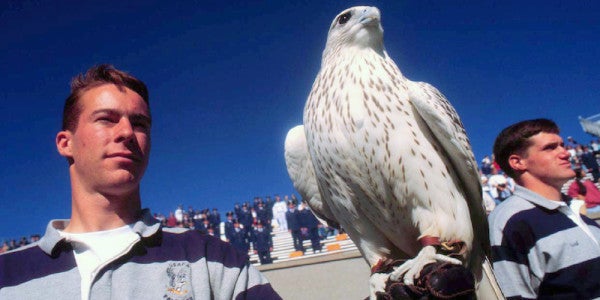 “Aurora was thoroughly examined by the specialists here and her wings are not fracture,” Bunko told Task & Purpose on Monday.

“We were relieved and thrilled to hear yesterday that she is expected to make a full recovery. We're so thankful for the veterinarians and the falconry team who took care of her and grateful for all of the public outpouring of support for this beautiful bird.”

The 22-year-old gyrfalcon was hurt when West Point cadets removed the bird from her coop, the Colorado Gazette reported. The U.S. Military Academy has launched an investigation into the matter.

Initially, it was feared that Aurora would have to be euthanized due to her age.

“She will continue to get treatment for her injuries and get some much needed rest over the next couple of weeks,” Bunko said on Tuesday, “But we expect her to be back out with her fans soon!”