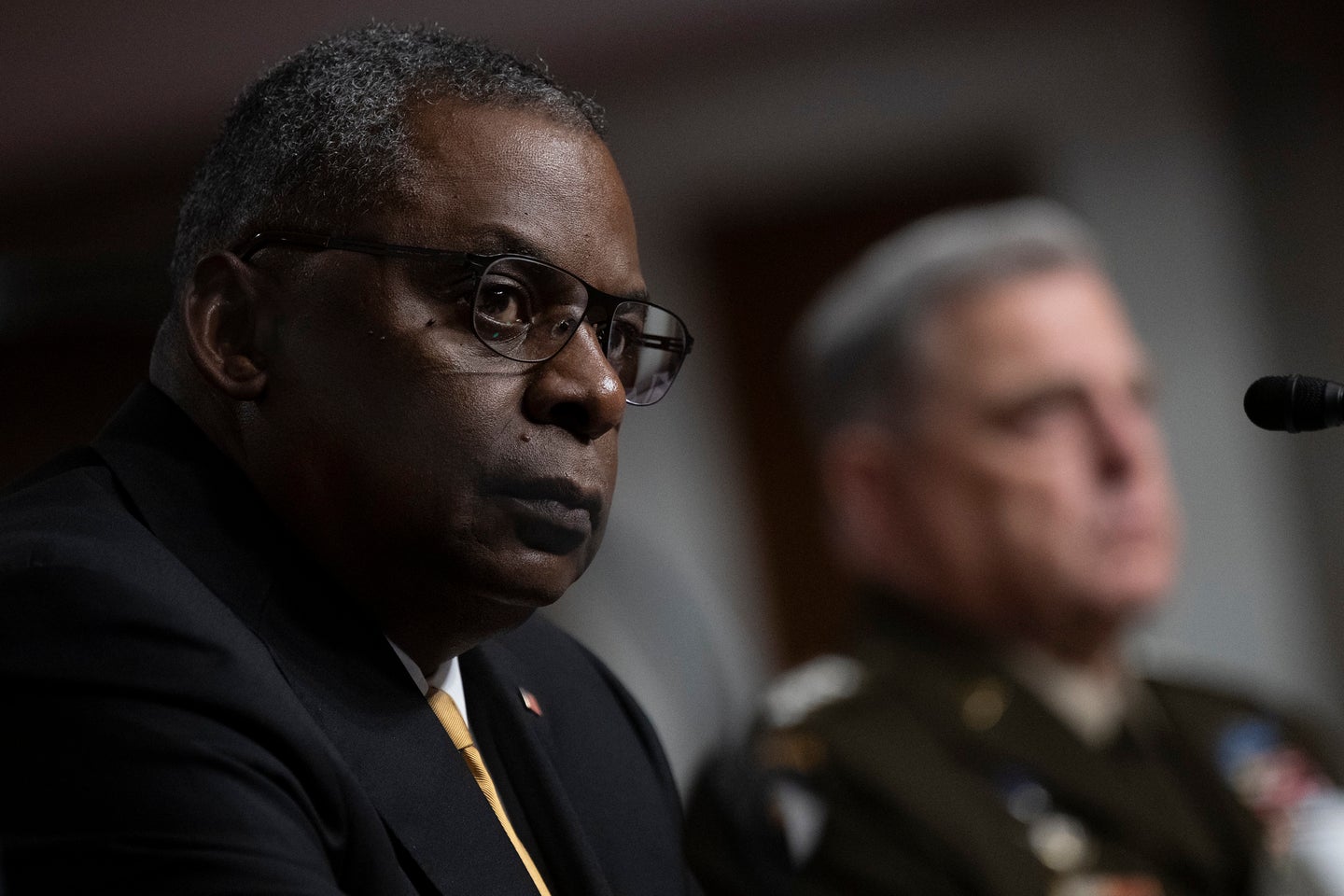 Secretary of Defense Lloyd J. Austin III, Under Secretary of Defense (Comptroller) Michael McCord and Chairman of the Joint Chiefs of Staff, Gen. Mark A. Milley answer questions from the Senate Armed Services Committee during the Department of Defense budget posture in review of the Defense Authorization Request for Fiscal Year 2022, June 10, 2021. (DoD Photo by Chad J. McNeeley)
SHARE

The Pentagon’s Inspector General is looking for a senior executive to prevent and respond to “supremacist, extremist, and criminal gang activity” in the U.S. military, according to a job listing posted to the federal government’s hiring website.

The Department of Defense recently added the extremism-focused deputy inspector general role, according to The New York Times, though the position appears to have been renamed from dealing with “military insider threats” to “extremism.” The DoD’s Inspector General website currently lists Stephanie Wright in the role but in the past, she was deputy inspector general for diversity and inclusion/military insider threats.

“We updated the title and component name recently to align more closely with the statute,” said Dwrena Allen, a spokesperson for the Pentagon Inspector General.

According to the listing, this person would also work to establish and maintain relationships with the Office of the Secretary of Defense, military branches, and other inspectors general; develop and implement a “comprehensive strategic plan” for DIEM oversight; prepare semiannual reports to Congress, and develop instructions, policies, and programs.

While most members of the armed services serve honorably, extremist organizations have long seen the military as an ideal recruiting ground. An FBI assessment distributed to law enforcement agencies in February concluded that white supremacists would “very likely seek affiliation with military and law enforcement entities in furtherance” of their ideologies, as ABC News reported. But warning signs go back more than a decade: a 2009 Homeland Security report warned that military veterans possess combat skills and experiences that are attractive to right-wing extremists in particular.

In recent years, experts have sounded alarm bells over the rise of extremism within the ranks. For many, that issue was brought to the fore in the wake of the Jan. 6 attack on the U.S. Capitol. This was in part due to revelations that more than 50 of those charged after the riot had a military or law enforcement history — raising fears that anti-government and other extremist sentiments had taken root within the military and veterans community.

But as Heather Williams, a senior policy researcher at the Rand Corporation, noted in February, military leaders “are fighting this battle blind,” since only two studies have specifically looked into military extremism and both are more than two decades old. “Like sexual harassment, extremism among the troops may not be reported; its pervasiveness may not be evident until one goes looking,” Williams wrote.

A Task & Purpose analysis documented 40 examples of extremists in the military since 2016, although it’s almost certainly an undercount. Several service members were found to be affiliated with neo-Nazi and white nationalist groups, and one soldier has been charged with planning a “mass casualty” attack on fellow soldiers.

Related: These are the faces of extremism in the military

More recently, Pentagon officials and lawmakers have sparred over the definition of “extremism,” which can be found in a Defense Department instruction that was last updated in 2012. A key part of the regulation states that troops should not promote supremacist, extremist, or criminal gang doctrine, including ideology or causes “that advance, encourage, or advocate illegal discrimination based on race, creed, color, sex, religion, ethnicity, or national origin.”

Yet joining extremist groups is allowed as long as a service member isn’t an “active participant.” It’s a loophole the Pentagon says it’s working to close, though it’s unclear when that might happen. Pentagon spokesman John Kirby said in April it’s “not something” that is in “the immediate actions.”

“I believe that 99.9% of our troops are focused on the right things, embracing the right values, each and every day,” Defense Secretary Lloyd Austin testified to Congress last week.

“Small numbers of people in this area can have an outsized impact on our organization,” Austin said. “So we want to ensure we’re providing the right climate, the right environment for our troops to work and live in. We are focused on extremist behavior. Not what people think, or political ideas, or religious ideas. But extremist behavior.”