Swords, rifles, and booze: These were the gifts given to Pentagon officials in 2017

Gifts to military officials on the list seemed to be heavy on swords and sabers, though watches were also a favorite. 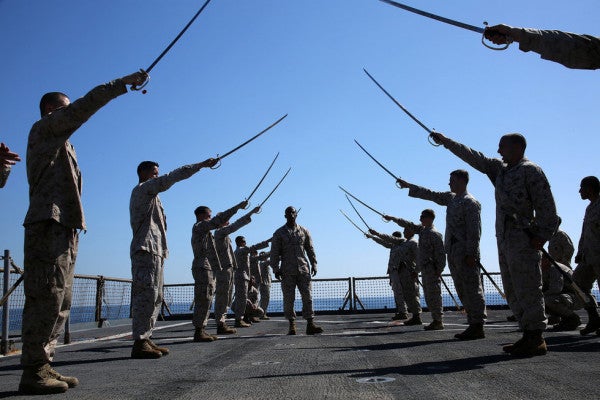 Top officials at the Pentagon received everything from iPhones to assault rifles in 2017, according to the latest roundup of gifts received from foreign governments compiled by the State Department.

As required by law, State puts together an annual list of gifts or travel expenses given to U.S. government officials across all federal agencies, civilian and military. And not surprisingly, President Donald Trump topped the list with the most expensive item — a calligraphy display and porcelain dinnerware set worth more than $30,000 given to him from the president of China, which was later turned over to the National Archives.

Gifts to military officials on the list seemed to be heavy on swords and sabers, though watches were also a favorite. Here are some that stood out:

You can check out the full list of gifts given to government officials right here.

SEE ALSO: He was nearly killed by a Taliban RPG. Now he's safe in the United States, and one of its newest citizens

Gen. Joseph Votel, commander of CentCom, got an Apple iPhone 7 and a watch from Qatar's Chief of Staff of the Armed Forces

Maj. Gen. Hamad Bin-Ali gave Votel the iPhone and a Baron Phillippe watch, worth about $649 and $750, respectively, on Jan. 17, 2017. Both were pending turn-in to the General Services Administration.

Panos Kammenos gave Mattis the sword on April 20, 2017, which State described as “sword with Medusa head hilt in presentation case.” Estimated to be worth $440, it's now in the Office of the Secretary of Defense locker with many more gifts.

Mattis also got a blinged-out $7,600 saber and scabbard set from Qatar

Maj. Gen. Hamad Bin Ali Al-Attiyah gifted a saber with a scabbard “clad in reptile skin plus gilt mounts and gilt tassels, in white fabric bag and statue, depicting silver clad resin falcon with gilt beak, legs wrapped in bands.” Mattis did not ride off into the sunset with the sword, but instead turned it over to the OSD Vault.

Perhaps the coolest gift Mattis got was a Fort 224 rifle, which is manufactured by a Ukrainian weapons manufacturer. Ukrainian President Petro Poroshenko brought the rifle, which was outfitted with a Meprolight reflex sight. Both the rifle and the watch were valued at $3,780.

Mexico's defense secretary gave Mattis a bottle of tequila, a ceremonial sword, and other items.

Sgt. Maj. John Troxell, the enlisted advisor to the Chairman of the Joint Chiefs, got what seems like the entire military gift shop from the government of China.

The listing of stuff given to Troxell from the government of China is rather long: Three coffee mugs, two tie bars, 12 military museum postcards, a DVD, t-shirts, and sunglasses, among many other items. It was all estimated at about $816 in value.