Released on Thursday, the IG report substantiated allegations that Dana White had misused her subordinates for personal services throughout her tenure as assistant to the secretary of defense for public affairs. 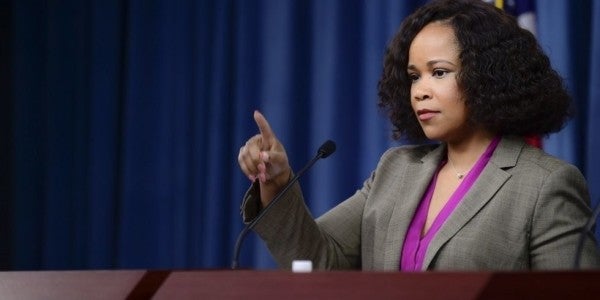 Former Defense Secretary Jim Mattis famously did his own laundry in the Pentagon's basement. His top spokeswoman, meanwhile, was so busy not conducting any press briefings that she had her staff pick up her dry cleaning, lunches and snacks, and schedule personal services, according to a new Pentagon Inspector General report.

Released on Thursday, the IG report substantiated allegations that Dana White had misused her subordinates for personal services throughout her tenure as assistant to the secretary of defense for public affairs.

We found that Ms. White engaged in an overall course of conduct that encouraged, required, or allowed her subordinates to perform numerous services for her that were personal in nature and not related to her subordinates' official duties. The services occurred both during and after official duty hours. These services included making arrangements for her personal travel, obtaining lunch and snacks for her, scheduling makeup appointments at her residence, making an ATM cash withdrawal on her behalf, ordering personal stationery for her, driving her to and from work on a snow day, and dropping off and picking up her dry cleaning.

The report went into a number of things subordinates did for White that fit solely in the personal category, which White claimed were tasks that helped her better carry out her official duties. The IG, meanwhile, broke out that pesky lil' rulebook: “According to the Military Assistant and Executive Office Handbook, the DoD has assigned executive assistants to enable principals to perform their official functions more effectively,” the report said.

“However, the handbook also states that assistants may not plan or coordinate unofficial personal events, or perform unofficial personal tasks, even if doing so would give the principals more time to focus on their official business or may help them overall with their work.”

White's subordinates ended up purchasing train tickets and driving her to work, grabbing her lunch and snacks, filling out her financial and mortgage paperwork, researching an exercise bike for her, and even bought her pantyhose at the Pentagon's CVS Pharmacy.

One of the more interesting parts of the report is when White got pissed at her executive assistant for missing a call from Mattis, because White had sent the assistant to pick up her fucking dry cleaning.

The EA told us that beginning in May 2017, Ms. White requested that he drop off and pick up Ms. White's clothing from the dry cleaners inside the Pentagon on “three to four occasions.”

White denied she ever asked her subordinates to grab her dry cleaning or do other personal tasks.

While noting that perhaps having subordinates pick up lunch on one or two occasions could have been seen as understandable, the IG said that White had “engaged in an overall course of conduct that violated the [Joint Ethics Regulation] when she encouraged, requested, or allowed her subordinates to perform numerous services for her that were personal in nature and not related to their official duties. The services occurred both during and after official duty hours.”

The report is basically the end of the road. White resigned her post in Jan. 2019 and is no longer with the DoD, so there won't be any further personnel action, according to the report. From here, the substantiated allegations just go in her personnel file with the Office of Personnel Management just in case she gets another government job.