Marine Gen. Joseph Dunford, then chairman of the Joint Chiefs of Staff, announced in March that Troxell had been disciplined administratively for violating ethics rules, but the Army Inspector General's Office findings have not been made public until now. 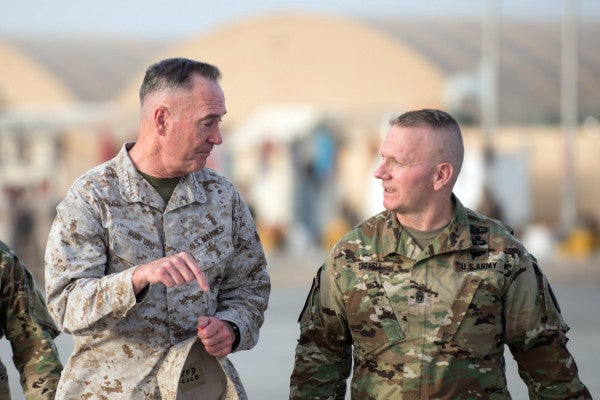 Retired Army Command Sgt. Maj. John W. Troxell “demonstrated a pattern of using his subordinate staff to perform services for his personal convenience” while he served as the senior enlisted advisor to the chairman of the Joint Chiefs of Staff, according to a redacted copy of an Army Inspector General investigation.

“These unofficial duties included the subordinates going to CVS for him, driving after hours during TDY to unofficial events, dining with them, and provided unnecessary support to him and his wife,” according to the investigation, which Task & Purpose obtained through a Freedom of Information Act request.

Troxell also appeared to endorse TRX fitness equipment and FITCRUNCH protein bars in two separate videos posted on the senior enlisted advisor's official Facebook page, the investigation says. He did not receive any compensation from either company.

Marine Gen. Joseph Dunford, then chairman of the Joint Chiefs of Staff, announced in March that Troxell had been disciplined administratively for violating ethics rules, but the Army Inspector General's Office findings have not been made public until now.

Troxell retired in December. He declined to comment on Monday when reached by Task & Purpose.

The former senior enlisted leader told investigators that he sometimes asked his staff to pick up things for him at CVS, but he always gave them money and told them to keep the change.

One subordinate told investigators that when he tried to give Troxell $10 in change, Troxell replied, “No, dude, you are not an indentured servant.”

Even though Troxell compensated the service members who went to the CVS and elsewhere to run errands, that does not change the fact that he asked subordinates to shop for him, the Army Inspector General's Office found.

“Troxell had a responsibility to not use subordinates for unofficial duties, and he failed to do so,” the investigation says.

However, investigators also noted that Troxell did not “directly encourage, direct, coerce, or request” his subordinates to use their time for unofficial duties.

“The subordinates identified and responded to CSM Troxell's implied tasks clearly felt obliged to provide him unofficial support,” the investigation says. “They recognized they were working for the highest ranking NCO in the DOD, they respected him, and they wanted to do their best to help CSM Troxell succeed.”

For example: One of Troxell's subordinates anticipated that Troxell would ask him to pick up his wife so the two could have lunch, the investigation found. The staffer told Troxell that he was on his way to pick her up from her hotel, Troxell replied by giving him a thumb's up – a “tacit approval” of him running the errand, investigators found.

“There was no evidence presented to indicate that Mrs. Troxell was there in an official capacity, therefore any extraordinary service provided to her violated the standard,” the investigation says.

Investigators also found that Troxell violated ethics rules in two videos posted on the senior enlisted advisor's official Facebook page. In the first video, he was dressed in TRX shirt and shorts, exercising on TRX equipment in front of a container with a larger TRX logo.

Troxell told investigators that he only wore the TRX workout gear because it was his last set of clean clothing at the time. He also pointed out that he never mentioned TRX by name during the video.

Still Troxell said he was concerned that the video could appear to show him endorsing TRX, so he monitored the comments made about it, the investigation found. After being viewed 1,500 times, none of the commenters said it appeared as though he was endorsing TRX.

“While CSM Troxell never mentioned TRX by name, the unmistakable presence of TRX material in the video, the apparel worn by CSM Troxell, the signage, and the equipment used present an unmistakable focus on the TRX brand, and implied an endorsement,” the investigation says.

The investigation also found Troxell's decision to post the video and monitor the comments “unwise.” If he was concerned that he appeared to be endorsing TRX, he should have consulted his legal support team before posting the video.

“His assertion that a lack of Facebook comments alleging endorsement carried any weight was flawed,” the investigation says. “A lack of comments did not mean that a viewer did not see the obvious TRX branding, it only meant that they did not comment on it.”

The second video was taken before the Cateran Yomp, a long-distance charity walk in Scotland. Before tackling the march, Troxell said: “We've fueled up on some Robert Irvine FITCRUNCH and are ready to get after it.”

Troxell explained that Irvine had just passed out protein bars to all the participants in the Cateran Yomp and his comments were meant to be a spontaneous expression personal gratitude, not an official endorsement of FIT CRUNCH.

Once again, investigators did not see it that way.

“CSM Troxell's assertion that he was not in uniform in the video was irrelevant as the video appeared on the official SEAC Facebook page and therefore in his official capacity as SEAC,” the investigation says. “His statement implied that Mr. Irvine's product had provided him the 'fuel' he needed to complete the event and was an endorsement of that FITCRUNCH made it possible for him to complete the Yomp.”

Troxell was temporarily reassigned to the vice director of the Joint Staff from September 2018 until March 2019, when Dunford reinstated him as senior enlisted advisor to the chairman.

“I carefully weighed the gravity of CSM Troxell's ethics violations against his 37 years of dedicated military service and superb leadership – to include 19 years as a sergeant major,” Dunford said in a news release at the time. “Appropriate corrective action has been taken and I'm confident that SEAC has learned from this experience. I am equally confident in his competence and capability to continue serving as our senior enlisted leader, which is why I reinstated him to his duties as SEAC. Now it's time to move on and get back to the important work we have before us.”