'Civil war is certainly a path that can be visualized.' 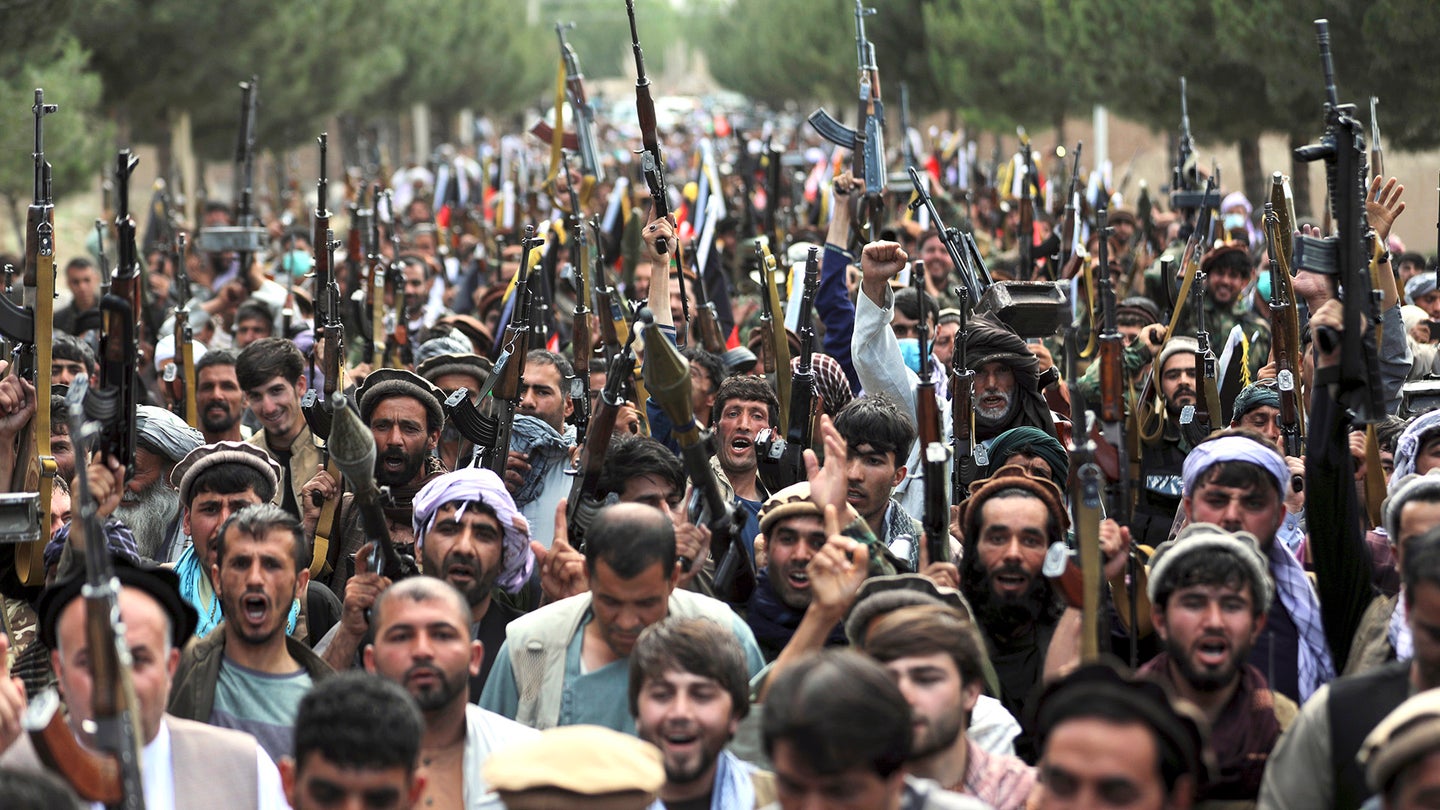 In this June 23, 2021, photo, Afghan militiamen join Afghan defense and security forces during a gathering in Kabul, Afghanistan. U.S. officials tell The Associated Press that about 650 U.S. troops are expected to be kept in Afghanistan to provide security for the American diplomatic presence after the Pentagon completes its military withdrawal, which is set to be largely done in the next two weeks. (AP Photo/Rahmat Gul).
SHARE

With most U.S. troops gone from Afghanistan, the Taliban controls much of the country and its power is only growing.

“D’Agata has covered the war in Afghanistan for years, and he’s been to the front line many times,” CBS News reported. “But while getting to the fight from Kabul used to mean hitching a ride on a helicopter, for this visit, it was just a drive into the mountains right outside the capital city.”

The momentum has shifted so quickly and decisively against the Kabul government that one Taliban commander told NBC News that he has actually slowed the offensive to avoid capturing any provinces or provincial capitals before September, when the U.S. withdrawal is expected to be complete.

There is no hiding the fact that Afghanistan is collapsing in real time and as a result the country will look remarkably similar to how it appeared on Sept. 11, 2001. The outgoing commander of all U.S. and NATO troops in Afghanistan offered a grim prognosis for the country going forward.

“Civil war is certainly a path that can be visualized if it continues on the trajectory it’s on,” Army Gen. Austin Miller said during a press conference on Tuesday. “That should be a concern for the world.”

So far, U.S. military officials have not said whether the withdrawal could be completed in July, as has been widely reported, or how many American troops will remain in Kabul to protect the U.S. embassy there; media reports have put that figure at anywhere between 650 and 1,000 service members.

White House spokeswoman Jen Psaki was asked on Wednesday if the United States would commit to evacuating all Afghan interpreters before the troop withdrawal is completed.

Psaki said the U.S. government is focused on accelerating the application process for Afghans who have applied for Special Immigrant Visas. She noted that on June 25, the administration announced that Afghans and their families who are waiting for such visas would be moved to another location.

“In terms of the numbers or what that looks like, those operational components are still being worked through,” Psaki told reporters at a White House news conference.

“I would also note, though, that we will still have a diplomatic presence on the ground,” she continued. “That is our continued commitment and that will continue after September.”

That’s assuming, of course, that the United States maintains its embassy in Kabul. Should the capital fall to the Taliban, the scene could resemble America’s hasty departure from Saigon and Phnom Penh in 1975.

This is not the scenario that President Joe Biden predicted when he announced the U.S. military’s withdrawal from Afghanistan on April 14.

“Along with our partners, we have trained and equipped a standing force of over 300,000 Afghan personnel today and hundreds of thousands over the past two decades,” Biden said.  “And they’ll continue to fight valiantly, on behalf of the Afghans, at great cost.”

But the U.S. intelligence community has estimated that the Afghan government could collapse six months after the American military withdrawal is complete, the Wall Street Journal recently revealed.

On Wednesday, Psaki acknowledged that the intelligence community has made assessments about the conditions on the ground in Afghanistan, but she did not specify what conclusions U.S. officials have drawn.

“We are going to continue to work with leaders in Afghanistan, as the president reaffirmed last Friday, but it’s not changing our plans or our timeline for removing our troops.”

Retired Army Gen. David Petraeus, who led all U.S. and Coalition troops in both Afghanistan and Iraq, and who also commanded US Central Command, called the Taliban’s gains over the past two months “alarming” but he does not believe the Taliban will have total control over most of the country by the time most American troops leave.

It is unlikely that the Taliban will capture Kabul, Herat, Mazar-i-Sharif, and several other areas by September, Petraeus told Task & Purpose, though he noted that much depends on what the United States does to ensure the operational readiness of the Afghan Air Force, which is the key element to the ability of Afghan forces to respond with quick reaction forces and reinforcements and also for Afghan provision of close air support.

“Will it be much more dire than it is now? Yes, I fear it will be, unless the U.S. helps Afghanistan develop and execute a plan to stabilize the situation” Petraeus said. “It will certainly be more dire than at any time since the defeat of the Taliban and elimination of the Al Qaeda sanctuary in which the 9/11 attacks were planned.”

The most important factor that will determine if the Afghan government can survive is what the United States will do going forward, Petraeus said.

“Is the U.S. truly going to step back and allow Afghans – i.e., especially the Taliban and its associated elements – to determine the future of the country, even if those Afghans are willing to harbor extremists as they did in the past?” Petraeus asked.