Afghan President Ashraf Ghani and the country's chief executive, Abdullah Abdullah, have both claimed victory in a weekend presidential election, a scene reminiscent of the last vote in 2014 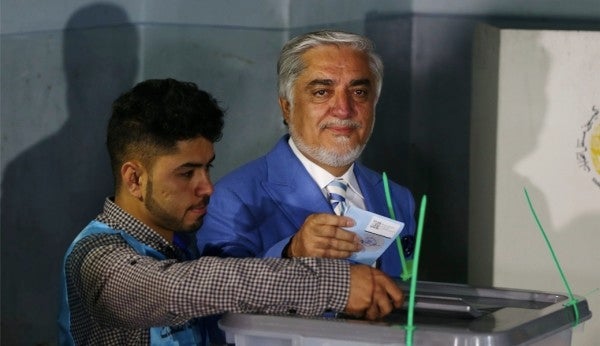 Afghan President Ashraf Ghani and the country's chief executive, Abdullah Abdullah, have both claimed victory in a weekend presidential election, a scene reminiscent of the last vote in 2014.

Though preliminary overall results aren't expected for another three weeks, Abdullah told a news conference in Kabul on September 30 that by his count, he won such a clear-cut victory in the balloting that a second-round runoff won't be needed.

That followed a claim by Ghani's running mate, Amrullah Saleh, that the incumbent had won a clear first-ballot victory.

“The information that we have received shows that 60 to 70 percent of people voted us,” Saleh was quoted by Voice of America as saying.

Neither side offered any evidence to back up their claims, raising concerns that the war-torn country is headed for a similar situation that arose from the 2014 election, where the same two candidates made competing claims of victory.

That led to months of turmoil that was ultimately settled through a power-sharing deal brokered by the United States that brought a deeply unpopular and fractured national-unity government to power.

“The situation in 2014 was different. We were the winning team at that time,” Abdullah said on September 30.

“Now it is 2019 and I have announced, and I am reiterating, that only legal votes will be accepted by us,” he added.

Fifteen candidates were on the ballot in the September 28 election, but the contest was widely seen as a two-horse race between Abdullah, 59, and Ghani, 70.

In a statement on September 30, EU foreign-policy chief Federica Mogherini called on the candidates to respect the electoral timeline.

“We expect that the candidates exercise restraint, await the official announcement of preliminary and final results by [Afghanistan's Independent Election Commission, IEC] and submit any evidence-based complaints through the established institutional complaints mechanism,” Mogherini said.

Around 9.6 million Afghans were registered to vote in the election, the fourth presidential vote since the U.S.-led invasion toppled the Taliban in 2001.

The IEC said late on September 29 that it had counted more than 1.1 million votes in the election, which was marred by a spate of militant attacks across the country and reports of problems at polling stations.

The commission has said that an unofficial estimate of voter turnout in the election shows that a little more than 2 million voters cast ballots — a sharp drop from the roughly 7 million who turned out for the last presidential election in 2014.