Back To Afghanistan: Looking At The Ghazni That Exists Now Vs. The Town I Knew

My husband, Russ, is headed back to Afghanistan this fall. “The Taliban are probably sleeping in the same rooms we... 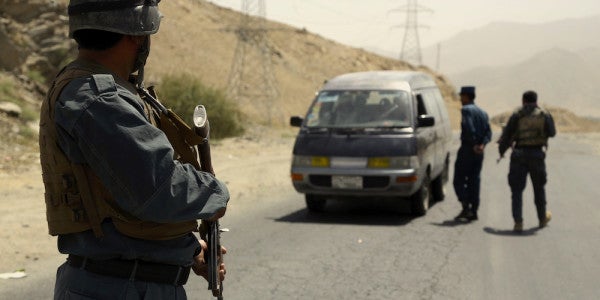 My husband, Russ, is headed back to Afghanistan this fall. “The Taliban are probably sleeping in the same rooms we used to sleep in,” he noted as we discussed his upcoming deployment and therecent news of the Battle of Ghazni the other day.

Ghazni is where Russ and I first got to know one another nine years ago, both of us junior Army officers and partners in our regular Spades game against the commander and his deputy on boring winter nights on a FOB just outside of Ghazni City. Though finally pushed out of the city after five days of fighting, the Taliban still hold sway in many areas of this strategically significant southeastern province and much of Afghanistan's only highway.

There is no Provincial Reconstruction Team, like the unit Russ and I were assigned to, anymore — not in Ghazni or anywhere in Afghanistan or Iraq. By most accounts, PRTs were a failed yet expensive pursuit of hearts and minds. Our main task was not to kick in doors, to destroy things, but to build things. Or, to divvy up monies meant to go toward the building of things. Together with our embedded USAID and State Department Reps, we traveled the whole of the vast province, meeting with tribal leaders and local doctors and provincial governors, asking them how we could help build a school, a clinic, a road.

We did build some of those things, but I don't think any of us ever believed they'd last long.

The author in GhazniCourtesy photo

One of the PRT’s other key missions was to support local officials before and during Afghanistan’s 2009 presidential election–the country’s first ratifying their new constitution in 2004. Our job was to provide security for the election officials, the voters, and the ballots.

For me, the mission was a front row seat to an awe-inspiring attempt at democracy. I was not too awe-inspired, however, to refrain from swiping one of the blank ballots to keep as a souvenir.

The ballot itself, which I keep in one of my old tuff boxes, is a lovely artifact. It’s a long piece of paper, much longer than a legal pad, with a bright green border. It displays the two dozen or so candidates’ photos, and an icon next to each, for voters who can’t read or don’t know the candidates by name. The icon is meant to represent a candidate’s platform, main trade affiliation, or another identifier. One icon is an apple, another, a goat. (Think: Trump’s face next to the Koch Industries logo, Bernie’s next to, say, the Phish logo.)

One of our interpreters from back in ‘09–one of the lucky ones who was able to get his visa approved and now lives in the U.S.–posted recently on Facebook:

“So worrying about my families in #Ghazni. My Dad came from village to Ghazni city to buy solar panel and now trapped in war zone. President Ghani and his CEO are horrible and so WEAK. #Afgexcutive #ashrafghani.”

The two women interpreters we worked with–a midwife with two little girls, and her assistant–never did get their visas approved.

Looking at my stolen ballot from nine years ago, I feel a tinge of nostalgia (oddly enough), and I wonder about those brave people in Ghazni who lined up to vote that year. Amid Taliban threat, they lined up, inked their thumbs, and placed their marks next to those faces and their icons. A car, an open book, a flower.

In 2014, Afghanistan’s voter turnout was 58 percent, so high that some polling stations ran out of ballots. (America’s turnout in 2016 was 55 percent.)

Russ’s next tour should overlap with Afghanistan’s 2019 presidential election, but as the situation seems to erode more and more, it is harder and harder to imagine people lining up to vote in it. It’s hard to imagine anything we helped build nine years ago surviving much longer.

Joanna (Jo) Dasher is a writer and editor in Atlanta. After graduating from West Point with a bachelor’s degree in political science in 2006, she served for five years in the active-duty Army, including two combat tours in Afghanistan as an ordnance platoon leader and on a provincial reconstruction team in Ghazni province. She separated from the Army in 2011 as a captain. Follow her on Twitter @jojodasher