A Team Of ISIS Militants Accidentally Blew Themselves Up In Afghanistan

Roughly a dozen Islamic State militants accidentally blew themselves up and injured 21 other militants in Nangarhar province, Afghanistan, on... 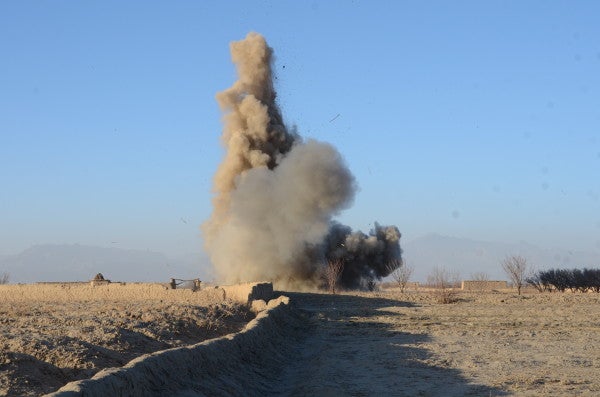 Roughly a dozen Islamic State militants accidentally blew themselves up and injured 21 other militants in Nangarhar province, Afghanistan, on March 13, during a failed attempt to plant a roadside bomb, reports Phillip Walter Wellman of Stars and Stripes.

According to Attaullah Khogyani, a spokesman for Nangarhar province’s provincial governor, “they were attempting to move an IED (improvised explosive device) to a crowded area of Achin, but it went off before they reached the planned place.”

A statement from Afghanistan’s Ministry of Defense said the militants were attempting to transport the device from the Mazdaki area of Achin District near the Pakistani border, to Shedil Bazar, in the same district, when it detonated prematurely, reports the Khaama Press in Afghanistan.

Related: An inside look at the next stage of the war against ISIS »

There were no civilian casualties reported.

The Islamic State’s presence in Afghanistan has faced strong resistance from both security forces and the Taliban, with most of its estimated 1,000 – 3,000 members believed to be former Taliban fighters.

Following an Islamic State attack on the Pakistani consulate in the Jalalabad, Pakistan, on Jan.14, President Barack Obama gave U.S. commanders the authority to strike Islamic State targets inside of Afghanistan, reports the Washington Post.

Since that time, the U.S. has increased its air strikes in Afghanistan, with U.S. warplanes engaging enemy forces 128 times in January 2016. Roughly 20 air strikes were directed at Islamic State targets in late January and early February of this year, Reuters reports.