A two-month investigation into a U.S. military airstrike in Iraq that caused some of the worst civilian casualties in decades... 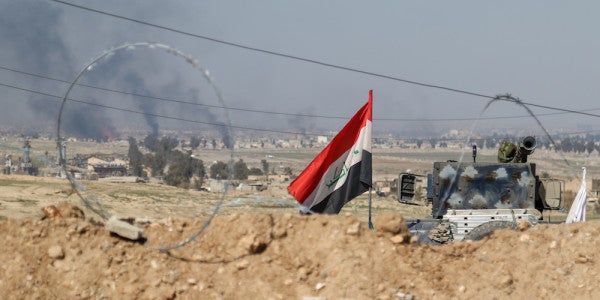 A two-month investigation into a U.S. military airstrike in Iraq that caused some of the worst civilian casualties in decades found that the attack inadvertently set off explosives that gutted a sprawling apartment block and killed at least 105 civilians — far fewer than survivors and other witnesses have claimed.

Residents have insisted that several hundred people died. Iraqi civil defense forces initially put the figure at 278 but scaled that back to 142 on Thursday, after the U.S. report was released.

The deadly March 17 incident in Jadidah, a densely populated neighborhood in the war-torn Iraqi city of Mosul, garnered worldwide attention after photos of smoldering rubble mixed with lifeless bodies rippled across social media.

The Pentagon said military investigators, led by U.S. Air Force Brig. Gen. Matthew Isler, twice visited the site of the airstrike, spoke to witnesses and pored through more than 700 videos taken from coalition warplanes over a 10-day period before, during and after the airstrike.

According to the Pentagon account released Thursday, a U.S. military warplane dropped a 500-pound GPS-guided bomb on two Islamic State fighters firing on Iraqi forces from the roof of a building in Jadidah. The investigation said the GBU-38 bomb should have killed the pair and maintained the structural integrity of the two-story building, which was constructed of reinforced concrete and had 30-inch walls at points.

Instead, a massive explosion ripped through the neighborhood, reducing the apartment block to flaming wreckage, twisted rebar and a tomb for innocent civilians.

The investigation said 101 bodies were found in a main building, and four others were killed in a nearby building.

The Pentagon released an “executive summary” of the investigation, called a 15-6. The full report, which likely includes hundreds of documents, is classified.

Isler told reporters at the Pentagon via teleconference from Randolph Air Force Base in Texas that the massive blast was caused by explosives planted by the Islamic State.

“No one saw ISIS move explosives into that area,” he said, using an acronym for the terrorist group. “However, there were multiple opportunities for that to happen, so we did not rule that out.”

Investigators came to the conclusion that the militants planted the explosives, he said, because the chemical residue left behind was different from those found within the GBU-38. They said the size of the blast suggested there was four times as much explosive material as contained in the U.S. bomb. A GBU-38 has a 192-pound warhead.

“The secondary explosion caused a rapid failure of the structure,” Isler said.

The civilians were found in the basement, sheltering from the battle raging outside, Isler said, while the explosives were put on the second floor. Isler said the Islamic State intentionally lured the airstrike knowing civilians were in the building and knowing the planted explosives likely would bring the structure down.

The airstrike was delivered by a U.S. aircraft after Iraqi forces, taking fire from the two snipers, called it in. Iraqi counterterrorism service members were watching the building for two days and saw no sign of civilians inside, Isler said.

U.S. reconnaissance aircraft were overhead watching the facility but also did not see the civilians, Isler said. However, the spy planes could not watch the building in the two days preceding the strike because of bad weather, he added.

“The coalition takes responsibility for the strike,” Isler said.

Mosul resident Khalid Zakhi, who survived the attack but whose wife and son were killed, said he was encouraged by the report.

“For the coalition and America to hold themselves responsible for the airstrike is a good sign, and we would like for them to look after those who lost their loved ones,” said Zakhi, 51, a Mosul University worker. He asked that the coalition “help those whose homes were damaged by rebuilding … so they will be able to return to their homes.”

He said that most families left homeless by the blast are faring poorly because they have nothing to live on.

Mohamed Danoon Jasim, whose relatives also were killed, said the acknowledgment by the U.S. is “not going to change anything on the ground and will not give us anything.”

“Imagine you lost more than 20 members of your family, and the murderer comes to you and says, ‘I am sorry.’ That is not acceptable,” he said. “If they compensate families, it will be better.”

The coalition does not usually compensate civilians for accidental strikes, with the exception of occasional sympathy payments.

Amnesty International issued a statement saying it welcomed the U.S. report, but questioned “whether any lessons were learned and what steps were taken to ensure such horrors do not occur again.”

“We are in no position at this stage to confirm or deny the results of the U.S. investigation,” said Samah Hadid, the group’s Middle East deputy director of campaigns. “But as long as the conflict in Iraq is still raging, we call on Iraqi and U.S.-led coalition forces to desist from using explosive weapons with wide area effects, including artillery and mortars in crowded residential areas and to take all feasible precautions to avoid civilian casualties.”

As a result of the airstrike, U.S. investigators recommended in the report that the Pentagon intensify the way it investigates whether its daily bombing runs over Iraq and Syria are inadvertently killing civilians.

The report also advocated that the two-person team investigating civilian casualties for the U.S.-led coalition fighting Islamic State extremists be expanded and that teams of investigators begin visiting the sites where residents say civilians have been injured and killed by airstrikes.

Under the existing system, the coalition investigates civilian casualties based on reports from its staff, the news media, social media, and local and international monitoring groups. Investigators are not required to visit the scene of strikes, speak with victims or other witnesses.

The U.S. military says 352 civilians have been killed in airstrikes by the coalition since the air war against the Islamic State was launched in August 2014 — still far fewer than independent monitor Airwars’ estimate of 3,294.