How Much Did We Actually Achieve By Dropping The MOAB In Afghanistan?

When the U.S. military dropped the GBU-43, known as the MOAB — short for Massive Ordnance Air Blast, or it’s... 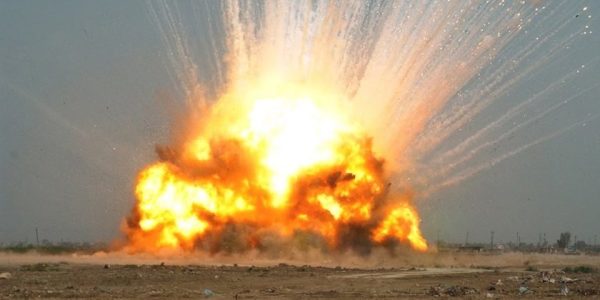 When the U.S. military dropped the GBU-43, known as the MOAB — short for Massive Ordnance Air Blast, or it’s more grabby nickname, the mother of all bombs — on a network of tunnels belonging to Islamic State militants in Afghanistan, it made headlines the world over. Reports of the April 13 strike in Nangarhar province in Afghanistan ran on every major outlet — some set to the uber-patriotic song stylings of Toby Keith, underscoring the bomb’s role as both a tactical asset and a propaganda tool.

But the psychological impact of a strike drops off if nobody knows about the damage it inflicts. A recent report from Alcis, an institute for geographical analysis, which surveyed the targeted area, casts some doubt on the scope and devastation wrought by the MOAB in Nangarhar.

An 11-ton cannister packed to the brim with a highly stable H6 explosive material, the MOAB sends out a massive shockwave when it detonates, making it perfect for the target it was used against — a labyrinth of tunnels with winding corridors concealing militants from the reach of traditional bunker-busting ordnance, notes Wired. But you can’t outrun a torrent of fire and concussive force that winds its way around corners.

Aside from making a pretty big boom, the MOAB makes an equally profound statement, writes Wired’s Emily Dreyfuss — who spoke with a national security official, under the condition of anonymity, about the psychological impact of dropping the mother of all bombs.

“This time, the MOAB served its best strategic purpose — though that may extend beyond the actual impact. Dropping the mother of all bombs also sends a message ‘to the Taliban that there’s a new sheriff in town,’ says the national security official. Presumably also to ISIS, North Korea, and Iran. And the fact that it’s such a big blast doesn’t hurt for courting media attention that helps deliver that warning.

However, if the MOAB failed to rack up the ISIS body count suggested by Afghan military officials, that message could have an adverse effect.

Using satellite imagery, Alcis found that 38 buildings and 69 trees within a 150-meter radius were destroyed, which conflicts with statements from local officials who told reporters on the ground that houses miles away were impacted, according to The Guardian. Additionally, the reports from Afghan government officials that the 94 ISIS fighters were killed in the blast have been greeted with some skepticism, due to the fact that access to the blast site has been severely limited, with local officials and civilian reporters barred from entering.

The U.S. military has also refrained from putting out a casualty estimate, with everyone from Secretary of Defense James Mattis, to military spokesmen more or less saying: We’re not going to go in and dig out the bodies of dead ISIS militants.

To date, no claims of civilian casualties have emerged, but it’s hard to know the full scope of the MOAB strike with information on the bomb’s impact relatively restricted. That raises an intriguing question: If we went through the trouble to drop a MOAB — for the first time in combat — in order to make a statement and deter our enemies, why not provide evidence showing it actually, you know, killed the intended targets?