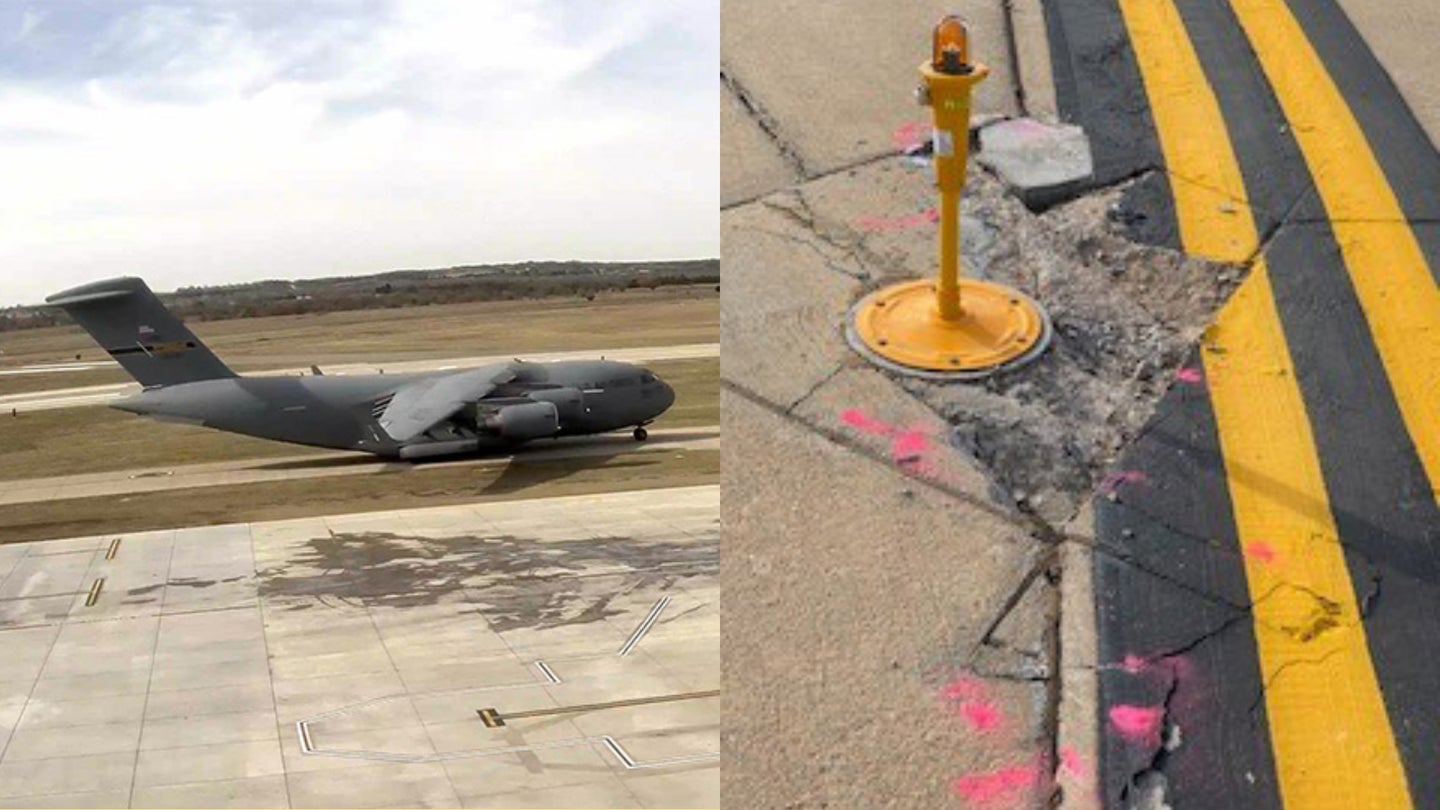 A regional airport in Oklahoma claims that an Air Force C-17 transport jet damaged its runway due to its immense weight.

Airport runways vary in weight limits, and the Stillwater Regional Airport’s 310,000 pound maximum load for dual tandem-wheeled aircraft was about 45 tons below the weight of the 400,000 pound jet when it landed there without permission on Sunday, the city claimed in a press release on Wednesday.

“Airport staff have temporarily patched surface damage to the runway and taxiways but must have the sub-surface assessed for potential long-term damage,” the city wrote.

Stillwater claimed that the C-17 crew had not requested permission to land at the airfield when it touched down on Sunday carrying the U.S. Air Force Academy women’s basketball team for a Tuesday game against Oklahoma State University. Charter flights need to receive permission so that the airfield can prepare the appropriate safety and firefighting equipment, but in this case “prior approval was neither requested nor granted by airport administration,” the city said.

However, the 911th Airlift Wing, the unit to which the C-17 is assigned, pushed back on Stillwater’s claim, saying that the crew had coordinated with the airport beforehand and that the aircraft was within the runway’s weight limits for triple-tandem aircraft.

“Internal Air Force reports indicate that the aircraft was within weight limits of triple-tandem landing gear and that the flight was coordinated with airport officials five days prior to landing,” as part of a pre-coordinated training mission, the wing’s public affairs chief, 2nd. Lt. Marjorie Schurr, told Task & Purpose. “911th AW pilots are well trained in operating procedures for the C-17 Globemaster III.”

Schurr added that the airport reported damage to the runway and taxi surfaces after the plane took off, though the actual cause of the damage is still unknown.

It may be surprising to hear that not all runways are strong enough to take on certain aircraft, but it’s true. Building runways is an expensive project, and building a strip that can carry a heavy jet like a C-17 or a Boeing 747 costs more than a smaller one, especially when you consider that it takes even more money to maintain those facilities over the years.

The weight of an aircraft also affects the design of its landing gear, as manufacturers seek to spread out the burden onto more wheels for the sake of both the aircraft and the surface it is landing on.

Naming conventions for aircraft landing gear configuration may sound like a snooze-fest, but it is one of many details that Air Force transport jet pilots have to be mindful of when considering where to set down their mighty and expensive steeds. ’TRT’ is the shorthand for the twin-tandem, tricycle wheels used on the C-17, according to the Federal Aviation Administration.

“When flying to a field, the crew is supposed to check the TRT weight limits for the runways, taxiway and ramp they plan to use,” an anonymous C-17 pilot told Task & Purpose. “It’s important to check everything because the runway may allow your planned weight, but a section of taxiway may not. Crews are expected to adjust accordingly.”

A C-17 crew could operate at a field above the weight limit if they get permission from the airfield manager, the pilot explained, but that is rare outside of emergencies since too-heavy jets will wear out the pavement faster.

“The reason for the different weigh limits around an airport is money and expected use,” the pilot said. “You pour concrete or asphalt different for your international ramp versus where the Cessnas park. There is no need for a small regional airport to rate their hard surfaces for a 747 if they just expect light commuter jet traffic.”

Checking the weight limit and acquiring prior permission to land are basic procedures in Air Force flying, and it would have been “a big screw-up” if the crew had not done their due diligence beforehand, the pilot explained. However, “I don’t believe the crew is at fault if public affairs is saying they are in the clear,” he added.

Air Force C-17 crews are trained to take weight limits seriously, but they can land in sketchy places if the mission requires it. In fact, airmen routinely touch down on ice runways in Antarctica, where the Air Force flies resupply missions for National Science Foundation researchers as part of Operation Deep Freeze. Simply finding the runway is a challenge at the bottom of the world.

“It’s white behind white behind white,” a C-17 pilot named Lt. Col. Jason Taylor said in a 2012 Air Force press release. “There is not nearly as much contrast between the runway and its surroundings as there is with a traditional runway.”

The runway itself is carved into seasonal sea ice, which makes it essentially a floating runway, the press release said.

“If you smack down hard on it like a paved runway, it can create waves in the ice and crack,” Taylor explained.

Despite its size, the C-17 can land on runways as short as 3,500 feet or on a dirt landing strip, though it kicks up quite a bit of earth in the process.

“It’s quite a spectacular site to see this huge cloud of dust chasing you when you’re taking off, and then the same thing happening when you’re landing — a dust cloud chasing you as you come to a stop,” Gus Christou, a mechanical subsystems engineer said in a 2006 Air Force press release.

Of course, those capabilities don’t change the fact that Stillwater Regional Airport has “significant” damage in its runway that someone is going to have to pay for. It is unclear at this point how badly the facility needs fixing.

“Because the airfield pavement consists of multiple levels, potential damage can be feet beneath the surface and not be evident at the surface for years,” the city said. “Tools like ground-penetrating radar may need to be deployed to gain a better understanding of what lies beneath the surface.”