In all fairness, it is a great game. 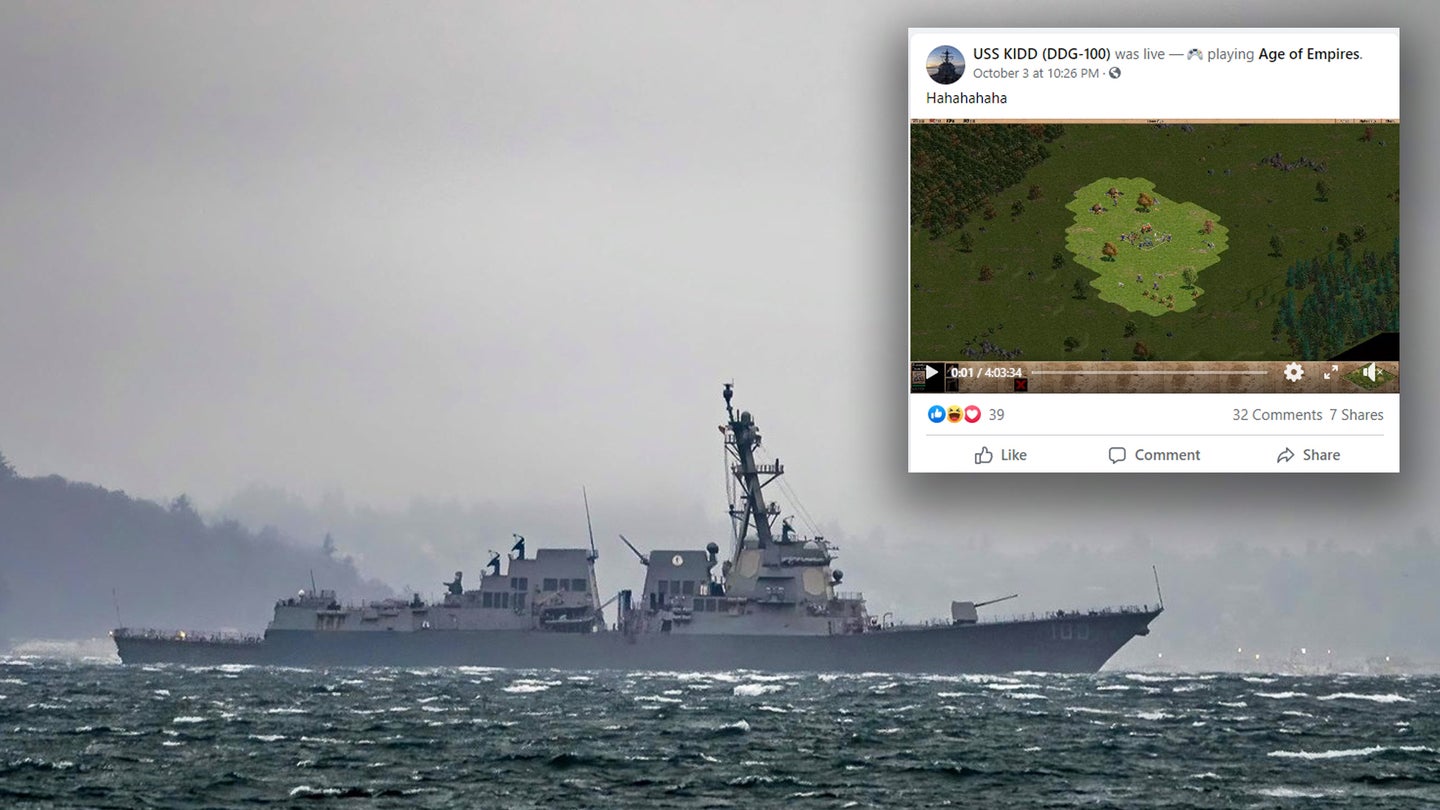 The official Facebook page for the USS KIDD (DDG-100) appears to have been hijacked by someone who really just wants to play "Age of Empires".
SHARE

For the last several days, someone has been having a lot of fun playing the classic 1997 strategy game “Age of Empires.” Normally, that wouldn’t be news (the game is freaking fantastic) but in this case someone has been livestreaming their game sessions on the official Facebook account for the USS Kidd, and the U.S. Navy still hasn’t regained control of their account.

“The official Facebook page for USS Kidd (DDG 100) was hacked,” Cmdr. Nicole Schwegman, a Navy spokesperson told Task & Purpose on Tuesday. “We are currently working with Facebook technical support to resolve the issue.”

As of Thursday morning the videos still remain up on the official account for the Arleigh Burke-class destroyer. Whoever took control of the page also went so far as to change the account type to: “Gaming Video Creator.”

After publication, Schwegman told Task & Purpose on Thursday that the account’s “access has been secured by Facebook, and once their procedures are complete we’ll regain access to the page.”

When asked specifically about whether the account was “hacked,” and how that happened, Schwegman said that the “USS Kidd’s Facebook page had an unauthorized access from an unknown entity.”

The first livestream appeared on the USS Kidd’s Facebook account on Sunday at 10:26 p.m. with the gleeful caption: “Hahahaha.”

That was quickly followed by another stream at 2:37 a.m. on Monday with the words “play game,” then another two hours later that included the message “hi everyone.” And it continued: At 6:17 a.m. a stream was shared with the words “hi guys” then “fffffffffffff” an hour later, and finally “POSC” at 8:51 a.m. on Oct. 4, marking the last video.

The comments to the videos from the account’s 19,000 followers were sparse, and largely amounted to questions about who’s son or daughter was going on a gaming spree, followed by assertions that the account was hacked, and then some internet-guesswork suggesting that if it was hacked, that the Navy likely would have reacted more quickly to resolve the issue, since that might indicate a security breach. (With regards to the speculation online, it’s worth noting that people sometimes use the word “hacked” as a sort of shorthand for: We, uh, forgot to log out of our account.)

In any case, this is hardly the first time that an official military social media account has gone off the rails, though in defense of the USS Kidd’s rogue gamer, their multi-day binge of “Age of Empires” is far less controversial than some.

After the base’s public affairs office initially claimed that their account had been hacked and then temporarily deleted said account, it came to light that the whole ordeal had actually just been a mistake by a social media manager who appeared to have forgotten to switch from their professional account to their personal one before, you know, doing all that.

For the time being, the videos on the USS Kidd’s account are still up. And honestly, this seems like a good opportunity to jump in there and give that player some pointers because these videos are each about an hour long and they still haven’t figured out how to advance past the Stone Age.

Update: This article has been updated with additional information from the Navy about the USS Kidd’s Facebook page.