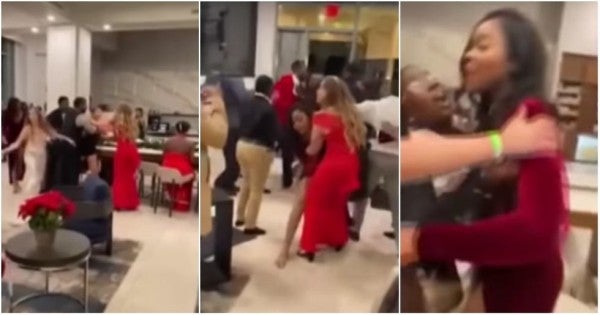 Moore was found guilty of being drunk in public at a Jan. 8 hearing and paid a total of $94 in costs, court records show.

Moore enlisted in the Navy in August 2017, according to the sailors' biographies, which were provided by the Navy. Carradine-McMillan enlisted in November 2017; Jackson has served with the Navy since August 2015 and his awards include the Sea Service Deployment Ribbon.

Officials have not said what caused the fight, which occurred in a hotel lobby during a holiday party. A two-and-a-half minute cell phone video of the incident that was uploaded to YouTube appears to show at least two women involved in a melee as several others tried to separate the combatants.

The fight broke out just after midnight on Dec. 17, according to a Norfolk Police Department report.

A police officer had escorted a man being disorderly out of a hotel lobby to prevent a fight from breaking out, but when he returned inside another brawl was taking place, the report says.

Carradine-McMillian is accused of hitting a man who was holding another woman and then shoving a plain clothes detective, who tried to break up the fight, the report says.

“She failed to comply and disregarded every command of stop resisting as she was trying to break free from our control,” the report says. “She was later handcuffed and arrested for disorderly conduct.”

A command investigation is looking into what transpired, said Navy Cmdr. Jennifer Cragg, a spokeswoman for Naval Air Force Atlantic.

Cragg declined to say how many sailors are being investigated or if any of the Eisenhower's crew have been charged under the Uniform Code of Military Justice or disciplined administratively, saying it would be “inappropriate to speculate” about the investigation's outcome.

“Neither the United States Navy nor the USS Dwight D. Eisenhower condone this type of behavior,” Cragg told Task & Purpose. “We require our Sailors to maintain military bearing on and off duty at all times.”

All of the three sailors charged declined to comment through their spokesperson, Cragg said.