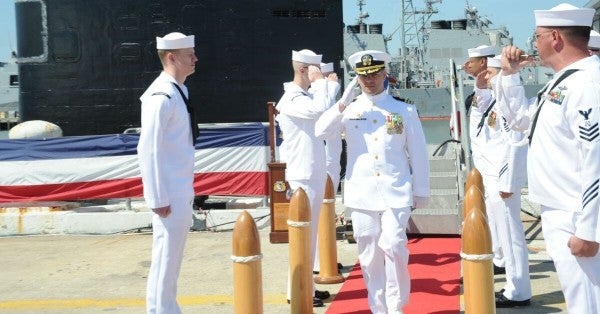 The former commanding officer of the USS Montpelier pleaded guilty in December to charges stemming from an inappropriate relationship with the spouse of an enlisted subordinate, according to the Navy's report of trial results.

Cmdr. William B. Swanbeck, who was relieved of command of the fast-attack submarine in June 2018 due to “a loss of confidence in his ability to command,” pleaded guilty at a special court martial to conduct unbecoming an officer and a gentleman as part of a pretrial agreement for engaging in the inappropriate relationship.

Swanbeck was sentenced on Dec. 4 to a reprimand and the forfeiture of $1,500 pay per month for 11 months, the trial results said. Since his relief, Swanbeck has served as a special assistant to the commanding officer of the naval base in Groton, Connecticut, according to his LinkedIn account.

Swanbeck “is still technically assigned to the Montpelier although he was removed from the submarine after he was relieved of command,” Cmdr. Jodie Cornell, a spokeswoman for Navy Submarine Forces, told Task & Purpose on Monday. “He will remain temporarily assigned to the squadron until all administrative processes are complete.”

At the time of his firing, Navy officials did not provide anything more than a “loss of confidence” as reason for the dismissal, although a spokeswoman confirmed to Navy Times he was under investigation for allegations of “personal misconduct.”

A native of Huron, Ohio, Swanbeck is a Naval Academy graduate who commissioned in 1999. He served aboard a number of submarines throughout his career and assumed command of the Montpelier in April 2016. The sub, named for the city of Montpelier, Vermont, is crewed by 15 officers and 129 enlisted members, according to a Navy press release.