A Navy SEAL Team 6 operator has been found guilty at court martial of trying to trick a woman into... 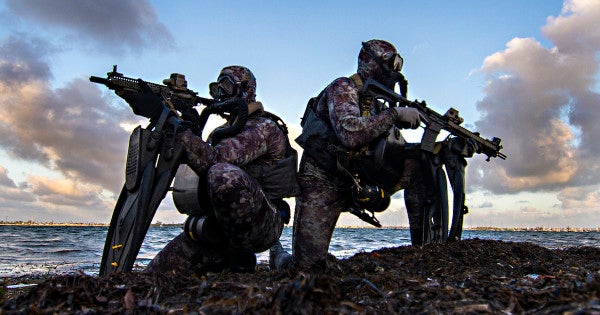 A Navy SEAL Team 6 operator has been found guilty at court martial of trying to trick a woman into sending him nude photos.

Special Warfare Operator 1st Class Aaron Howard was sentenced to 30 days in the brig, reduction in rank to petty officer second class, and a loss of $500 pay each month for three months, according to Navy Times, which first reported on the verdict.

Military prosecutors accused Howard of pretending to be someone else by “spoofing” phone numbers to text-message victims and request nude photos under false pretenses.

Lt. Kirwinn Mike, a Navy prosecutor, claimed Howard had in one incident pretended to be a female performance dietitian who was assigned to SEAL Team 6, The Virginian-Pilot reported. According to Mike, Howard texted a woman that he could provide a body-fat analysis if she sent a photo of herself naked from the neck down.

Howard was accused of soliciting nude photos from two civilians and a female sailor. Charges involving the female sailor were later dropped and the jury found Howard not guilty of charges related to one of the civilians.

Investigators with the Naval Criminal Investigative Service said they were able to trace the internet address of the text messaging apps used to Howard's home address, according to The Virginian-Beach Pilot. But Howard's attorneys argued that their client was wrongfully accused, and the text messages could've come from anywhere.

According to Navy Times:

Howard's military defense counsel, Marine Capt. Douglas Germano, said the prosecution sought a sentence of 18 months behind bars and a dishonorable discharge. Germano said he was glad that the jury recognized Howard's service to his country by delivering a verdict that will allow him to seek a medical retirement.

Reading a prepared statement before his sentencing, Howard, 34, indicated that he needed medical care for the hidden wounds of war, including Post-Traumatic Stress Disorder, hearing loss and traumatic brain injury.

Michael Waddington, Howard's civilian attorney, told Task & Purpose in an email that he plans to “vigorously” appeal the case, since, he claimed, “the Navy grossly violated his due process rights throughout, all but guaranteeing a conviction.”

The Navy did not immediately respond to a request for comment.