"While this incident is currently being investigated, the United States Navy does not condone this type of behavior." 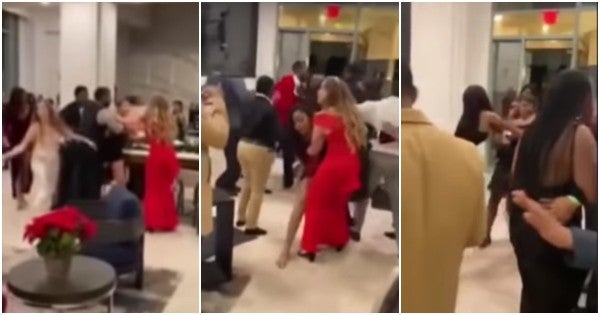 The Navy is investigating a video that surfaced on Friday which allegedly show sailors from the USS Dwight D. Eisenhower fighting during a holiday party.

The two-and-a-half minute video, which appears to have been shot on a cell phone in a hotel lobby, shows two women shouting at and striking each other.

Police and bystanders step in to break up the fight, and one of the women is pushed away by another women who can be heard saying “it's not worth it” before someone else throws a chair across the room.

Brawl Breaks Out at Christmas Party

The Navy has expressed disapproval of the behavior on display in the video.

“While this incident is currently being investigated, the United States Navy does not condone this type of behavior,” Cmdr. Jennifer Cragg, force public affairs officer for Naval Air Force Atlantic, said in a statement sent to Task & Purpose. “These alleged actions are not indicative of the greater Navy community or the thousands of men and women currently serving on board the Nimitz-class aircraft carrier USS Dwight D. Eisenhower (CVN 69).”