The football rivalry between the Army’s Black Knights and Navy’s Midshipmen teams has come a long way from brutal brawls... 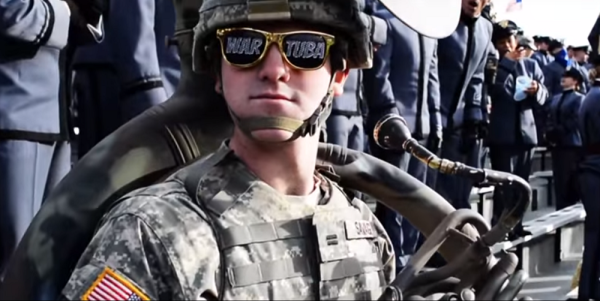 The football rivalry between the Army’s Black Knights and Navy’s Midshipmen teams has come a long way from brutal brawls on the field to where it is now, with the two teams trolling each other with pre-game movie spoofs.

The most recent video, published on West Point’s YouTube page on Dec. 1, is deliberately overdramatized and reminiscent of the blockbuster film “Zero Dark Thirty.” Written and produced by Cadet Austin Lachance, the video, “On Brave Old Army Team,” takes its name from the academy’s official fight song.

The clip opens with the West Point’s mascot, a Mule, interrogating a Navy student as he attempts to discern the whereabouts of target number one: the Naval Academy’s Bill the Goat.

Why go after an opposing team's mascot? Because as the video points out: “Victory lies in the battle of the spirits. Period.” In an effort to dismantle and destroy the Navy’s spirit group, headed by Bill the Goat, West Point sends in the War Tubas to spearhead the operation.

This leads to some absurd shots of West Point cadets in flak and kevlar pieing doors and clearing hallways with tubas. The video even has a night vision scene where they stack up outside of a room presumably at the Naval Academy where the audience can hear the Star Wars theme song playing in the background — a head nod to the Navy’s own movie spoof.

The two teams will face off in person on Dec. 12 at Philadelphia’s Lincoln Financial Field. In the meantime, their hilarious Youtube battle continues.