You know that stick to the left of your car’s steering wheel? That thing you push either up or down?... 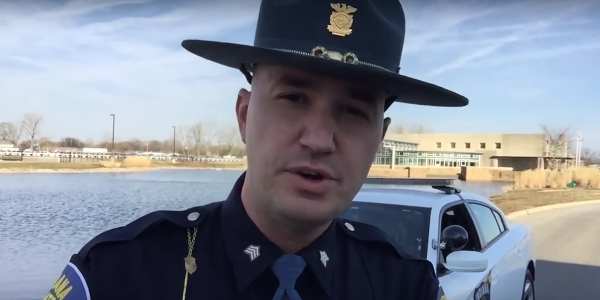 You know that stick to the left of your car’s steering wheel?

That thing you push either up or down? Oh. You didn’t know it was there? Then that’s probably why an Indiana state trooper has gone viral with a hilarious public service announcement about turn signals. Or, as he calls them: “The often forgotten, incredible safety feature that is standard on all vehicles.”

Sgt. John Perrine of the Indiana State Police posted the video on his public Facebook page on Friday afternoon, and it has quickly scooped up more than 11 million views and been shared more than 230,000 times.

Perrine is the public information officer for the Indianapolis district. His Twitter followers know him for his love of emojis.

He’s apparently never met one he didn’t like — or use.

He begins his new, 1 minute and 16 second video by saying that the auto industry “has made incredible advancements on technology and safety in vehicles, but what if I told you there was a feature on every car that is standard that will not only help prevent crashes, but also help prevent road rage?”

Then he takes the viewer inside his patrol car.

“To the left side of your steering wheel, there’s a stick that comes out – it’s pretty incredible, it’s called a turn signal,” he says.

Then he shows what happens when you use that turn signal — a turn light flashes on the outside of the car.

“It may require that you put down your coffee or your cell phone or whatever you have in your hands so that you can safely drive,” Perrine jokes, sort of.

He adds: “This is not only the right thing to do, it’s not only against the law not to use it, but it’s the courteous thing to do.”

Ok folks, this is not a drill…

Did you know ?can ✍️ you a ?for not clearing ❄️off all your ? windows?

Many of the more than 10,000 comments on his Facebook page — he tweeted the video, too — come from people who appreciate his efforts because they’ve seen what happens when people don’t use their turn indicators.

“A lot of people don’t believe in this and it is a great video because I’m not sure if people know how meaningful this is,” wrote one woman.

“It drives me crazy when I see idiots not using their signals or zoom out in front of you just to turn into the next parking lot. Again no signal.”

Some responded with as much snark as Perrine dished.

Wrote one guy: “Do all vehicles have that feature???”