You know how it goes. It’s the freakin’ weekend, you toss back a few with your buddies, and then maybe... 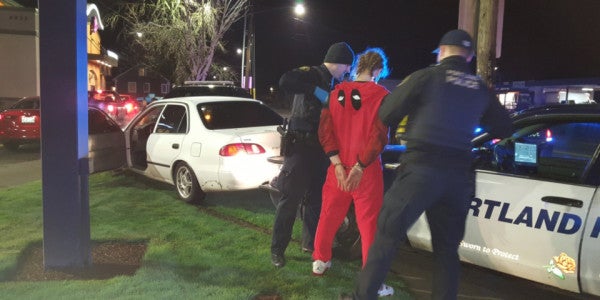 You know how it goes. It’s the freakin’ weekend, you toss back a few with your buddies, and then maybe a few more. At some point, blammo: You got accelerated healing powers, a one-piece lycra suit, and a hankering to do to a cheesy gordita crunch what Limp Bizkit did to music in the late ’90s.

And you almost made it. Almost! Almost:

Lots of DUII drivers out tonight. This one was passed out behind the wheel on the lawn at Taco Bell wearing #Deadpool PJs. pic.twitter.com/RbU8q4ddb7

On Monday morning, Sgt. Pete Simpson, spokesperson for the Portland Police Bureau said the driver was 18-year-old Torren Alexander Cooksey. He was booked into the Multnomah County Jail on charges of DUII and Reckless Driving.

“My understanding is that he was passed out in the car when police encountered him,” Simpson added.

He was so damn close to that drive-thru window. Is this a hero I see before me?

Torren Alexander Cooksey, 18, of Portland, you may be super, but you are no hero. You are all of us, minus the foresight to download Uber.