We Found The Best MOAB Memes The Internet Has To Offer

The internet was (predictably) awash with hot takes after the United States military dropped a GBU-43/B Massive Ordnance Air Blast... 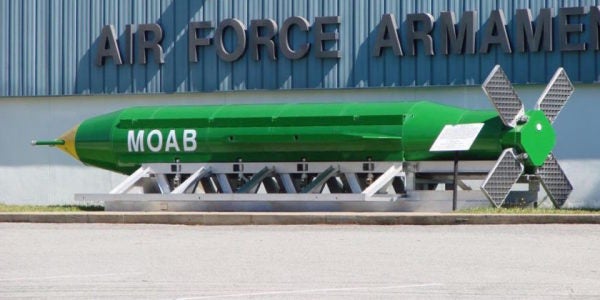 The internet was (predictably) awash with hot takes after the United States military dropped a GBU-43/B Massive Ordnance Air Blast bomb on Islamic State fighters in Afghanistan. Some speculated that the MOAB would drastically disrupt warfighting for the next four years, while others complained that the “MOAB is the epitome of lethal patriarchy.”

But we’re not here to discuss any of that.

Related: Pentagon Releases Footage Of The ‘Mother Of All Bombs’ Strike On ISIS In Afghanistan »

We’re here for the memes, because one thing is certain: The mother of all bombs has given birth to a kiloton of amazing memes. Because when America blows something up, it is every American troop’s duty to meme the shit out of it. Thank you for your service to these Facebook and Instagram accounts that won the Internet.

Then there’s the matter of how is becomes was.

Word to your mother.

Speaking of… sad day for bombs.

Really nice tunnel you’ve got there, or had there…

Did I fucking stutter?

Though the news wasn’t greeted with elation by everyone, some were… triggered.