These Photos Perfectly Sum Up The Phrase ‘Embracing The Suck’

Military life can be a lot of things: rewarding, empowering, life-changing. It can also be shitty, exhausting, wet, dry, hot,... 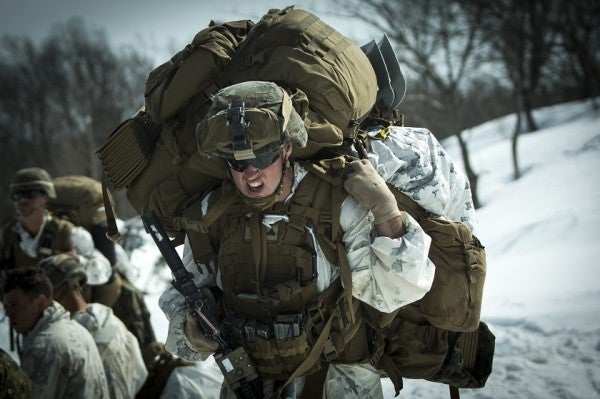 Military life can be a lot of things: rewarding, empowering, life-changing. It can also be shitty, exhausting, wet, dry, hot, cold, sticky, slimy, extremely dangerous, exhausting, filled with small paychecks, huge debt, brutal training, and a whole bunch of other crap — which is where phrases like “embrace the suck” get their true meaning. There’s a certain kind of pride that comes with always being able to win the “who has it worst” contest, which is what embracing the suck is all about.

In mid-March, the Marines of 2nd Battalion, 3rd Marine Regiment took part in Forest Light March as part of a bilateral training exercise meant to strengthen their partnership with the Japanese military. That’s just a nice way of saying that they went through a brutal ass-kicking hump in the snow in Sekiyama, Japan.

Related: These Stock Photos Supposedly Portraying Service Members Are All Kinds Of Fail »

Based on the photos, some of these guys embodied the time honored military tradition of “sucking it the fuck up,” while others still have a ways to go.

U.S. Marine Staff Sgt. Brett Tate gives exactly zero fucks, shit, just look at the field ‘stash. Utterly unphased by the cold, as if he’s just enjoying a day on the beach, he has fully embraced all that sucks — stripping down in frigid weather and bearing his “Mom” and moto tattoos for all the world to see. It’s a practiced art form, and takes a while to master. Clearly.

Meanwhile, Lance Cpl. Christopher Kedjejian is having a miserable time, almost like he just realized his recruiter lied to him. Or he just spent the last 20 miles trekking through four feet of snow in zero-degree weather asking himself why he didn’t listen when his father told him to go to college instead of joining the Marines. He might just have an easier time if he remembered to put his gloves on.

In any case, these two are still having a better day than the lieutenant, who looks like he’s lost again.